Punjab Cricket Association (PCA) President I S Bindra tonight "fervently hoped that the game of cricket is cleansed and restored to its pristine heritage in the wake of the present cricket detritus and rightful resignations."

Bindra in a note on his website, the page of which has been e-mailed to the media, said, "The pubic deserves and demands it, and most of all, the gentleman's game cries for it. We must bring back the credibility and love for the game."

The PCA Chief said, "The shenanigans of the recent times run the risk of bringing ignominy to the game of cricket which was built brick by brick by many. After decades of being a part of the great game of cricket, and having served Indian cricket in various positions, I believe that this is the worst crisis faced by Indian Cricket."

"My central postulate is that the sanctity and credibility of the game should be our focus and be preserved at all costs. The game is bigger than any individual," he said without naming any individual. 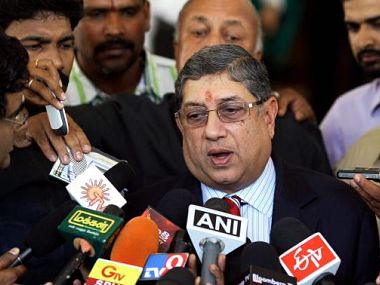 He said, "Looking at the immediate issue at hand, the breaking news on television that the ICC had warned Gurunath Meiyappan of the company he was keeping. I have three important points to make."

Bindra said, "First, if the ICC did warn Meiyappan it is obvious and apparent that they must have informed the BCCI about it. Therefore, who were the officials in the BCCI who were informed by the ICC and how did they handle this key input? If they did nothing with the information from the ICC, the BCCI is guilty of gross misconduct and the ICC needs to confirm this claim."

He said that he recounted a concrete instance that leads him to the second point. "On India's tour of Sri Lanka in 2010, due to the LTTE operation, a retired general of Sri Lankan army was given charge of the Indian team's security and he ensured the tightest security arrangements, including installing CCTV cameras on every floor and the lobby of the hotels where the Indian team was staying," Bindra said.

"At night an official travelling with the team had taken a girl into the room of an Indian player who is also a prominent member of CSK team for last six seasons. It was observed on the footage that the girl spent the night prior to a game. It was so alleged that girl was sent by an individual on ICC's list of suspected bookies. This incidence was in gross violation of security as well as anti corruption regulations.

On the basis of General's report, the Sri Lankan Board reported these sordid details in writing to the team Manager along with documentary evidence and also informed anti corruption official of ICC. It is understood that under pressure from an official of Indian Board, the Sri Lanka board was made to withdraw the report.

Mihir Bose filed this story in The Sunday Times, which was rubbished by the BCCI spokesperson, and Sri Lanka Cricket Board was arm-twisted into denying the whole episode," Bindra claimed.

He said, "The above narrative leads me to the second major point that could this incidence have nipped an emerging malfeasance in the bud and are we paying the price now?" Bindra said, "And my third contention is that, in the last eight years since present President took over, an employee from India Cements has invariably been posted with the Indian team at home and abroad. Now think of this, it means that these people are outsiders and are not subject to the ICC Code of Conduct. They are also out of the BCCI's
purview.

These people are privy to the Indian team's strategy meetings and dressing room deliberations and they have access to all classified information. India Cement nominees are not BCCI officials/employees. The precedent of a private company involved in intimate cricket insider information is highly controversial and has some serious and thought provoking implications," Bindra added.