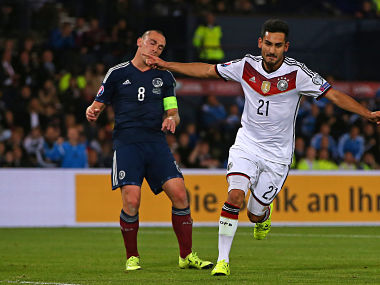 The Germany international, who is ruled out of Euro 2016 due to a knee injury, becomes new City boss Pep Guardiola's first signing since taking over from Manuel Pellegrini.

The 25-year-old, who has won 16 caps for Germany, scoring four goals, confirmed the news in a video posted on City's official Twitter feed.

"Hello City fans. You have been tweeting me for a long time and now I officially announce that I am a Manchester City player. Hope to see you soon," said Gundogan, whose Dortmund contract had been due to expire in June 2017.

Gundogan, who made 157 appearances for Dortmund over five years, added on mcfc.co.uk: "I'm thrilled to have signed for Manchester City.

"When I learned of City's interest my heart was set on coming here and things have moved very quickly.

"I have loved my time with Borussia Dortmund and I would like to thank the club and the supporters for the five very happy years I spent there.

"They gave me a platform to play on and I became a better player because of the belief, patience and trust they showed in me.

"Now I have a new challenge and that is to achieve great things with City. The opportunity to work with a coach like Pep Guardiola is something I am really looking forward to and I am flattered to be the first signing the club has made this summer.

"I can promise the City fans I will give everything to help us win titles both in England and the Champions League. These are exciting times.

"I have my best years ahead of me and I think we can achieve great things together. I can't wait to begin this new chapter in my career."

Manchester City's director of football Txiki Begiristain added: "Ilkay is an excellent addition to our team and we are delighted to have him on board.

"He is an intelligent and versatile midfielder who can operate in a number of different roles. I think our supporters will enjoy his work ethic and technical ability and I believe he will be a very important player for us in the coming years."

Man City finished fourth in the Premier League, qualifying for the Champions League next season.