At the county ground in Derby, Veda Krishnamurthy walks in with her team in some trouble. Wickets have fallen with a good chunk of overs still to go. One more wicket would expose the lower order, and may spark a familiar collapse. But she is oblivious to the pressure, like an ostrich is to the rotation of the earth. She notches up a quick-fire half century.

You might think this is a description of Veda’s game-changing knock against New Zealand, where she smashed 70 off 45 balls in a match which was like a virtual World Cup quarter-final for India. 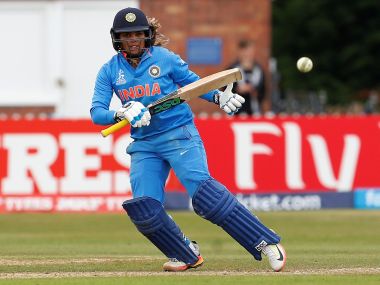 There are, and always have been, only two sides to Veda when it comes to batting: Dearth Veda, and Darth Veda.

Dearth Veda is the 38 percent of her 31 innings where she has been dismissed for single digits. That is an alarmingly large proportion. Hit or miss. Break or bust. Either the blob, or the beast. That is Veda for you.

But when she does stick around, she doesn’t muck around. At peak Darth Veda, her bat makes arcs like a certain red light-saber, and does just as much damage. Her career strike-rate is better than Harmanpreet Kaur’s, who is considered India’s most destructive batter. And she has the power game that calls for hard hats in the crowd.

There is more to Veda than just her batting. She knows how to crush her Instagram game, and seems to be one of the few Indian players who actually operate their own Twitter account. She is the team’s unofficial translator, becoming the voice of her teammates at presentations. Her communication skills are so good, that one of the commentators said she might have a job behind the mike when she’s done playing. Except…

Ahead of India’s match against South Africa, Veda was asked how India stack up against them . She called India “more compact”. She also said South Africa’s players were “individually really good, but when it comes to collective performance they really depend on their main players to do well”.

It was the archetypical Veda statement, just like her signature shot, the inside out lofted drive over cover: brash, bold, confident, with a touch of hubris, and more than a little outrageous. Three days after she said that, South Africa scored 273 against India, with seven players contributing with double digit scores. India were bowled out for 158. Veda scored 3 off 14 balls.

Perhaps a job behind the mike is not the best idea. Her batting and fielding speak louder.

Veda made an impact in the World Cup even before she played. That’s right, she didn’t play every game. There was too much Dearth and not enough Veda leading into the World Cup, and Mona Meshram was among the runs. So Veda wore the fluorescent bib and ran the drinks.

WHAT A CATCH! This is quite simply stunning from Veda Krishnamurthy as India remain unbeaten on their way to the #WWC17 Qualifier final! pic.twitter.com/O81B2JrQ2P — ICC (@ICC) February 20, 2017

Look up videos of Veda Krishnamurthy fielding online. You will find one that she tweeted in 2016 from the Asia Cup, where she takes a stunner at slip. But more than the catch itself, watch what happens before. She is standing almost upright, hands folded across her chest till the last possible moment. As if she has a thousand better things to think about until she really needs to focus. The sheer insouciance of it is possibly more stunning than the athleticism that follows. But that is Veda in 10 seconds: So good that she doesn’t seem to have to try hard.

When she does badly though, it’s the lack of ‘appearing to try hard’ that hurts her. More than once in her career, whispers of a casual and lazy attitude have dogged her, which she has had to dispel with runs.

Good luck keeping her out of a game though. In India’s opening game against England, Smriti Mandhana left the field after a nasty dive on the boundary. Veda came on as 12th man. In a game where India dropped three catches, Veda held on to a sliding diving effort on the boundary to finish the match and launch India’s campaign.

New Zealand probably thought Mona must be some player to keep Veda out. New Zealand know all about Veda.

The last time Veda played an ODI against New Zealand, she rescued an Indian innings that was going nowhere at light speed. She came in at 57 for 3 in the 22nd over, and by the 30th, it was 78 for 4. She had lost Mandhana, Kaur and Mithali Raj.

But instead of creeping into the shell the rest of the team was occupying, she decided to — in the spirit of John McBride — retaliate first. She top scored with 63. It may not seem like much, but it is significant, because her strike-rate of 73 was about 30 runs better than all the other batswomen. No one else’s crossed 50. And the knock came in a pressure game; it was the third of the ICC Women’s Championship ODIs, with the previous two ODIs split 1-1. She took the team to 180, only getting out in the last over of the game. It eventually proved insufficient.

On Saturday, her efforts were not wasted.

In India’s last game against Australia, Veda was run out without facing a ball. She was one of five wickets India lost for 17 runs at the end. After a Punam Raut century, India failed to get the push they needed, and fell about 25 runs short of where they wanted to be. Australia strolled past their target like they were walking along the Bristol Harbour on a sunny day.

The story at Derby was different though. In India’s virtual quarter-final, Veda walked in when India had just lost two wickets in a row in the batting power-play. In her first four balls, she looked like she could get out in four different ways. Off-spinner Leigh Kasperek and New Zealand skipper Suzie Bates were doing their best to keep her on strike. There were two fielders in the point region, two in the covers, besides three more in the circle. There was only one possible way for her to respond: give in to the adrenaline junkie in her, who was itching to jump off the cliff just to see how high it is. She stepped out and hit the bowler over mid-on. The shot calmed her jitters, and she seemed in control after that, if a little buzzed.

With her style of play, the opposition get chances every so often. New Zealand had one when she was on 32, but fluffed it. Veda duly took 16 single-handed runs from the same over, and 17 from the next for good measure. She and Raj helped India take 90 runs from the last 10 overs, part of 108-run partnership with Raj that ran along at 8.3 runs per over.

Come Thursday, Veda will be back at the ground where it all began, for the biggest game of her life. There are pressure games, and then there are semi-finals of World Cups. In all likelihood though, she is not going to be too bothered about the occasion, at least not until the last possible moment. Beware the athleticism that follows.