Chandigarh: Punjab Chief Minister Captain Amarinder Singh on Friday congratulated Harmanpreet Kaur for her excellent performance that steered India into the final of the ICC Women's World Cup in England.

In his congratulatory message, the CM said Kaur — who hails from Punjab's Moga district — has done the state proud by becoming the second-highest scorer for India in women's ODIs. 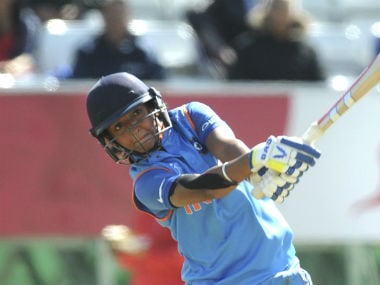 Harmanpreet Kaur struck 20 fours and seven sixes in her unbeaten 171 against Australia. AP

The chief minister said that it was a matter of great honour for all Punjabis that Harmanpreet had carved a niche for herself in international cricket with her sheer hard work and dedication.

He hoped that Harmanpreet's superb accomplishment would go a long way in inspiring other girls to strive for excellence.

Wishing her a bright future and success in her life, the chief minister expressed the hope that this 'Daughter of Punjab' would bring more laurels to the state in the field of sports.

He also congratulated the parents, friends and relatives of Harmanpreet on her rare feat. The star Indian batswoman's residence was a venue for celebrations following her whirlwind innings.

Harmanpreet Kaur's 115-ball 171 not out helped India post a daunting 281/4 in a match that was reduced to 42-overs-a-side after an early spell of rain. The Australians then kept losing wickets at regular intervals, and a heroic last-wicket partnership worth 76 between Alex Blackwell (90) and Kristen Beams (11) wasn't enough to prevent the defending world champions from bowing out of the tournament with a 36-run loss.