Australia and England were the overwhelming favourites at the start of the ICC Women’s World Cup but the performances of India and South Africa forced many people to think that both semi-finals and final can be exciting if there's not much gap in terms of quality. 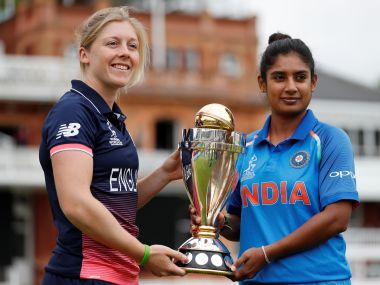 All three matches went down to the wire and teams who showed composure in pressure situations, ended up winning.

India were three down for 191 in the World Cup final, chasing 229 runs and both the batswomen at the crease were set. You can expect a team to win the match in this situation 99 out of 100 times but this was the World Cup final. England showed their experience of playing in big matches over the years and once Punam Raut fell, India kept losing wickets under pressure.

“They were batting brilliantly, credit to them, they've had a great tournament. But we knew that if we stayed on till the end and brought the rate up over 5 or 6, we would be in the game,” England captain Heather Knight said after the match.

England were the only team to score 300-plus runs more than once in ICC Women’s World Cup 2017. They have added ten 300-plus scores in Women’s ODIs so far, which is also a record.

West Indies were the only team to be dismissed under 50 runs in the recently concluded Women’s World Cup.

Chamari Attapatu’s 178* runs from 143 balls against Australia at Bristol is the third highest in an innings in Women’s ODIs and the second highest in a Women’s World Cup match.

Chole Tryon’s fifty from 25 balls against England Women at Bristol on 05 July, 2017 is the second fastest known fifty in Women’s World Cup.

Deandra Dottin’s century against Pakistan Women at Leicester on 11 July, 2017 is the second fastest known century in Women’s World Cup.

Dane van Niekerk holds the record of taking most wickets as a captain in a single edition of Women’s World Cup. Karen Smithies also picked up 15 wickets in Women’s World Cup 1993 as an England captain.

Katherine Brunt bowled the most no. of maidens and dot balls (269) in the recently concluded ICC Women’s World Cup.

Anya Shrubsole is the only player to take a six-wicket haul in the final of an ODI World Cup (men or women).

Amy Satterthwaite is only the second fielder to take eight catches in a single edition of Women’s World Cup. The other player who has achieved the same feat is Lydia Greenway. She did it in 2009 Women’s World Cup.

Sushma Verma was the only wicket-keeper to claim more than 10 dismissals in ICC Women’s World Cup 2017.

– Mithali Raj is now the highest run-getter in Women’s ODIs. She went past Charlotte Edwards’ record of 5992 runs against Australia Women at Bristol on 12 July, 2017. She has amassed 6190 runs from 186 ODIs in her career so far.

– Dane van Niekerk is the only player to take a four-wicket haul without conceding a run in an international match. She achieved the milestone against West Indies Women at Leicester on 02 July, 2017.

– Deepti Sharma is the first player to score 200-plus runs and take 10-plus wickets in a same ODI World Cup (men or women) at an age of 20 or less.

– Mithali Raj has scored 10 fifty-plus scores in Women’s ODIs in 2017 which is the most by a batswoman in a calendar year in ODIs.