Kolkata: Hosts Mohun Bagan played out an entertaining 1-1 draw with table-toppers Chennai City in a Hero I-League fixture on Saturday. 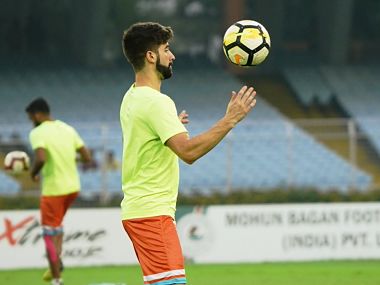 Sony Norde's individual brilliance came to the forefront once again when he drew the first blood for the hosts, through an extremely well-crafted goal in the 50th minute.

Chennai City also showcased their class through an exquisite goal from their Spanish midfielder Nestor Jesus in the 81st minute.

The hosts pressed hard from the start but lack of good finish eluded them from scoring.

The new combination of Elhussieny in the midfield along with Sony Norde and Pintu Mahata with Henry Kisekka as the lone striker seemed to be working as they made a few close attempts to score.

Full marks to Chennai City's Spanish goal-keeper Nauzet Santana who ensured that the hosts can't find the back of the net.

Chennai, on the other hand, were unable to break into the organised defensive line of Mohun Bagan and that did frustrate them.

In the 31st minute, visiting coach Akbar Nawaz brought in Mashoor Shereef in place of Romario Jesuraj and it increased the pace of the game.

Mashoor, with his height, combined well with the Spanish trio of Sandro, Nestor and Manzi to make some interesting moves inside Mohun Bagan's box, but couldn't find the finishing touch to manage a lead.

The high-paced and entertaining first half came to an end with the scoreboard reading goalless.

The second half began with Chennai City FC again pressing hard but the Mohun Bagan defence was too tight and organised to let them in any form.

It was Mohun Bagan who started the actual invasion with Norde leading the mantle when his first attempt was beautifully saved by Chennai City's Santana.

A couple of minutes later, Norde received a pass from Kisekka a little ahead of the centre line.

He made a beautiful run to the left of the Chennai box to cut back beating the Chennai defenders and then unleashed an angular shot which curled in leaving Nauzet Santana stranded.

Chennai City, thereafter, made numerous attempts to equalise, but could not find the back of the net until the 81st minute, when a long ball from Eslava was collected by Nestor, who made no mistake in capitalising on the first defensive lapse by the Mariners.

The game suddenly changed gears and in the final 10 minutes, Chennai City came close to scoring at least four times taking advantage of the breaking defence line of Mohun Bagan but could not find the back of the net until the final whistle.

In the 90th minute, a stunner of a shot from Sandro hit the crossbar keeping the visitors' hope of winning both the duels in Kolkata at bay.

Mohun Bagan will now clash with arch-rivals Quess East Bengal on December 16, while Chennai City will fly to Panchkula to face defending Champions Minerva Punjab FC on the same day.