Hungarian Grand Prix: Sebastian Vettel 'not stressed' after lead is cut short ahead of weekend's action

Budapest: Sebastian Vettel says he is keeping calm ahead of a Hungarian Grand Prix weekend that could see the Ferrari driver surrender his Formula One championship lead to Mercedes rival Lewis Hamilton.

The German, a four times world champion with Red Bull, goes into the last race before the August break a point ahead of Hamilton, who will take over at the top for the first time this season if he seals a record sixth win at the Hungaroring.

"I'm not stressing too much. On paper it should be a good race for us. Let's see how we get going," Vettel told reporters on Thursday. 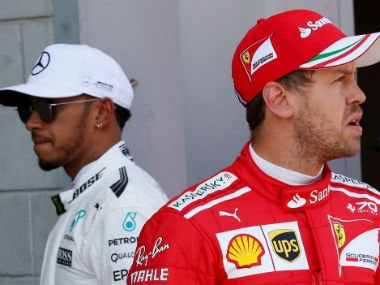 "I like the track, I'm just going to enjoy it. Everyone here, we know what we have to do and that's what we plan to do.

"The fact that it's the last race before the summer break or the first after Silverstone...doesn't change anything."

Vettel had a 25 point lead over Hamilton after Monaco in May but that has been whittled down progressively as champions Mercedes get on top of a tricky car that team boss Toto Wolff has compared to a diva.

Hamilton has won two of the four races since then, with Vettel failing to make the podium in three of them.

The Briton has also won more times than any driver in Hungary, scene of his first victory for Mercedes, and a pole position on Saturday would equal Michael Schumacher's all time career record of 68.

Vettel agreed Mercedes had done better than Ferrari of late but all was not doom and gloom.

"I think we need to look at the races. We didn't get the best races maybe in the last couple. Saying that, I think we were very close to a win in Austria, I don't think we were lacking any speed there and that's only two races ago," he said.

"Silverstone for sure was not the best weekend for us," added the Ferrari driver, who suffered a late puncture in that race that dropped him from third to seventh.

"You have a lot of races, some will be better and some will be worse. Maybe they were not fantastic but I am very positive," he continued.

"We come here and we know the car is strong, we know we have a chance to fight for victory and that's good news."