A lacklustre India had to sweat it out before pipping Ireland 3-2 for their third consecutive win in the men's competition of the Hero Hockey World League at the floodlit Major Dhyan Chand National Stadium on Thursday.

The Indians had to go through some anxious moments in the final minutes of the game to register the win, which consolidated their position at the top of the standings with nine points from three victories.

Meanwhile, the women's team strengthened its position on the top of the table with a dominating 10-0 win over Fiji in the Hero Hockey World League Round 2.

Rupinder Pal Singh (16th minute) and vice-captain V R Raghunath (39th) converted two penalty corners for India, but it was striker Dharamvir Singh, who scored the all-important winner for the hosts in the 56th minute of the game. 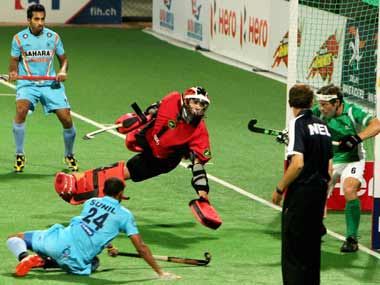 The Indians had to go through some anxious moments in the final minutes of the game to register the win. PTI

For the Irishmen, Conor Harte (27th) and Eugene Magee (51st) were the goal-getters.

The Indians were nowhere close to their best as they lacked in coordination and looked tired even as the Irishmen showcased fine exhibition in defending.

The Indians dominated the early share of exchanges and pressed hard for goals from the onset, only to be denied by a stubborn Irish backline.

The Indians were also not upto the mark with their penalty corner conversion rate as they could utilise just two out of the six set pieces they earned in the game.

It took India 16 minutes and four penalty corners to break the deadlock when Rupinder beat the Irish goalkeeper David Harte with a powerful low flick.

The Irishmen, however, drew parity 11 minutes later, from their third penalty corner, which they earned in quick succession. Conor scored with a reverse hit after the visitors went for variation.

With the scoreline locked at 1-1, the Indians came out all guns blazing after the change of ends, mounting numerous raids into the rival citadel, which though were thwarted by an alert Irish defence.

But the Indians were once again in for a shock as Ireland equalised in the 51st minute, much to the disappointment of the sparse crowd present at the stadium.

Dharamvir saved the day for his side and ensured full point from the game when he scored with a reverse hit from top of the D after he was brilliantly set up by Mandeep Singh.

Thereafter, the Irishmen went all out in search of the equaliser and gave India a few scares when they earned three penalty corners in succession in the final minute of the game. They, though, wasted all, much to the relief of the home team.

After a much-needed rest on Friday, India will play China on Saturday, while the second-placed Irishmen will be up against lowly Oman.

"We should have scored more goals today because we got plenty of opportunities. We knew Ireland would give us tough fight as they are a top ranked team and most of their players either play in the Dutch or German league," he said.

"We have to be cautious against China because they are an unpredictable side," Nobbs said.

With the win, India moved a point clear of top seeds Japan, who were held 1-1 by Russia earlier in the day.