Catch all the scores and updates from the Finals of Ultimate Table Tennis 2017 where Falcons T.T.C. square off against Shazé Challengers to win the maiden UTT title.

This will be remembered for a long, long time!

Championship point for Falcons! Annnd Li Ping has hit it long! FALCONS T.T.C. ARE THE CHAMPIONS OF FIRST EVER ULTIMATE TABLE TENNIS

Ying sweeps the match 7 (3-0). Mukherjee put on brave fight but couldn't get past World no. 9. Despite the clean sweep by Challengers, Falcons lead 13-8 in the tie

Ghosh's return goes long and end of brilliant match!  Pitchford's earlier shot came of the the top of the net that induced the error and that is how it goes. Earlier Pitchford won a super point by blocking Ghsoh's strong flat hit. Falcons a point away from clinching the first ever title! Tie: 13-5

Wu Yang wins the match 3-0 the revenge has been avenged! Falcons 11-5 in the tie. 3 points away from the title.

Gem! Two stunning forehand shots by Sanil Shetty does it for himself and Lee Ho Ching. From 8-9 it was only Shetty to finish the game 8-11. Falcons must be ecstatic! They take the mixed doubles 3-0. Falcons have huge lead of 7-2

Wu Yang runs away with the final game as well.She takes game 3 (11-3). A clean sweep. This are three vital points as today whoever reaches to 14-points first take the title! Falcons TTC 4 points to Challengers' 2

A walkthrough of what each of these glittering trophies are for

Saves one but that isnt enought. Shetty is pumped as soon as the ball goes long! He has clinched a point for the Falcons! Super start to the finals! Tie: Challengers 2-1 Falcons

The Falcons win the maiden season of Ultimate Table Tennis and that draws curtains on the inaugural table tennis league in India, which has been thoroughly sensational. UTT did manage to capture the imagination of the people over its course of the three weeks. Comprising of several top-notch performance, amazing display of grit, skill and talent and more importantly it gives us a peek into the future of Indian table tennis.

What we just witnessed in the past three weeks is exactly what happens when there is an opportunity provided for such splendid sportsmen and sportswomen. The pioneering edition has set the precedent of what we can expect in the coming years and if the 1st season is anything to by it is going to be nothing less than awe-inspiring.

We at Firstpost would like to thank you for joining us on the live blog. Hope you liked it as much as we enjoyed bringing it to you. We will continue with covering more and more such fascinating events, tune into Firstpost.com for more updates, analysis and opinions. Take care and goodbye.

The winning team lines up to collect their winning medals. 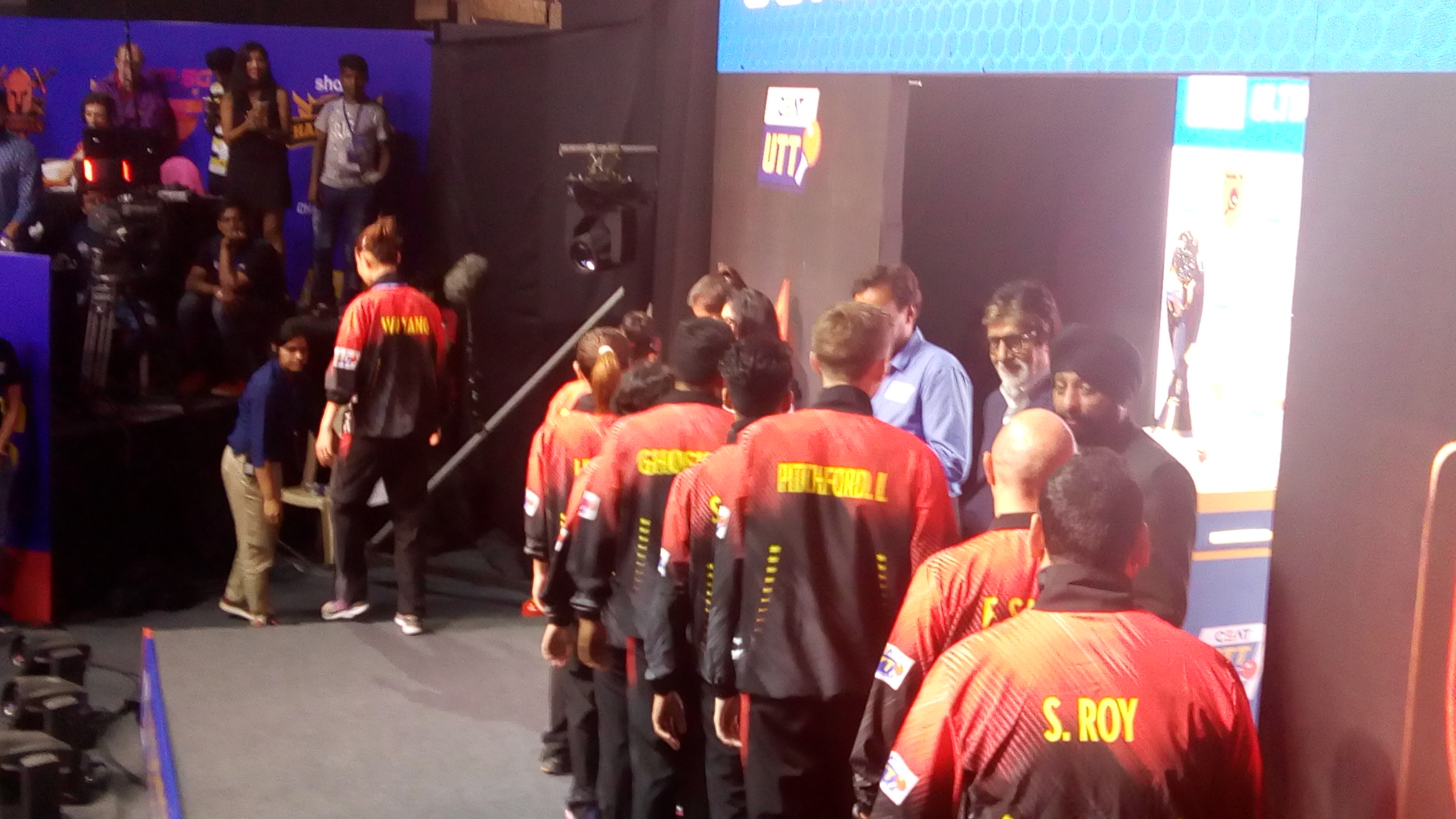 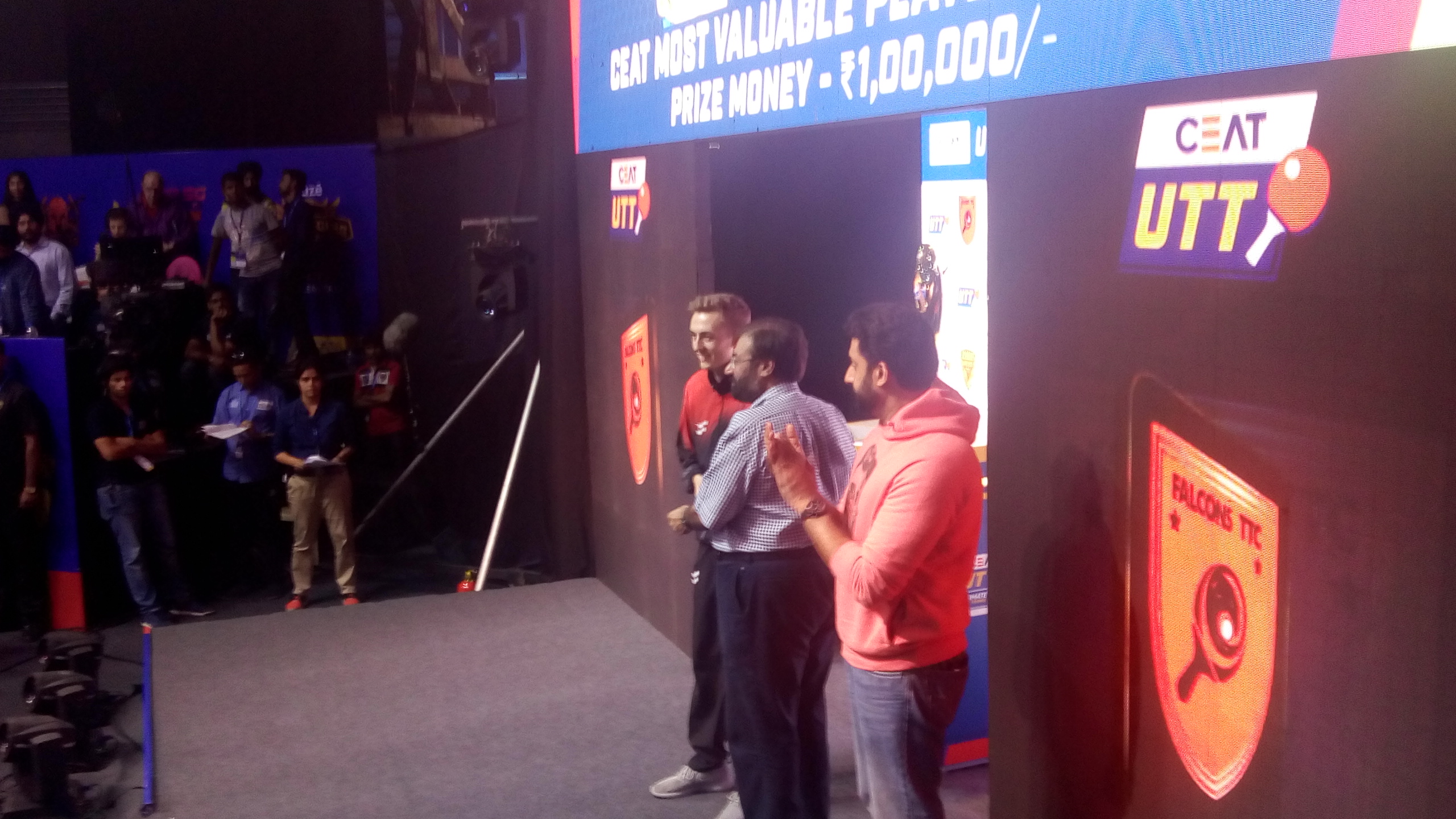 Wu Yang wins the Most Valuable Player (Female) and the Ultimate One for scoring most number of points. 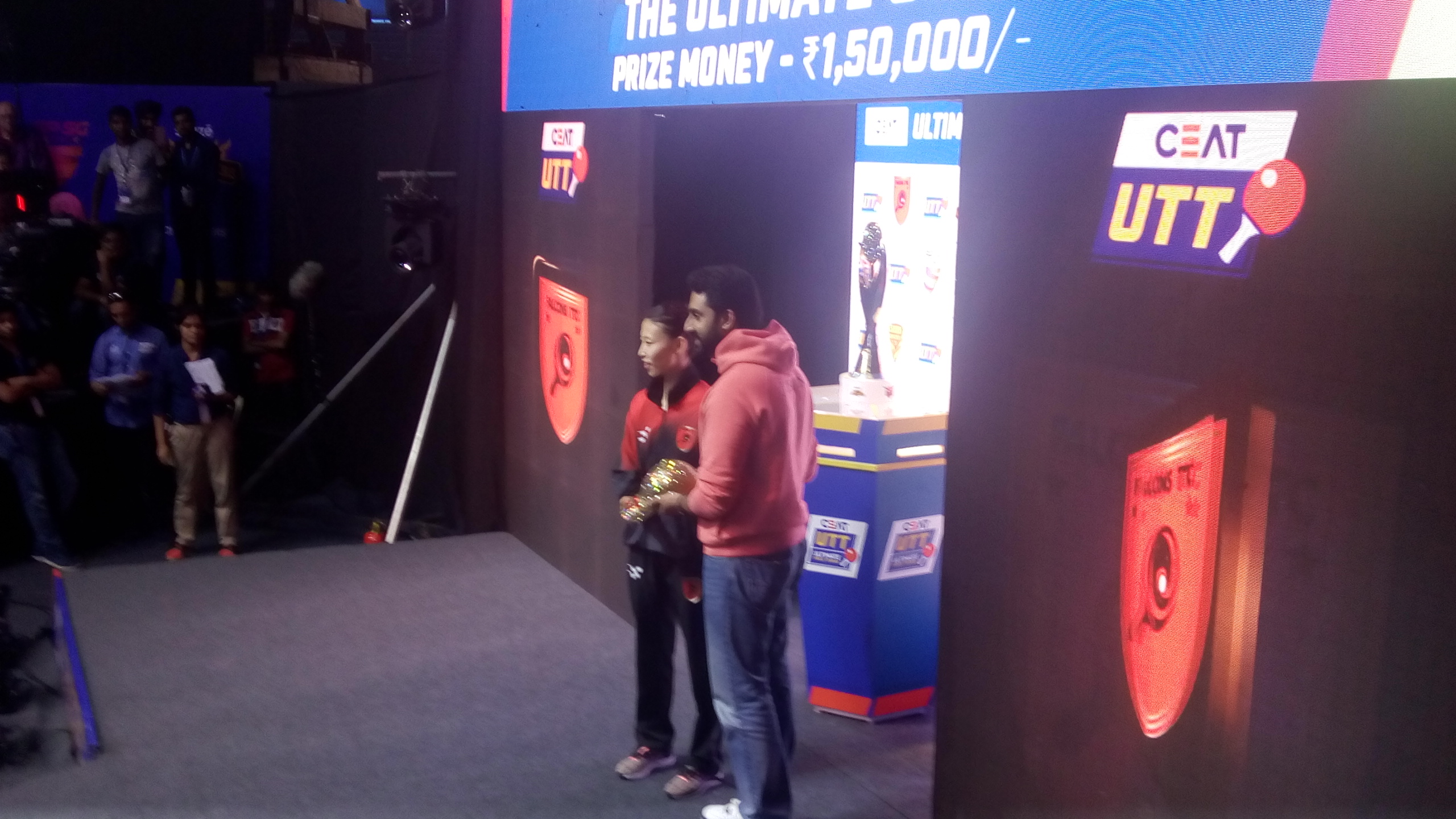 Gacina wins the award of Super-server winning 56 points just through his serves. 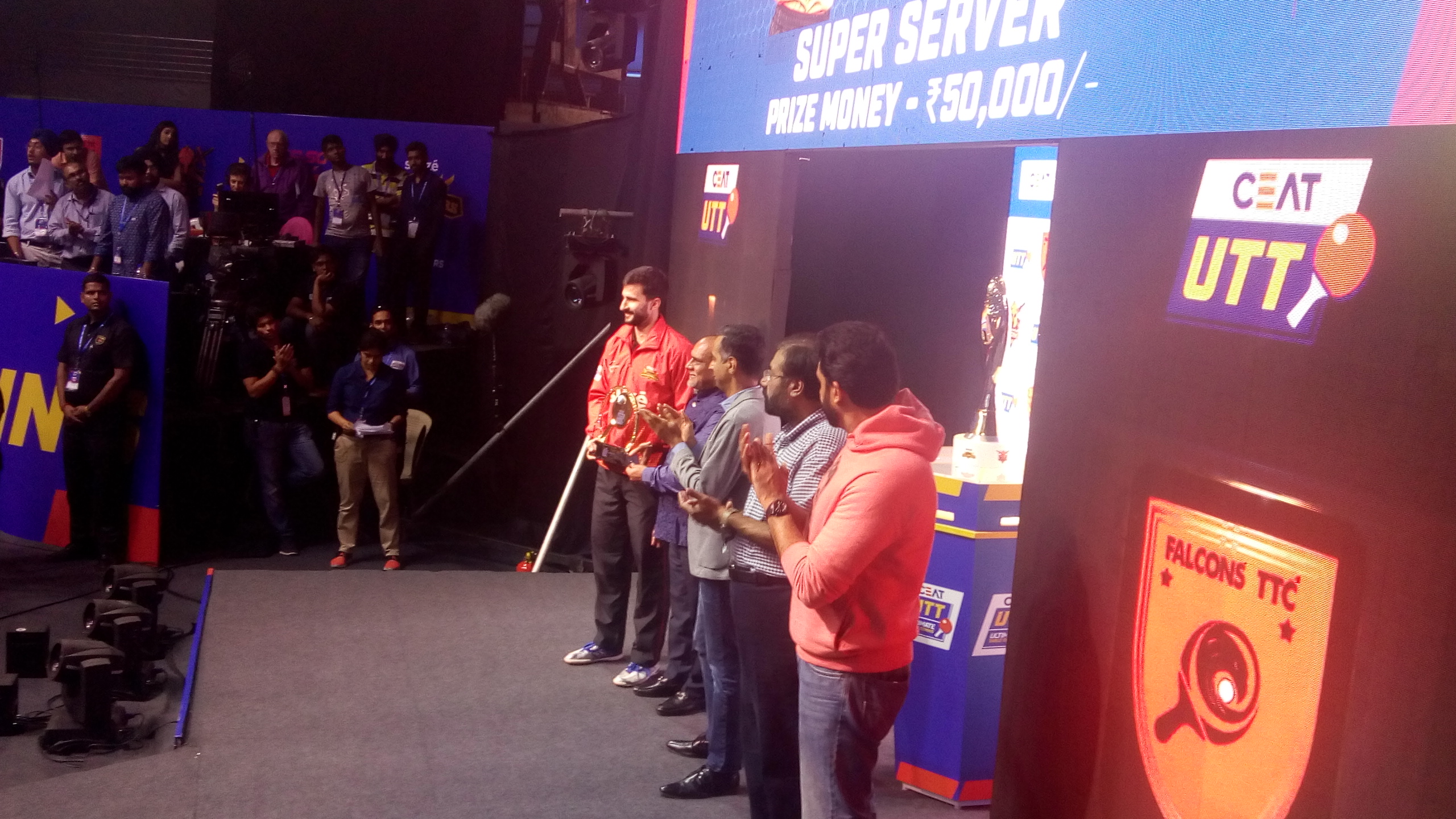 Falcons are the first champions of @UltTableTennis , the winning point and celebrations. pic.twitter.com/04z1stNpMm

A word for the runner's up, Shaze Challengers, who played well throughout the tournament but just came up against a formidable Falcons side who displayed some high quality table tennis!

This will be remembered for a long, long time!

Preview: After more than two weeks of mouth-watering, jaw dropping and emotion-invoking Ties, it’s finally come down to this – Falcons TTC face Shazé Challengers in the final of  UTT at the NSCI Stadium in Mumbai. Statistically, they are the two best teams in the tournament, and there’s no doubt that it’s going to be a cracking contest on Sunday.

Falcons TTC finished the league table with 78 points before coming up with a stellar show to thump DHFL Maharashtra United a couple of days ago. They were rock solid in every department of the Tie and they will be keen to replicate those performances one last time in the tournament.

From delivering consistently for the team to bailing them out whenever they were in trouble - Wu Yang has been a lynchpin for the Falcons in the tournament. Her strong transformation from defence to attack has been a nightmare for the opposition players, as she has struck 51 winners. The 25-year-old’s unmatched consistency would be a big boost for the Falcons, heading into tonight’s final.

Factor in Liam Pitchford’s contributions, that have been equally important for the team. The Englishman won six out of his last seven Matches and he will be looking to carry his stupendous form in tonight’s final.

Sanil Shetty’s performances in the singles category have also caught plenty of eyeballs. The left-handed paddler though, has been vulnerable in the Mixed Doubles. Shetty and Ching have lost all their previous four Matches, and considering the impeccable form of Soumyajit Ghosh and Petrissa Solja, there’s no doubt that the Falcons pair will be in for a stern battle tonight.

Mixed with a great bunch of young and experienced players, Shazé Challengers have been the team to beat in the tournament. A bulk of team’s success in the tournament has been due to the astonishing form of Han Ying. The experienced German paddler has won all the 12 Matches that she has featured in so far, and most of her wins have played a definitive role in shaping the eventual result of the contest.

It remains to be seen whether her breath-taking form will help the team to win the inaugural edition of  UTT.

In addition to Ying, Andrej Gacina, Li Ping and Soumyajit Ghosh have also proven to be the stand out performers for the team so far. Falcons TTC have in-form players in the men’s division, so it’s important for the trio to carry their good form.

Having already tasted success against the Falcons in the group stage, the challengers will surely reflect on their previous performance to take some positives ahead of the big final.

Battle to watch out for

The Match between these two paddlers in the previous Tie has probably been the best Match of the tournament so far. Prior to the clash, Wu Yang had won 21 Games, but Ying not only put an end to that astonishing run, but also won the Match in three mouth-watering Games - 11-10, 11-10 and 11-10. There is no doubt that Yang will be looking to seek revenge and hand Ying her first defeat in UTT.

With two best teams in the tournament facing in the title clash, we’re in for a special show tonight. Shazé Challengers defeated Falcons TTC in the previous Tie, so they might have an edge in tonight’s final.

Government departments including the PWD will provide infrastructure related support to telecom companies in installation of these small towers, sources said