India beat Kenya 48-19. It was a clinical performance from the Ajay Thakur-led side. Kenya showed flashes of brilliance but it wasn't enough in front of a rampaging Indian side that found two new stars today in the form of Rishank Devadiga and Monu Goyat

It's been a walk in the park for India. Rishank Devadiga, Deepak Hoods have been excellent. Ajay Thakur hasn't been at his scoring best but has allowed the in-form Devadiga to take the lead in raiding. Good half from India.

Well, the next big match is on now. Both Indian and Kenyan teams are out on the mat

It ends 54-24! Good late surge from Argentina but to be fair Iran had taken the foot off the gas. Still, plenty for the South Americans to take from it. Iran in strong position in Group B with two wins out of two.

India vs Kenya up next!

It is time for the opening match of the day between Iran and Argentina. Mohammad Ghorbani leads a new-look Iran against newcomers Argentina

That's it from us today. India puts up yet another clinical showing at the Kabaddi Masters to go to top of Group A with ten points. With Ajay Thakur not exactly in prime form, he let the younger raiders to take centrestage. Rishank Devadiga and Monu Goyat shouldered the responsibility with two Super 10s to ensure India pick up a facile win

India have no match on Sunday with Pakistan taking on Kenya in the Group A encounter. Iran are on top of Group B with ten points from their two matches.

Join us on Monday for the next India match

Here's the post-match press conference of the India-Kenya match

Emphatic win for India. Rishank Devadiga and Monu Goyat the star of the show

India sit pretty at top of Group A with 10 points. India play Pakistan next on 25 June 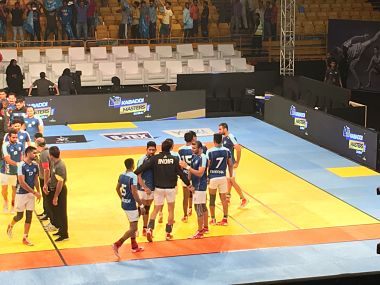 India beat Kenya 48-19. It was a clinical performance from the Ajay Thakur-led side. Kenya showed flashes of brilliance but it wasn't enough in front of a rampaging Indian side that found two new stars today in the form of Rishank Devadiga and Monu Goyat

Rishank! What a way to mark your first start for your country. A super raid to put Kenya on the cusp of an all out again. A super 10 on full debut. What a player!

Sandeep Narwal's raiding style excites the crowd. However it doesn't end well for the Indian all-rounder as he is tackled. Sandeep is an entertainer wherever he plays.

Wow! Monu Goyat almost wipes off Kenya in a single raid. He seemed doomed with a heap of Kenyan players over him, but he somehow gets his right foot over the line 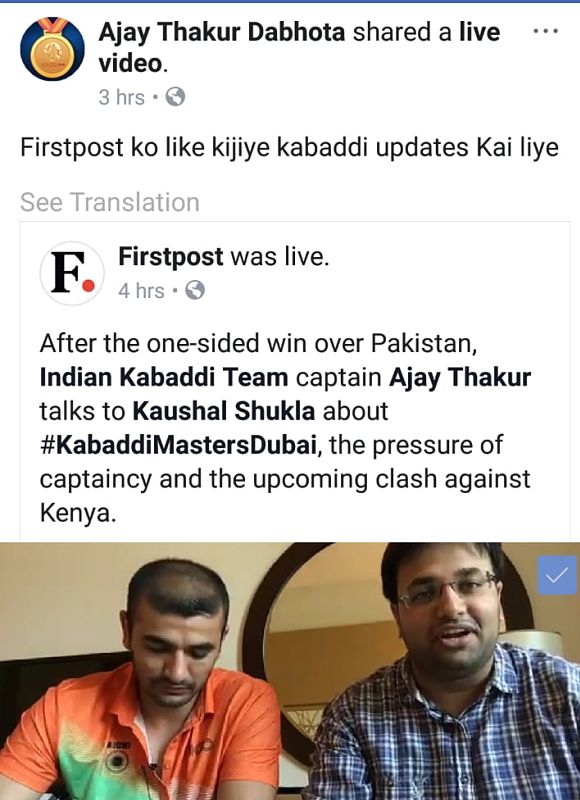 It's been a walk in the park for India. Rishank Devadiga, Deepak Hoods have been excellent. Ajay Thakur hasn't been at his scoring best but has allowed the in-form Devadiga to take the lead in raiding. Good half from India.

Rishank Devadiga and Monu Goyat are doing their hopes of getting into the first team a world of good.

Meanwhile, Raju Lal Chaudhary who has not been very impressive is replaced by Mohit Chhillar

Match 1 Review: India stood up to their reputation, thrashing Pakistan 36-20 n the opening match of the Kabaddi Masters Dubai at the Al Wasl sports club on Friday.

The Ajay Thakur-led side started off sensibly, gauging the weakness and strength of Pakistan in the initial minutes before thrashing their arch-rivals to notch up a tsunami of points.

Reeling under pressure, Pakistan gifted away some easy points as they lacked any coordination and confidence on the mat. Action from the India vs Kenya match. Agencies

Both teams started on a positive note but after few minutes, Pakistan sent back India's star raider Rahul Chaudhary to take a one-point lead. But Indian skipper Thakur equalised handsomely through a gentle touch on the opponent's side.

At one point India got a chance to reduce the opponents to three players but Sandeep failed in doing so.

A comfortably placed India then had the opportunity to hand Pakistan all out and they did that in style. Rohit, who was the substitute for Surjeet, came for the raid and inflicted an all-out to make it 14-8 with only four minutes remaining.

In the 18th minute, Rohit got a brilliant opportunity to make his opponents reel on the floor and he made it with an excellent raid to force Pakistan to play with one player.

By the time, the first half ended India deservingly made a lop-sided affair with a whopping 22-8 lead.

The change of sides saw Thakur making it worse for Pakistan as he inflicted another all out in the opening second of the second half.

It was clearly visible that the Pakistan players were feeling the heat as they gifted some easy points, helping India swell their lead to 27-8.

But Pakistan did not give up easily, threatening India by getting four players out but Rohit splashed water on their plans and took some crucial points to maintain the lead.

Towards the end, Pakistan managed to sneak in a few points but that was not enough to overhaul India's lead as the Thakur-led side kicked off their campaign in style.

Sea conditions will remain unsafe for shipping and fishermen in central and north Bay of Bengal from Friday to Sunday.