Surjeet finishes with a super raid as India hand Kenya a schooling in every sense of the word. Kenya did well in the end to reduce India to two men, but lacked the experience to finish the job.

Kenya now need to beat Pakistan by more than 7 points to qualify for the semi-final. India go into semis with 100% win record

End of the first half. India completely dominant. Can Kenya save some pride in the second half?

India enter the semis with a 100 percent win record. They were hardly tested in the league matches winning each of them with massive margins. None of the teams gave India any kind of fight and the coach Srinivas Reddy has tested almost every member of the squad ahead of the Asian Games.

India now face Republic of Korea in the semi-final.

That's it from here and see you all once again for the semi-final and hopefully the Finals coverage from Al Wasl Sports Stadium, Dubai

Surjeet finishes with a super raid as India hand Kenya a schooling in every sense of the word. Kenya did well in the end to reduce India to two men, but lacked the experience to finish the job.

Kenya now need to beat Pakistan by more than 7 points to qualify for the semi-final. India go into semis with 100% win record

SUPER RAID! Obiero Victor has been Kenya's most impressive player. With that super raid, Kenya have a chance of enforcing an all out. That would be a big positive for Kenya from the match
Obiero goes out on the lobby and he is out. Surjeet gets a touch point in the next raid. India revive two men and Kenya's hopes of enforcing an all out may well have disappeared

Kenya score a point after a long time and it's met with sarcastic cheers from the crowd.

ALL OUT! India are relentless. Their raiders have been on top of their game again. No team seems to know the way to tackle this three-pronged attack

Argentina entertaining the crowd with some moves of their own. The South Americans have been a breath of fresh air off the field.

On a different note, Argentina play Nigeria is crucial game in the FIFA World Cup tonight. Will the blue and whites be dancing at the end of the night? 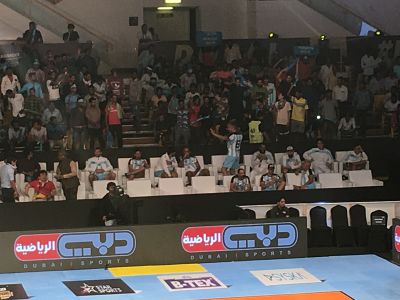 End of the first half. India completely dominant. Can Kenya save some pride in the second half?

Rahul Chaudhari is being given a run. Rishank Devadiga who has been impressive all throughout the tournament gets a deserved breather. Reddy wants all his players in form ahead of semi-finals

Laventer Oguta takes a timeout. Kenya need calming down. India have made a habit of coming storming out of the blocks and no opponents have managed to

deal with that threat. Oguta's words appear to have made a difference as Kenya catch Pardeep Narwal to record their second point of the game

What an ankle hold from Surender Nada to halt the big David Mosambayi in his tracks. Pardeep follows it up with the first touch point of the game. The ones introduced by Srinivas Reddy are making a mark early on
ALL OUT! Pardeep Narwal seems to be a man on a mission. He has looked like his usual menacing player in this game so far and Kenya are struggling to cope with it.

Preview: World Champions India and runners-up Iran booked semi-final berths from their respective groups to continue their supremacy in the six-nation Kabaddi Masters at the Al Wasl Sports Complex.

India once again put up a dominating show to prevail over Pakistan 41-17 for their second successive victory against their arch-rivals in their second and final leg group A exchange.

India had thrashed their bitter foes 36-20 in the opening game of the six-nation meet on 22 June. Ajay Thakur-led India take on Kenya for the second time in the Kabaddi Masters Dubai 2018. Agencies

For India, the most expensive player Monu Goyat, who came in as a substitute in the second half topped the raid charts with seven points.

Rohit gave India a 6-1 lead inside five minutes with a super raid and a couple of minutes later, inflicted the first all-out.

Pakistan had no answers to the attacking and deceptive style of Rohit Kumar, Rishank Devadiga and skipper Thakur.

There was further setback for Pakistan when captain Nasir Ali was down with an injury in a 17th minute action, but fortunately for them, he returned in the second half.

In Tuesday's match India take on Kenya. In the previous encounter both these teams, Thakur and Co emerged victorious without breaking a sweat. Even in today's match, the result isn't expected to be any different.