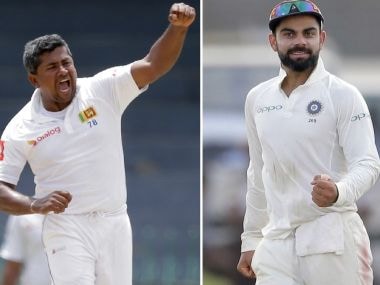 Stumps, Day 3: Classic example of how batsman mess it right at the end. How many times do we see this? In an attempt to see off the final few minutes of the day, the batsmen get extra cautious and end up committing a false stroke. Mukund is trapped in front, it was a quicker one from Gunathilaka and Mukund's bat never came down. He asked for a referral and the replays confirm the on-field umpire's call. With that, the umpire removes the bails to mark the end of Day 3. India go into Day 4 with a hefty 498-run lead with seven wickets still in hand.

Day 2 review: Pacer Mohammed Shami's twin strikes in a single over put India in the driver's seat in the opening cricket Test as Sri Lanka lost five quick wickets to totter at 154/5 at stumps on the second day at the Galle International Stadium on Thursday.

The home side lost three wickets in quick succession to find themselves trailing by 446 runs in their first innings, with former skipper Angelo Mathews (54) and Dilruwan Perera (6) unbeaten at stumps.

Shami dealt crucial blows to register figures of 2/30 while fellow pacer Umesh Yadav and off-spinner Ravichandran Ashwin bagged a wicket each. India opener Abhinav Mukund made things worse for the hosts by effecting the run-out of in-form Upul Tharanga.

Reduced to 10 men after the loss of all-rounder Asela Gunaratne, who was ruled out with a broken thumb on Wednesday, the hosts were off to a shaky start, losing opener Dimuth Karunaratne (2), debutant Danushka Gunathilaka (16) and Kusal Mendis (0) in the first 15 overs.

Karunaratne was trapped leg before by Umesh while Gunathilaka and Mendis were sent back in the same over by Shami.

Tharanga (64) and Mathews then steadied the ship with a 57-run stand for the fourth-wicket before Mukund's brilliant throw sent back the newly-appointed Sri Lanka One-Day International (ODI) skipper.

Mukund's throw from silly point to stumper Wriddhiman Saha resulted in Tharanga's run-out, who reached the crease but his bat bounced while making the ground.

Incoming batsman Niroshan Dickwella (8) was caught brilliantly by Mukund at silly point after he failed to block the ball and managed only to get the outside edge off a delivery by tweaker Ashwin.

Pandya's half-century was laced with five boundaries and three sixes while Shami slammed three sixes in his cameo with a strike rate of 100.

Resuming the day at 399/3, the overnight duo of Cheteshwar Pujara and Ajinkya Rahane batted cautiously with the Saurashtra right-hander crossing the 150-run mark while Rahane too got to his half-century.

But the tide was destined to turn soon. Pujara was the first to go when pacer Nuwan Pradeep produced an excellent delivery which moved slightly away after pitching at a perfect length on the off-stump.

Pujara was totally outfoxed as the ball took the outer edge on its way into the gloves of Lankan wicket-keeper Niroshan Dickwella.

Rahane was the next to go. The Mumbai batsman mistimed an attempted drive off Lahiru Kumara only to see the ball take the outer edge and Dimuth Karunaratne pull of a superb diving effort at first slip.

The visitors plunged into further trouble when Wriddhiman Saha (16) and Ashwin (47) also went back in successive overs.

For the hosts, Pradeep (6/132) emerged the pick of the bowlers while fellow pacer Lahiru Kumara took 3/131 and skipper Herath bagged a wicket.