Saina Nehwal and PV Sindhu will be in action in the first round of the India Open 2017 on Wednesday. Follow our live blog for regular scores and updates.

Matches to watch out for in the second round:

We saw a different Kidambi today as he mastered the court with exuberance against Junpeng who relied mostly on his defence to bag points. With that win, Kidambi now faces third seed Viktor Axelsen in the pre-quarters of the India Open.

Kidambi Srikanth vs Zhao Junpeng
​
Kidambi has started the second game confidently as he leads 7-2 and looks pumped up to finish this tie early.

17-17! It is even stevens in the first game as both the shuttlers have displayed a great overall gameplay. The movement of Kidambi has been the highlight so far.

Spanish ace Marin floored Kim Hyo 21-17, 21-10 whereas the second seed Sung Ji thrashed Krishna Priya 21-11, 21-13 in the first round of the women's singles event. Marin approached the game in a more attacking manner where she dominated the baseline of the court and Sung Ji, on the other hand had a balanced game.

Spanish ace Marin floored Kim Hyo 21-17, 21-10 whereas the second seed Sung Ji thrashed Krishna Priya 21-11, 21-13 in the first round of the women's singles event. Marin approached the game in a more attacking manner where she dominated the baseline of the court and as for Sung Ji, she had a balanced game.

Not a good day for Jayaram as he squanders his lead in the both the games and loses the tie. Axelsen's hand-eye combination and net plays did the damage as he restricting Jayaram from hitting jump smashes and crosscourt shots.

Jayaram 11-11 Axelsen! Everytime Jayaram gets in control, he fails to maintain the momentum and Axelsen is not the one to have mercy on his opponents.

In-form Marin has started off well and took no time to settle. Don't miss out on this one!

Sourabh played some fascinating forehand strokes to unsettle HS Prannoy's movement and win the tie in straight games. Notably, his net-flicks were also accurate as Prannoy was left out of position in the second game.

Ajay Jayaram vs Viktor Axelsen
​
Jayaram is giving a tough challenge to Axelsen as he leads 11-9 at the break of the first game. Interestingly, Jayaram also leads 2-1 in the head-to-head meetings against the Danish ace

Pranaav and Sikki have clinched the second round spot after an emphatic win in the first round of the mixed doubles event. The duo showed glimpses of their on-court awareness and shot selection which was too much for their opponents.

Pranaav and Sikki claim the first game 21-15 and look set to clinch the second. The duo didn't have a good All England campaign but a win in India Open would be career-defining

In the men's singles event, Sourabh Verma claims the first game 21-13 against HS Prannoy whereas Ajay Jayaram faces third seed Viktor Axelsen in the first round.

After a shaky start in the first game, PV Sindhu upped the ante to get the better of compatriot Pantawane in straight games and enter the second round. As mentioned earlier, Sindhu relied on her quick feet and drop shots to break Pantawane's confidence. She looks ready for the challenge at this Superseries event

It's 18-6 to Sindhu as she is just three points away from booking her place in the second round of India Open. Yet again, her unmatchable work rate has done the trick and has not allowed Pantawane to come back in the match

PV Sindhu is running away with the lead in the second game with her quick movements near the net and superb court coverage. Pantawane is finding it difficult to lob the shuttle from the forecourt.

Two Indian shuttlers square off in the first round of the women's singles event. Both Sindhu and Pantawane meet for the first time in a competitive match. All eyes will be on Sindhu as the third seed is yet to put her hands on the India Open

A fantastic overall performance by the Indian ace as she trounces Lee to cement her place in the second round. She looked confident throughout the match and her forecourt play was on point which more or less made the difference. Lee was bothered most of the times by Saina's low crosscourt punches as it made her stretch too much. For Saina, this win will boost her confidence and we may have a chance to witness the Saina-Sindhu showdown!

7-7! The second game looks even more competitive as both the shuttlers have started attacking freely, however, Saina tends to cover the baseline which can be useful for her to take control of her shots

Two-time India Open winner Saina Nehwal eases past Lee Chia Hsin with a barrage of jump smashes and quick net-plays which proved too much for her opponent. It looks like Saina is on her way to full fitness and it won't take long for her to start delivering her best show anytime soon

Saina Nehwal looks in great touch as she leads 7-5 against Lee Chia in the first game. Her positioning has been great so far

Saina Nehwal enters the fray to face Chinese Taipei's Lee Chia Hsin in the first round of the women's singles.

Manu Attri and B Summeth Reddy squandered their chance of making a comeback after losing in straight games. Seems like the duo lacks some coordination as they gave away points cheaply towards the end.

After losing the first game, Indian women's singles shuttler Rituparna Das is running away with the lead in the second 15-5 against Chinese Taipei's Chiang Mei Hui.

Both pairs are giving a tough fight at the moment with scores tied on 12 each. This is a huge opportunity for the Indian duo to regain their lost form in the Superseries event.

Tanvi Lad retires from the first round due to foot injury

Indian shuttler Tanvi Lad retired from her first round clash against seventh seed Nozomi Okuhara after suffering an injury during the first game.

Indonesian ace enters the second round after showcasing a brilliant combination of work-rate and base position control to win in straight games.

Ponnappa and Sikki Reddy dominated the match with astuteness and played some untouchable jump smashes to thwart their opponents. Also, the court-coverage and communication were perfect throughout the two games.

Ponnappa and Sikki are bossing the court at the moment as they lead 11-7 at the break of the second game against Gabby Adcock and Jessica Pugh. If the Indian pair manage to have the same rhythm, they can win this contest in straight games.

Ponnappa and Sikki outsmart their opponents with their decision-making and quick movements near the tramline. Super stuff by the duo so far

Defending champion Ratchanok cruises past Fangjie in straight games to enter the second round. It looked like Fangjie would claw back after leading in the second game but Ratchanok snatched it late to stop the Chinese shuttler.

Ratchanok Intanon wins first game: 21-15
​
Ratchanok has started well against Gao Fangjie and deservedly wins first game 21-15. She doesn't look completely fit but still can manage to get the better of her opponent.

Another clinical performance by Sameer Verma ensures his place in the second round of the Superseries event. He causes a major upset by defeating the fourth seed Son Wan Ho in straight games 21-17, 21-10.

Sai Praneeth enters the second round of the India Open after coming back from a game down to win a three-game thriller against Japanese Nishimoto.

Sameer Verma successfully makes a comeback to claim the first game after trailing at the break against Son Wan Ho. He looks in great touch!

Syed Modi International winner Sameer Verma faces the fourth seed Son Wan Ho in the first round. Both the shuttlers meet for the first time in a competitive match.

That's all from the first round of the Yonex-Sunrise India Open but make sure to come back as we will be providing the live scores and updates of your favourite shuttlers from the second round of this Superseries event in New Delhi. Hope you guys enjoyed the coverage. Till then, take care!

Matches to watch out for in the second round:

And a few from PV Sindhu's clash

.@Pvsindhu1 cruises into the second round of Yonex Sunrise #IndiaSS. Snaps from her match! #IndiaMeSmash pic.twitter.com/dwv68Uoceu

Some of the moments from Saina Nehwal's win in the first round!

We saw a different Kidambi today as he mastered the court with exuberance against Junpeng who relied mostly on his defence to bag points. With that win, Kidambi now faces third seed Viktor Axelsen in the pre-quarters of the India Open. 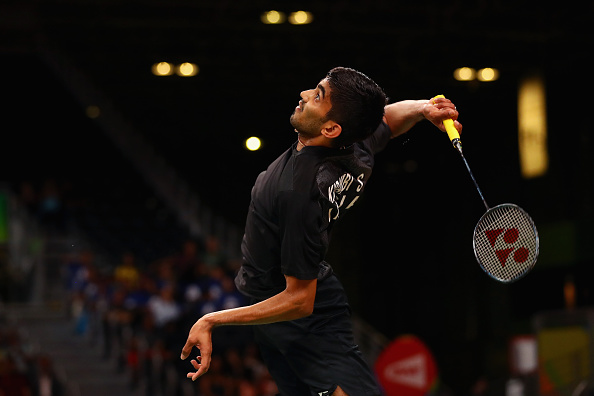 Kidambi Srikanth vs Zhao Junpeng
​
Kidambi has started the second game confidently as he leads 7-2 and looks pumped up to finish this tie early.

Massive boost for the former World no.3!

17-17! It is even stevens in the first game as both the shuttlers have displayed a great overall gameplay. The movement of Kidambi has been the highlight so far.

Preview: Olympic medallists Saina Nehwal and PV Sindhu will be the cynosure of all eyes when the seventh India Super Series badminton tournament gets underway after the qualifiers on Wednesday.

London bronze-medallist Saina will be one of the favourites at the Indian Super Series, an event she won two years ago to achieve the world No 1 ranking. "Delhi has always been special to me. I won the Commonwealth Games gold here and then won the Indian Open in 2015 and became the world No.1. So everything has been special for me. It is great to play in front of home crowd," said the current world No 8, who has been on a comeback trail after recovering from a knee injury.

"The competition has become tougher. But I have been playing well, even at All England, the match that I lost was 50-50. So all I can say is I will give my best and hope to do well," she added.

Rio Olympics silver-medallist Sindhu, who has been in rampaging form ever since her Olympic high, will also look to continue her good run at the Sri Fort Sports complex.

"I am looking forward to the event. It will be an exciting week, the competition is tough and I will give my best," the world No 5 said.

Saina and Sindhu had crashed out of the All England Championship after losing in the quarter-finals and the duo would be eyeing better results this week. They are likely to bump into each other in the quarter-finals on Friday if they manage to topple their opponents in the first two rounds.

Sindhu will open her campaign against a qualifier after her opponent -- Singapore's Xiaoyu Liang -- withdrew, while Saina will take on Chinese Taipei's Chia Hsin Lee in the opening round. Sindhu, seeded third, is likely to face Japan's Saena Kawakami in the second round, while Saina will probably take on Thailand's Pornpawee Chochuwong, an opponent she had beaten in the finals of the Malaysia Masters in January.

The two have met just once in an international competition -- at the 2014 Syed Modi International -- where Saina had won in straight games. Saina and Sindhu were on collision course for a place in the semi-finals of the Hong Kong Open last year before the senior pro suffered a loss. They had played against each other in the Premier Badminton League with Sindhu having an upper-hand this year.