Catch all the live updates from the Day 10 of the 2017 IAAF World Athletics Championships.

Take a look at how the medal table looks at the end of Day 10 and the World Championships.

They bring home the baton for another World Championships gold medal. Phylis Francis comes home to win in 3:19.02, and there's a huge roar as Emily Diamond brings Britain home in silver with a time of 3:25.00 ahead of Poland, who will happily take the bronze medal in 3:25.41.

Jamaica are out of luck yet again.

Barshim wins the men's high jump as Danil Lysenko’s third attempt of 2.35m ends in failure. Well, he can take the silver medal at least. On his last attempt, Barshim tried to go over 2.40m but fell short. Anyway, he is now the world champion. That's what matters.

Manangoi clocks 3:33.61 to beat his compatriot Timothy Cheruiyot, who records 3:33.39. Filip Ingebrigtsen finishes third and will settle for bronze in 3:34.53.
Kiprop, who has never hit top form this season, failed to deliver this time and finished in the ninth place.

Dani Stevens gets close but not enough as her final effort 69.64m can only get her a silver medal. France's Melina Robert-Michon confirms bronze medal position with a final effort of 66.21m and confirms Sandra Perkovic as gold medallist again.

What an incredible race this was and smart move there by Semenya! A patient first lap before an explosive turn of pace down the home straight to claim her third 800m gold. The South African runner breezes past first Ajee Wilson and then Niyonsaba and wins in a personal best time of 1:55.16.

It's time for the evening session on the final day of the Championships in London. Caster Semenya and Asbel Kiprop are expected to set the stage alight.

This brings an end to the afternoon session of the last day of the IAAF World Athletics Championships 2017.

Super Sunday will continue as the men's and women's 4x400m relays, women's 800m, men's high jump and men's 1,500m finals will be under way in the evening session.

Tragic ending for Great Britain's Tom Bosworth as he has been disqualified from the men's 20km walk. Sad scenes at The Mall as a distraught Bosworth settles on the sidelines

It is now time for the men's 20 km walk. Three Indians will be competing in this event.

At the age of 39, Yohann Diniz becomes the oldest male athlete in World Championships history to claim a gold medal.

World record-holder Yohann Diniz has extended his lead from 2:58 at the 25km checkpoint to 3:18 at 30km.

2:02:18 at half way for Henriques and Yin, that's well inside world record schedule.

Havard Haukenes of Norway has slipped off the back of the chase pack. Diniz is still leading with 1:48:24 at the halfway mark

The schedule for Day 10

That brings us to the end of a dramatic final day at the 2017 World Championships in London. Team USA was the dominant force throughout, winning a number of races and events. What made the world event even more interesting was the immense support from the crowd in the London Stadium. They were outstanding and so was Hero the Hedgehog – event's official mascot.

Hope you enjoyed our coverage in each of the 10 days. Thanks for sticking around. Good night!

Take a look at how the medal table looks at the end of Day 10 and the World Championships. 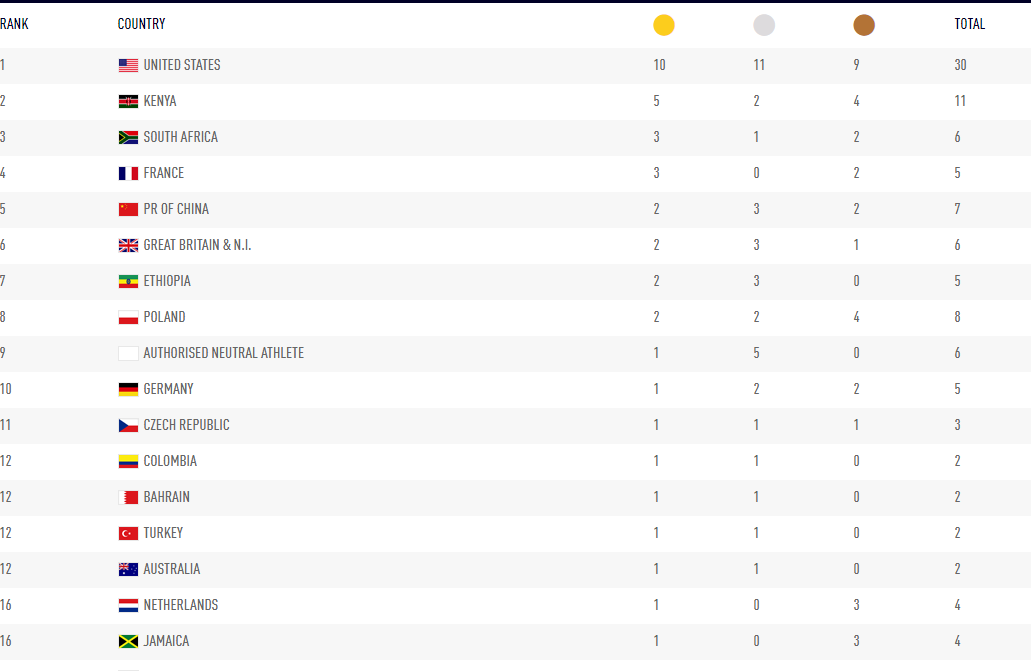 Usain Bolt is out on the track and the crowd has gone bonkers! 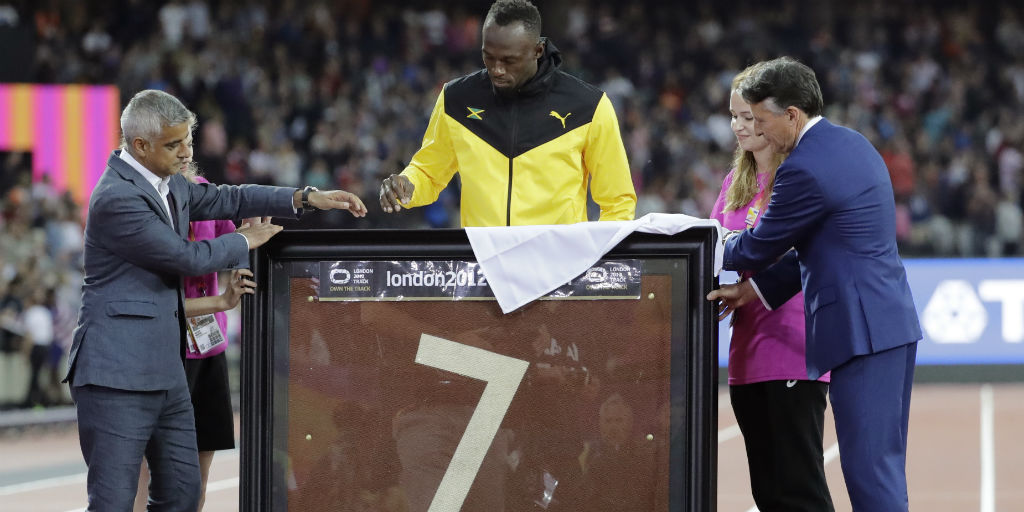 An incredible anchor leg from Lalonde Gordon clinches #IAAFworlds gold for Trinidad & Tobago in the 4x400m relay in London pic.twitter.com/25mCMGhmmf

Athletics will miss you, Usain! A true champion.

What a moment for Usain Bolt!

Presented with a piece of the track from #London2012. #BeTheNext pic.twitter.com/LWFlUUnXXK

What a great chase from the Trinidadian team. Incredible chase which went right down the wire. A much-deserved gold medal. More importantly, this was their first-ever gold. America win silver, and Britain take bronze in the final race!

America, Great Britain and Trinidad and Tobago. In that order, things are getting exciting in London.

With Team USA winning the 4x400m relay, Allyson Felix claims her third medal at these Championships and a second gold. The 31-year-old from Los Angeles holds a total of 16 world medals and has drawn level on 11 golds with Usain Bolt.

Preview:  Caster Semenya will attempt to reclaim her 800 metres title on the final day of action of the IAAF World Athletics Championships in London on Sunday.

The South African, who was awarded gold retrospectively in the event in 2011, already has one medal to her name this week, after winning bronze in the 1,500 metres on Monday.

However, it's the two-lap race that is her strongest, the event in which she won Olympic gold in Rio.

Semenya's race is among the highlights of the final session at the London Stadium.

In the women's 5,000 metres, Ethiopia's Almaz Ayana who won the 10,000 metres earlier this week is the firm favourite.

The other gold medal event is the men's 1,500 metres, where Kenya's Asbel Kiprop looks for his fourth world title and the men's high jump.

Having taken back the women's 4x100 metres relay title from Jamaica the day before, the United States will aim to repeat that feat on Sunday in the 4x400 metres relay.

The final event will be the men's edition of the race as hosts Britain go for one last gold.

The day's action begins across the city at The Mall, where the men and women's 50 kilometres race walk gets under way with the 20 kilometres versions following afterwards.