Catch the live scores and updates of the quarter-final matches at the Denmark Open as Saina Nehwal, Kidambi Srikanth and Sameer Verma eye place in the semi-finals.

The World No 1 pair dominated the Indian duo of Ashwini Ponnappa and Sikki Reddy 21-14, 21-12. They couldn't match the pace of the game and had a minimal on-court combination.

Sixteen minutes to the openings and the Japanese shuttler have proved their class with elan. Ponnappa and Reddy haven't really trouled.

The former champion beats reigning world champion Nozomi Okuhara 17-21, 21-16, 21-12 to enter the semi-finals. Saina used her strategies really well to stretch Nozomi Okuhara, who was forced to play from the back of the court. Full marks to Saina for adhering to the plan and hitting winners.

A proven fighter. Saina Nehwal gets the better of Okuhara after the interval to wrap up the second game 21-16. The Indian shuttler looks a little more aggressive, while Okuhara a little dispirited.

Can Saina go all the way?

The reigning world champion always maintained the pressure on Saina throughout the match. Saina did try to reply by staying resilient but Okuhara mastered the net game to go 1-0 up.

What a match, what a brilliant match! Both Srikanth and Sameer exhibited end-to-end stuff as all the three games presented the best of attacking badminton. However, it was the defending champion to had the last laugh as he registers a narrow 22-20, 19-21, 23-21 win.

Great stuff from Sameer to snatch the second game 21-19 from Srikanth. Time for the deciding game here. Both shuttlers look really pumped up after 48 minutes of attacking badminton.

Sameer must be feeling terrible after missing out on bagging the opening game by a whisker. He troubled the defending champion but it wasn't enough as Srikanth found his rhythm just in time.

22:22 (ist)
Kento Momota through to semis
World No 1 Momota gets the better of Khosit of Thailand 21-13, 21-9 in just 37 minutes to book a place into the last four of the competition. The Japanese shuttler is the favourite to win the tournament. Only a couple of shuttlers have managed to trouble him this season.
20:47 (ist)

Tai Tzu Ying beats Chen Yufel 21-13, 12-21, 21-9 to enter the semi-finals. The deciding game was all about Tai's stoke variation. She read Chen's movements perfectly to unsettle her opponent.

He Bingjiao trounces compatriot Cai Yanyan 21-13, 21-16. A rather easy win for the young Chinese shuttler.

Cai Yanyan vs He Bingjiao

That brings us to the end of today's play at the Denmark Open.

Overall, a good day for Indian shuttlers. Srikanth edges past Sameer to enter semis, while Saina brushed aside another Japanese shuttler Okuhara in three games. Hope you enjoyed our coverage. We'll be back tomorrow. Until then, take care!

The World No 1 pair dominated the Indian duo of Ashwini Ponnappa and Sikki Reddy 21-14, 21-12. They couldn't match the pace of the game and had a minimal on-court combination.

ICYMI: Here's a short clip to sum up Saina's win over Nozomi Okuhara in the quarter-finals.

15-7! Sikki Reddy is a little too slow at the net as she finds it difficult to break down the Japanese pair's defence.

11-7! A four-point lead for Hirota and Fukushima

Sixteen minutes to the openings and the Japanese shuttler have proved their class with elan. Ponnappa and Reddy haven't really trouled.

16-6! Eight straight points for the top seeds from Japan. They're a step ahead of Ponnappa and Reddy at the net.

Ashwini and Sikki are yet to gel as a pair. Hirota and Fukushima have combined well so far.

Next up, India's Ashwini Ponnappa and Sikki Reddy face Yuki Fukushima and Sayaka Hirota of Japan in the women's doubles quarter-finals.

The two pairs met at the World Badminton Championships earlier this year, where the Japanese duo won 21-14, 21-15.

The former champion beats reigning world champion Nozomi Okuhara 17-21, 21-16, 21-12 to enter the semi-finals. Saina used her strategies really well to stretch Nozomi Okuhara, who was forced to play from the back of the court. Full marks to Saina for adhering to the plan and hitting winners. 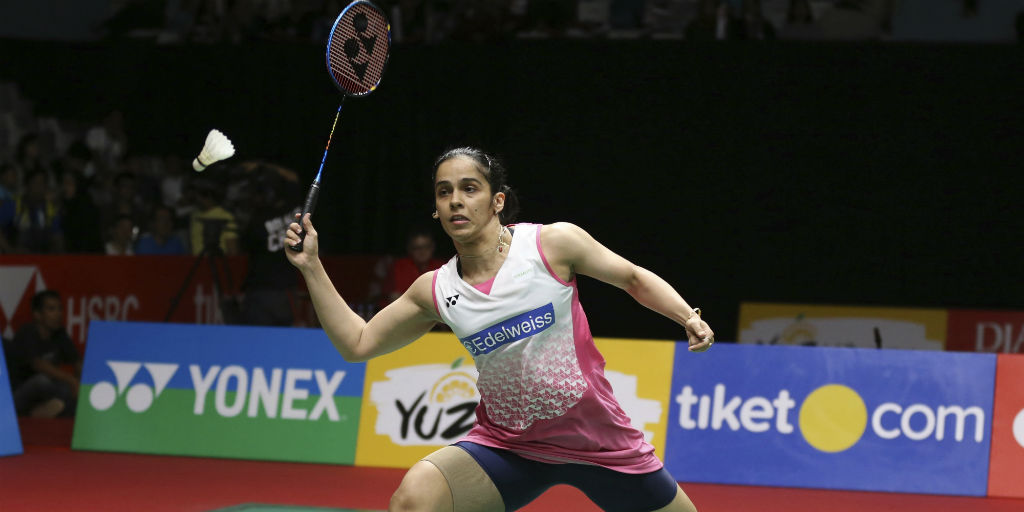 Star Indian shuttler Saina Nehwal stormed into the quarter-finals of the Denmark Open, defeating second seed Akane Yamaguchi in the second round match here on Thursday. In a match which lasted 36 minutes, the Hyderabadi shuttler outplayed Japanese shuttler Yamaguchi 21-15, 21-17 in straight games.

Right from the start, Saina seemed positive and played aggressively. Her swift court movements and powerful smashes helped her to advance in the meet.

Saina will now take on former world champion Nozomi Okuhara in the quarters.

In other matches, Sameer Verma advanced, defeating Jonatan Christie of Indonesia in a 23-21, 6-21, 22-20 marathon match of more than an hour.

In the women's doubles category, Ashwini Ponnappa and N Sikki Reddy also made it to the next round as they edged past Lee So Hee and Shin Seung Chan of South Korea. The Indian duo defeated their opponent 18-21, 22-20, 21-18 in an hour's match.

Kidambi Srikanth defeated the legendary Lin Dan for the second time in his career to set up an all-Indian quarterfinal against Sameer Verma at the Denmark Open here.

Dan, a two-time Olympic gold medallist and five-time world champion, is not the player he used to be but is still a force to reckon with. It was a fifth meeting between Srikanth and Dan and the Chinese great won the last time they played, in the quarterfinals of the 2016 Rio Olympics.

Srikanth had famously scored his maiden win over Dan to win the 2014 China Open.

After a tough match against the Chinese, Srikanth will have to play fellow Indian Verma in the quarterfinals to be held later on Friday.