Catch the live score and updates of the China Open 2018 as India's Kidambi Srikanth and PV Sindhu eye a spot in the semi-finals.

A humdinger of a game this one, really. Both Chen and Ginting were exceptionally brilliant, playing a glut of wristy and quick winners from every corner of the court. The young Indonesian shuttler eventually edged past the defending champion 22-20.

A tight affair in the first game between local boy Chen and Ginting of Indonesia. Ginting gave a tough fight to the two-time former world champion but succumbed to the wristy strokes from his opponent. Chen won the opening game 21-18.

The Chinese Taipei shuttler gets the better of former World No 1 Son Wan Ho in straight games 21-17, 21-14 to enter the last four. He will face the winner of the other men's singles quarter-final clash between Anthony Ginting and Chen Long of China.

The Chinese Taipei shuttler gets the better of former World No 1 Son Wan Ho in straight games 21-17, 21-14 to enter the last four. He will face the winner of the other men's singles quarter-final clash between Anthony Ginting and Chen Long of China.

The Japanese ace is clearly a level or two above the rest of the shuttlers on the circuit and he proves it time and again with stunning performances at the World Tour events. He reaches the semi-finals with a 21-9, 21-11 win over former champion Kidambi Srikanth, who had no answer to Momota's all-round display.

The in-form Japanese shuttler dominates the first game 21-9 against Srikanth, who is struggling to defend from the front. The Indian shuttler must tweak his style.

The ever-explosive shuttler reaches the last four of the women's singles event with a 21-10, 24-22 win over local girl Gao Fangjie. After cruising in the first game, Marin had to push her way past the defensive Gao to win the second stanza.

Terrific display by the former world champion to take the first game under her belt. Marin hardly broke a sweat to unsettle Gao, who is still struggling to read the pace at which her opponent is playing. A 21-10 win for the Spaniard in the first game.

That's all from us!

The Indian did well to win the second game, but looked flat-footed for much of the match, and was eventually beaten comprehensively by Chinese shuttler Chen Yufei in the third and deciding game.

There was a whiff of a comeback as PV Sindhu won a couple of points back-to-back, but Yufei has replied with an impressive spell to take her lead to five points. It's now or never for Sindhu.

Despite making a couple of service errors, Chen Yufei enters the mid-game break with a lead of three points. PV Sindhu has failed to find the form she had towards the end of the second game, and she's edging closer to elimination from the competition at the moment, as Yufei relentlessly piles on the pressure,

The third game has looked more of an even contest so far, with both shuttlers doing their best to outwit the other and reach the semi-finals.Sindhu has been edging it, but Chen Yufei looks more involved than she did in the second game, where she was a passive spectator at times

PV Sindhu wins the second game to make it level!

The Indian ran away with it in the end, winning six consecutive points to seal the game at 21-11. She looks much more settled and will look to carry the momentum into the decider. 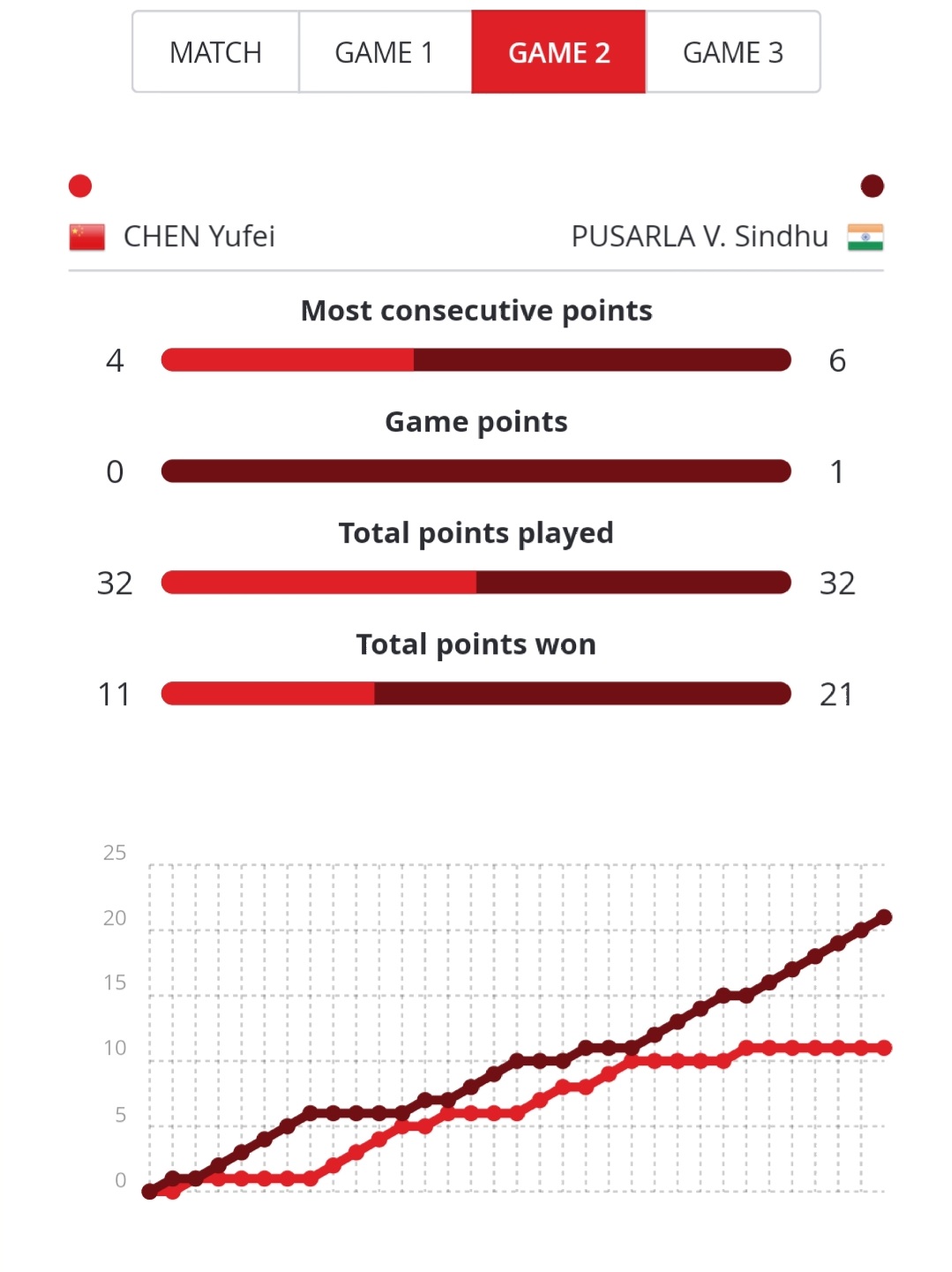 The tides seem to have turned in favour of the Indian, who has begun to assert herself in the match. She looks much more sprightly and is covering the court in quick, long strides, frustrating Chen Yufei.

PV Sindhu heads into the mid-game break in the lead! The Indian has done well to regain her composure, but Chen Yufei is not making it easy for her. Every single point so far has been hard-fought, and Sindhu will need to keep up the intensity if she wants to win the second game and restore parity.

PV Sindhu comes out swinging! The Indian has reacted well to her loss in the first game, racing to an early lead in the second. The momentum is in her favour and she needs to keep it that way.

In numbers, how Chen Yufei won the first game 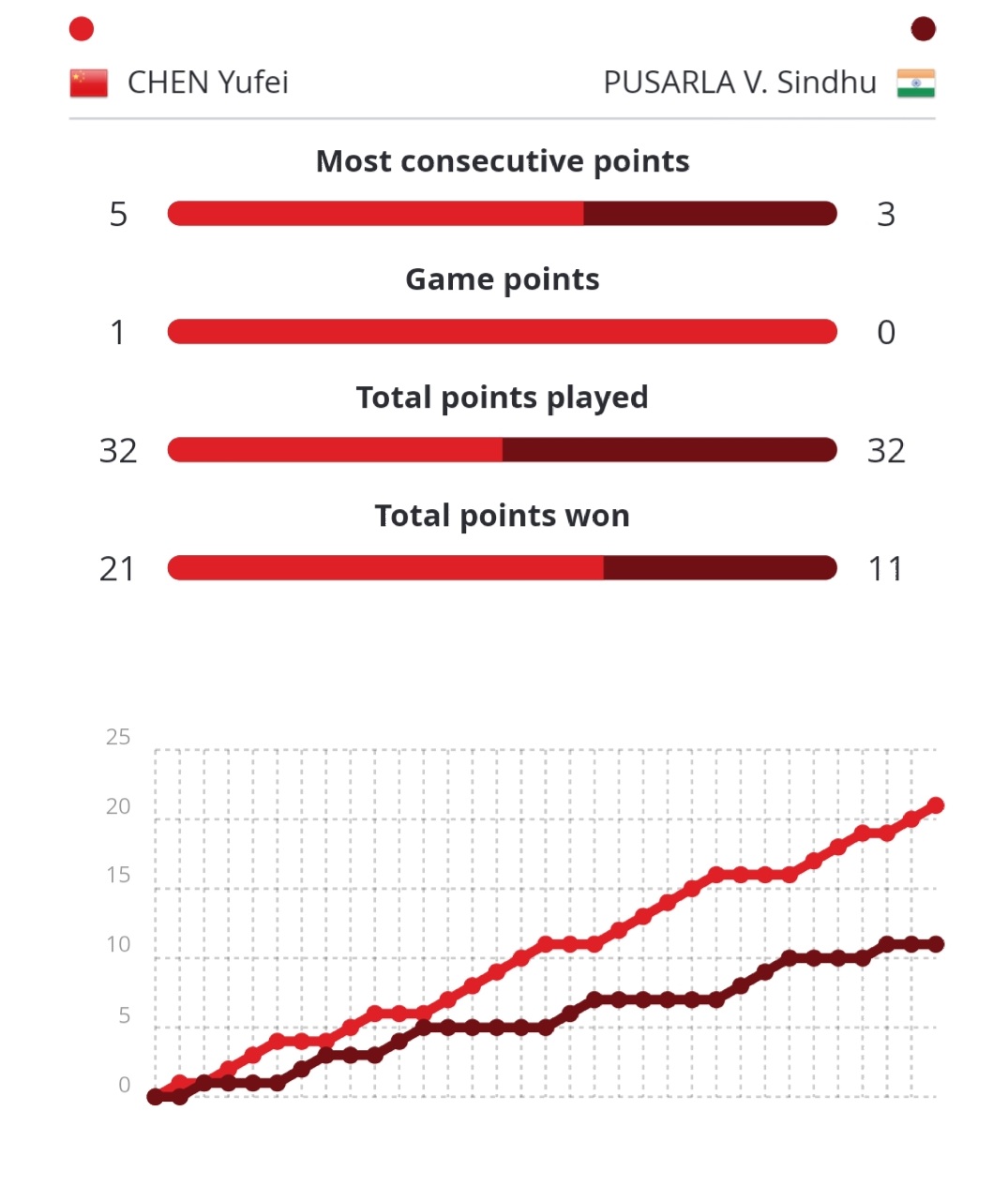 Srikanth defeated Suppanyu Avihingsanon of Thailand 21-12, 15-21, 24-22 in a marathon match which lasted around an hour while Rio Olympic silver medallist Sindhu edged past Thailand's Busanan Ongbamrungphan 21-23, 21-13, 21-18 in another match.

It was the end of roads for the men's doubles pair of Manu Attri and B. Sumeeth Reddy as they lost their match to Chen Hung Ling and Wang Chi-Lin of Chinese Taipei 9-21, 10-21 to crash out.

Japan is subtly clipping China’s wings, without making any noise

Japanese PM Fumio Kishida’s moves are not so aggressive or effective to disturb the balance of power with China as it has come to be obtained, but just enough to trouble China

US, Japan reiterate importance of maintaining peace across Taiwan Strait

During the meeting at the White House, Kishida informed Biden that Japan has changed its security strategy significantly and detailed the reforms, which include significant defence budget increases and planning counterstrikes