Asian Games 2018, LIVE Updates, Day 9: Catch the LIVE score and updates from the Asian Games taking in the Indonesian cities of Jakarta and Palembang.

INDIA WIN! They beat Japan 3-1 in the quarter-final of the men's team event and are assured of first ever Asian Games medal. Sathiyan wrapped it up with a 3-1 win over world No 19 Kenta Matsudaira. This is huge for Indian table tennis.

He bags it with his best throw of 88.06m (national record) and gives India its 8th gold.

The Indian runs a brilliant race to finish second in men's 400m hurdles final with a personal best timing of 48.96. Qatar's Abderrehman Samba takes the gold.

And that’s the end of the match. India have won 5-0 with a late flourish from the Thai forwards who almost got a goal. But the Indian GK Rajani brought off a fine save.

PV Sindhu through to the final!

PV Sindhu sends a ferocious smash down the line which Yamaguchi fails to get to and Sindhu wins the match 21-17, 15-21, 21-10 and reach her first Asian Games final! Sindhu, the World No 3, will take on Chinese Taipei's Tai Tzu-ying in the final.

Manav Thakkar notches a comprehensive 11-5, 11-4, 11-4 win against Tin Ian Mak to win the third match in India's group clash against Macau. With his win, India take the tie 3-0.

India will take on Vietnam in their final tie in Group D with the winner of the tie progressing to the quarter-finals behind group toppers Chinese Taipei. Both India and Vietnam have played three matches, winning two and losing one.

Saina Nehwal bows out in the semi-finals after a straight-games loss to World No 1 Tai Tzu-ying. The Chinese Taipei shuttler wins 21-17, 21-14 and will face the winner of the second semi-final between PV Sindhu and Akane Yamaguchi. Saina Nehwal comes back from Indonesia with her first-ever Asian Games medal!

In the men's table tennis team event, India have taken a 1-0 lead against Macau. Anthony Amalraj beats Chung Wang 11-7, 11-3, 11-4 to give India a 1-0 lead ahead of Harmeet Desai's match against Zikang Xiao.

That brings us to the end of today's coverage. Once again India won medals in athletics but the star of the day was undoubtedly Neeraj Chopra, who is now the first athlete after Milkha Singh to win a medal in Commonwealth Games and Asian Games in the same year.

For now though, it's time to say Ta-ta.

INDIA WIN! They beat Japan 3-1 in the quarter-final of the men's team event and are assured of first ever Asian Games medal. Sathiyan wrapped it up with a 3-1 win over world No 19 Kenta Matsudaira. This is huge for Indian table tennis.

India are now one win away from being assured of a medal...

Sathiyan Gnanasekaran has won the first game of the fourth match (against Kenta Matsudaira) 12-11.

A convincing victory for Dheeraj, who defeats Kyrgyzstan's Kobashev 3-0 and proceeds to of men's light welter (64 kg) quarter-final. 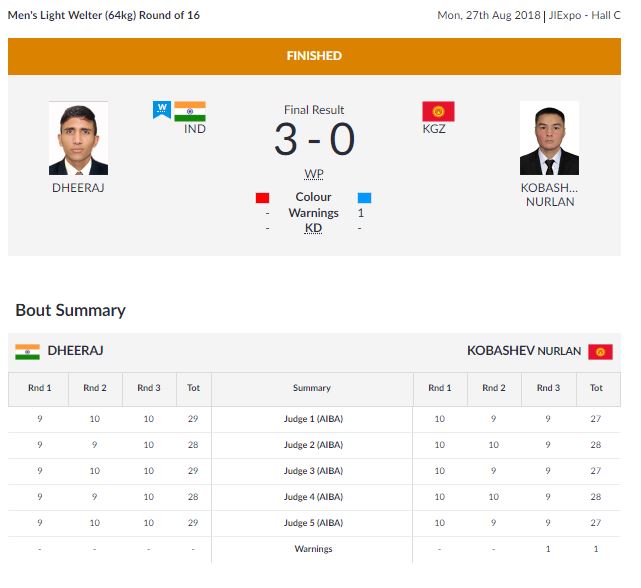 Anas and Hima claimed the silver medals in the men's and women's 400 metres races respectively.

Reigning Asian champion Anas completed the race in 45.69 seconds to be second, while Hima clocked a national record mark of 50.79 seconds to take the second place in the women's race.

The other two Indian competitors in the races, Rajiv Arokia and Nirmala finished fourth. While Rajiv timed 45.84 seconds to complete the men's 400m race, Nirmala finished the race in 52.96 seconds.

The men's title went to Qatar's Abdalelah Hassan, who completed the race in 44.89 seconds as he fended off Anas, who has a personal best of 45.31 seconds. Anas' personal best mark had given him a fourth-place finish in the 2018 Commonwealth Games.

Ali Khamis of Bahrain picked the bronze medal with a timing of 45.70 as he finished ahead of 2014 edition bronze medallist Rajiv.

Also, India's mixed team and men's bridge teams got a bronze medal each after losing their semi-final matches.

On Monday, India will look to add more medals to their tally with Neeraj Chopra in action in the Javelin throw event. We will also see star shuttlers Saina Nehwal and PV Sindhu play in their respective women's singles semi-finals while Indian women's hockey team will fight against Thailand.

Union Budget 2023-24: Why this year's Budget needs to be seen through the lenses of India as a rising power

Budgets are always instruments, not only for assessing expenditure and income, but also for projecting what kind of nation a country wishes to be seen as