Asian Games, Day 11 LIVE Updates: As another action-packed day begins, here are all the live updates from the Asiad, taking place in the Indonesian cities of Jakarta and Palembang.

That brings us to end of Day 11 of the Asian Games. Fruitful day for India as it bagged two gold medals, one silver and a bronze. India take their tally to 54 medals and stay in 8th position with 11 gold medals to their name. Here is the full medal tally

India's Arpinder Singh wins gold medal in Men's Triple Jump with a jump of 16.77. What a champions!

India's Dheeraj loses to Mongolia's Chinzorig Baatarsukh by an unanimous 5-0 margin. No medal for the India

What a fantastic sprint from Dutee Chand who win silver medal in Women's 200m with a timing of 23.20. Bahrain's Edidong Odiong takes gold

Another TT medal is coming home for India

Sharath-Manika have beaten An Js Cha Hs and An Ji Song 3-2 in Mixed doubles quarters and are assured of a medal. Their second in the Games.

India’s Sarjubala Devi has lost her quarter-final encounter in the 51kg weightclass to China’s Chang Yuan with a unanimous 5-0 decision.

The Chinese boxer seemed to grow in confidence by the end of the third period. Sarjubala landed a few decisive punches at the end of that third round. But that was not enough.

Sarjubala has the upper-hand

The second period has descended into a cat-and-mouse game. Chang Yuan has shown reluctance to attack and after chasing her around the ring, Sarjubala started to stay still on her feet by the end, inviting the Chinese boxer to attack her. Whenever the Chinese boxer tried to do that, she paid the price. The highlight of that second period was a right hook Sarjubala landed square on Chang’s nose.

Sarjubala Devi was the more aggressive boxer in that first period. The Indian kept her opponent — China’s Chang Yuan — confined to the ropes.

Vikas Krishan has won his 75kg quarter-final against China’s Tuoheta Erbieke Tanglatihan by a 3-2 split decision!
Knowing fully well that he needed a big round, Vikas came out all guns blazing. He landed a few solid punches too. But the Chinese boxer used his reach pretty well to keep Vikas confined on the ropes for long patches of the third period.

Tuoheta Erbieke Tanglatihan has been dominant in the second period. The Chinese has taken advantage of the wound next to Vikas’s eye to go of the offensive. The Indian had started as the favourite.

Cagey start to this first period. Both boxers — India’s Vikas Krishan and China’s Tuoheta Erbieke Tanglatihan — have seemed reluctant to make the first move. But a left hook from Vikas found its mark. As the time ticked, the Chinese pugilist started freeing his hands, but Vikas has his guard up and no punches have got past his defence so far. But the real worry was a cut which opened up near Vikas’ left eye. He said he was okay to fight, but was circumspect after the injury.

India assured a medal in boxing

Amit Panghal won that contest 5:0 on points. Don’t think that result can be disputed!
North Korea’s Kim Jyeong Ryeong barely had a significant punch in the third period!
Panghal came out fighting in the third period, working away at the face of the North Korean with his right jab until Ryeong cracked and tried to land a punch of his own. In those moments, the Indian used his left hooks to leave his opponent rattled!

Sharath Kamal and Manika Batra enter Round of 16

11 MINUTES! That’s all it has taken Sharath Kamal and Manika Batra to storm into the Round of 16 in the mixed doubles table tennis event after they beat Javen Choong and Karen Lyne Dick of Malaysia 11-2, 11-5, 11-8.

India’s pair of Sonia and Simran had scored 527 in their three-minute routine. This score was good enough for them to be placed seventh in the ‘ganda’ event.

​Swapna Barman has the lead in the women’s heptathlon after the javelin throw, while Purnima Hembram drops out of bronze-medal position after Japan’s Yuki Yamasaki pips the Indian’s 45.48m effort with 46.48m in her final attempt.

The 800m race will take place later in the day.

Personal best for Purnima too

Purnima scores a personal best at 45.48 with her second record. That also means that Purnima is back up to third in the overall standings of women's heptathlon event.

What an incredible first throw of 50.63m – a personal best – from Swapna Barman. This puts her into the gold-medal position currently in the women’s heptathlon.

The Indian team of Simran and Sonia — both just 20 years of age — 527 points for their three-minute routine. There are seven teams in contention for the gold medal.
The duo had won a bronze medal at the 2017 Asian Championships in Chungju, Republic of Korea.

The Indonesian duo, which came after India, have scored 574.

In the women’s event, Khushbir Kaur has heartbreakingly finished fourth while compatriot Soumya Baby has been disqualified.

That brings us to end of Day 11 of the Asian Games. Fruitful day for India as it bagged two gold medals, one silver and a bronze. India take their tally to 54 medals and stay in 8th position with 11 gold medals to their name. Here is the full medal tally 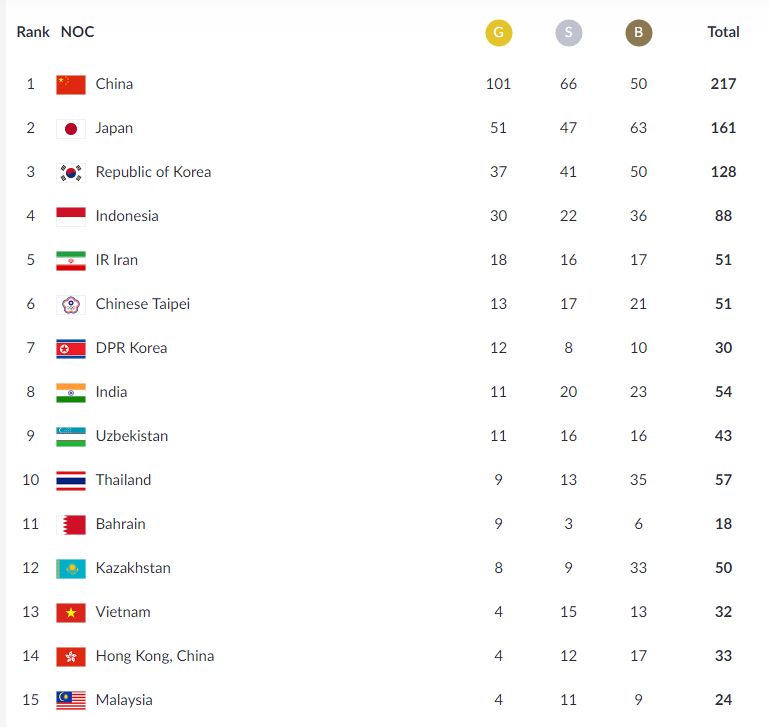 This is getting tense now. China has pulled off their GK. India needs to push aerial balls as China is without a keeper. Seconds ticking away now. India lead 1-0.

GOAL! Gurjit flick flies in. India lead 1-0 after scoring off the 3rd consecutive PC. China takes the referral. But the goal stays.

Two consecutive shots flying past the Chinese goal. India still playing too much individual trying for personal glory. Reena Khokhar trying to dribble past the Chinese defence. Momentum with India but they need to score from the opportunities. Nine minutes left in the match. It’s 0-0.

4th PC for India and the deflection goes wide. Intensity up for India as they push to get the opening goal. Reena Khokhar goes for a reverse as the shot flies wide. And that is the end of the 3rd Q. Both teams locked goalless.

Play happening at both ends as India earns their 3rd PC. But Gurjit’s flick sails wide. Pressure on both ends as teams want that elusive first goal. Under 4 minutes left in the 3rd quarter and it’s still goalless.

PC 2 for India at the start of the 3rd quarter. Umpire gives a stroke but China’s referral is correct as the ball hit defender on the stick. India trying to pick momentum here playing more from the flanks. It’s still goalless.

Day 10 Report: A jobless Manjit Singh came from nowhere to snatch the men's 800m gold for the biggest medal of his life but finals continued to be a riddle for P V Sindhu, taking some sheen off her historic silver at the 18th Asian Games on Tuesday.

Unexpected haul of a silver and a bronze in Kurash, an indigenous central asian form of wrestling, added to the tally, along with a silver in the debut event of mixed 4x400m relay in athletics.

With Tuesday's performance, India rose a rung to eighth in the overall standings with a total of 50 medals, nine of them gold, 19 silver and 22 bronze medals. The country is now just seven short of matching the 2014 tally.

The 31-year-old Manjit, an unheralded runner from Haryana who doesn't even have a national gold to his credit, chose the Asian Games to find the limelight.

In fact, he snatched it from the seasoned Jinson Johnson with a personal best of 1:46.15sec. Johnson finished second for a silver, a rare 1-2 for India at the Games.

"I saw videos of my races at national and international events and analysed the mistakes. I was motivated to improve myself. I never thought of bettering the national mark. I just wanted to give my best. I don't have a job but my coach is from Army," said the athlete, who lives in Jind, Haryana, and comes from a family of farmers.

The quartet of Muhammed Anas, M R Poovamma, Hima Das and Arokia Rajiv clocked 3:15.71 seconds, while Bahrain ran away with the gold in 3:11.89.

In the morning competitions, compound archers picked up silver medals in both the men's and women's team events, going down to South Korea in both the finals.

It wasn't a particularly disappointing or unexpected result but the fact that the men could not defend their gold from the 2014 edition would rankle.

Then came Sindhu and her final jinx, compounded by her inability to find an answer to world No.1 Tai Tzu-Ying's deceptive game that has left most bamboozled.

For the sixth successive time, the Indian was no match for the Taipei player despite her claims of having a strategy in place for her.

"If I had played patiently and kept the shuttle in, it could have been different. It was not easy to take points from her because her defence was also good," she said after collecting India's first ever singles silver in the Asian Games competition.

The surprise package of the day title went to Kurash, a form of wrestling indigenous to central asia in which the aim is to throw the rival off his/her feet by using a towel to hod them in place.

India collected medals through Pincky Balhara (silver) and Malaprabha Yallappa Jadhav (bronze) in the women's 52kg category. The two teenagers didn't even have enough money to buy their kits and got them only after the intervention of the sports ministry.

"People in my village pooled in Rs 1.75 lakh to send me to training camp. They all have supported me a lot. I am forever indebted to them," a teary-eyed Balhara told PTI.

In Table Tennis, India signed off with its maiden Games medal, losing in the semifinals to Korea to settle for a bronze.

India continued its march ahead with another fairly comfortable wins in the squash team event.

Barring Harinder Pal Sandhu, who lost to Al Tamini Abdulla in the men's tie against Qatar, no other Indian faced any problem as both the men and the women inched ahead in their pursuit to qualify from the group stage.

There was no stopping the hockey juggernaut with defending champion Indian men's team making a mockery of Sri Lanka, pumping in 20 goals to remain unbeaten in the pool stages

It has been a scintillating performance from the Indians in the pool stage as they have scored as many as 76 goals and conceded just three.

However, the boxers endured a winless day with both Pavitra (60kg) and Sonia Lather (57kg) losing in the quarterfinal stage to bow out of women's competition.

Also on Tuesday, the Indian men's volleyball team lost 1-3 to Pakistan in a 7-12 classification match.

India@75: India is the mother of democracy, has proved its ability, says Narendra Modi from Red Fort

India@75: Need to be inspired by the 'sankalp' and determination of our freedom fighters who dreamt of a free India, Prime Minister Narendra Modi tells India from Red Fort

If Ukrainian forces were behind the explosions, that would represent a significant escalation in the war. Such attacks could also indicate that Ukrainian operatives are able to penetrate deeply into Russian-occupied territory

Salman Rushdie, Vijayanagara visions and inevitability of a ghar wapsi

I hope Salman Rushdie recovers and finds a deeper voice and soul than before to pick up the gifts Goddess Saraswati has given him, whether he ‘believes’ in Goddesses or not