Extraordinary from Manjit considering, he was a distant fourth for most of the race. He ran like a champion in the final 100 metres and grabs the gold. This is India's ninth gold medal at the Asian Games.

Akashdeep gets onto the scoring sheet, thanks to a drive from Chinglensana that rebounded off the GK and Akash was right on the spot to tap it in. India leads 3-0. PC 4 for India. Rupinder’s flick saved by Lankan GK and then Akashdeep with a flick off a pass from Lalit brings up the 4th goal.

The Indians are showing just why they are the top-ranked team at the Asian Games. With the first quarter still some way away from ending, the Indian’s have raced into a 3-0 lead.

A simple drag-flick from Harmanpreet Singh sneaks into the right-hand corner of the goal. Just over five minutes have elapsed into this match.

In what was a scrappy contest, the home girl just edged past India’s Pavitra to enter the semi-final. Pavitra dominated the first round while the second — Indonesia’s Hasanah Huswatun repeatedly tried to goad the Indian by holding her arms aloft and urging the Indian to take a shot at her — where  was a close contest. The Indonesian just raced ahead by the third period to snatch the contest and a spot in the final.

Tai Tzu-ying's deceptive play has caught Sindhu on the wrong foot more than once.

Indian men's compound archery team wins silver, losing to South Korea in a shootoff. The men’s team led for much of the final but after four ends, the score was level at 229.

In the shootoff too, the scores were level. But the Koreans had more arrows in the centre circle.

With the Indian and South Korean team both shooting 229 after four ends, this final has gone into a shootoff!

The Indian started strong, winning the first game, but was unable to hold off the Korean, who grew into the match over time.

The Indian archery team of Madhumita Kumari, Muskan Kirar and Jyothi Surekha Vennam have won the silver medal in the women’s compound archery team event after losing 228-231 to South Korea in the final.

India's Swapna Barman is currently in the lead in the women's heptathlon event with 1003 points as the high jump event concludes. There are still the shot put, 200m, long jump, javelin throw and 800m events left. The other Indian in the fray, Purnima Hembram, is fifth with 891 points.

India’s Dutee Chand strode into the women’s 200m semi-finals after topping her heat with a time of 23.37 secs. Her compatriot Hima Das is also through with a time of 23.47, despite her finishing fourth in her heat.

So that's all we have for the day. Another gold medal day for India as Manjit Singh finished first in the men's 800m. In the same event, Jinson Johnson also clinched the silver so it's a one-two finish for India in the same event.

Apart from the above, PV Sindhu lose her badminton singles final event so she won the silver. In the compound archery team events, both men and women lost in the final so that's two silver medals for India.

There was also a silver medal for India in the mixed team 400m relay final.

In a surprising turn, India's Pincky Balhara won the silver medal in Kurash. Also a historic bronze medal in table tennis with the men's team losing in the semi-final against Korea.

So overall a good day for India.

We will see you again tomorrow, bringing you all the updates from Day 11. See you and good bye.

The men's synchronised 3m springboard diving event has come to an end. 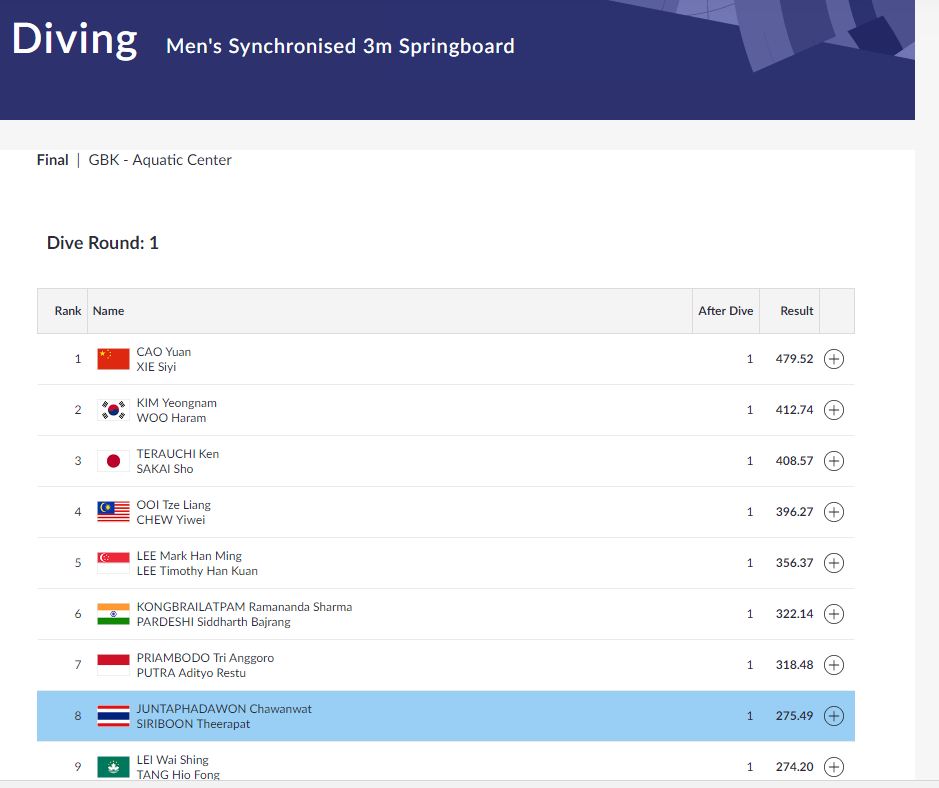 There was a time, when the 800m was seen as an Indian domain.
In five Asian Games between 1966 and 1982, Indian runners won the gold medal in 800 metres four times, and had a silver on the only occasion they did not win.
Ranjit Singh won the gold at first Asian Games in 1951
India’s amazing run in 800m started with BS Barua emerging champion in 1966 and then Sriram Singh was second in 1970. Sriram went on to win gold in 1974 and 1978 and Charles Borromeo kept up the tradition by winning gold in New Delhi in 1982.
The last Indian to win a medal in 800m was a silver from Binu Matthews in 2002 in Busan.
Ranjit Singh and Kulwant Singh gave India their first one-two in 800m in 1951 and now Manjit and Jinson become only the second Indian duo to do so.

India on a Roll!

Fabulous show of talent by our 4x400 Mixed Relay Team of #TOPSAthletes @HimaDas8, @muhammedanasyah, Arokia Rajiv & MR Poovamma. They bagged a 🥈clocking in an impeccable 3:15.71. Keep up the good work Champions! 🎉🇮🇳👊🏻#KheloIndia #AsianGames2018

Bahrain take the gold comfortably. So yet another good performance by the Indians in track and field.

Right then, another chance for India to add to their their medals tally.

So after the 200m race, Swapna Barman remains in the second place with 3481 points in the women's heptathlon.

Purnima Hembram is at third spot. 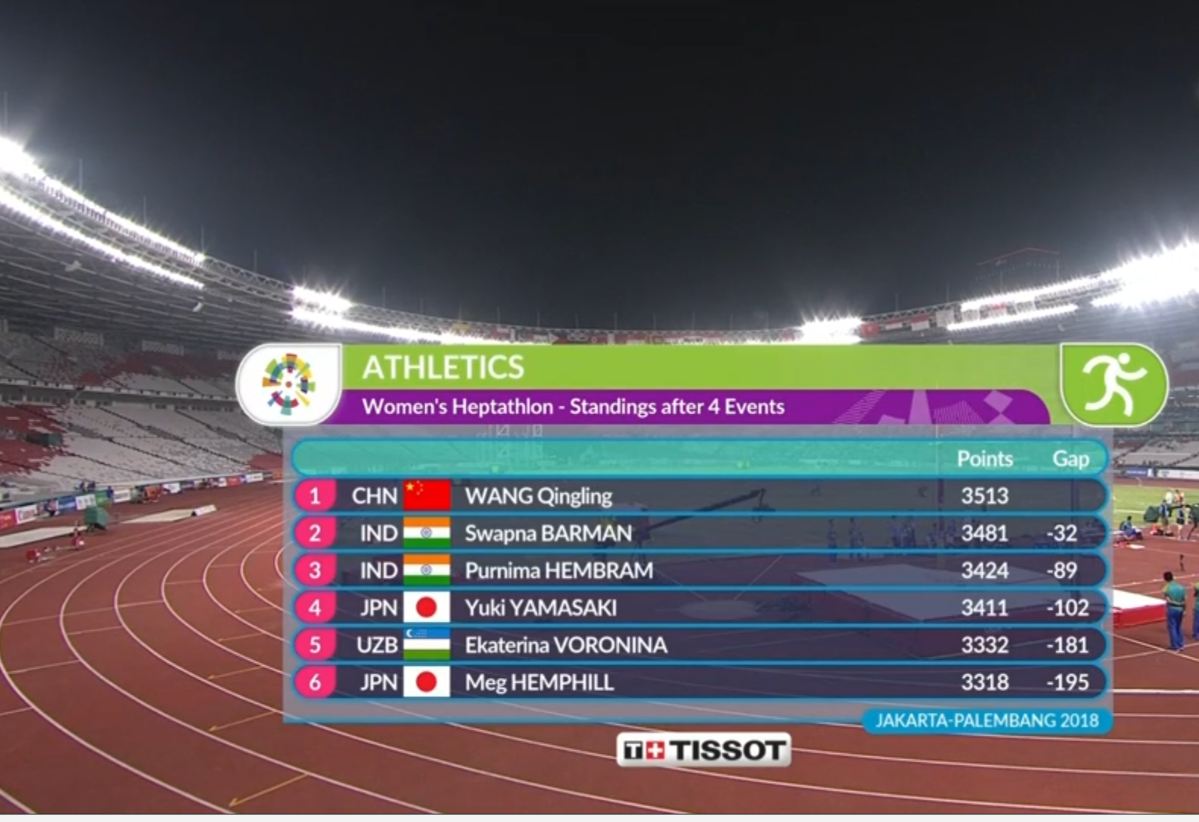 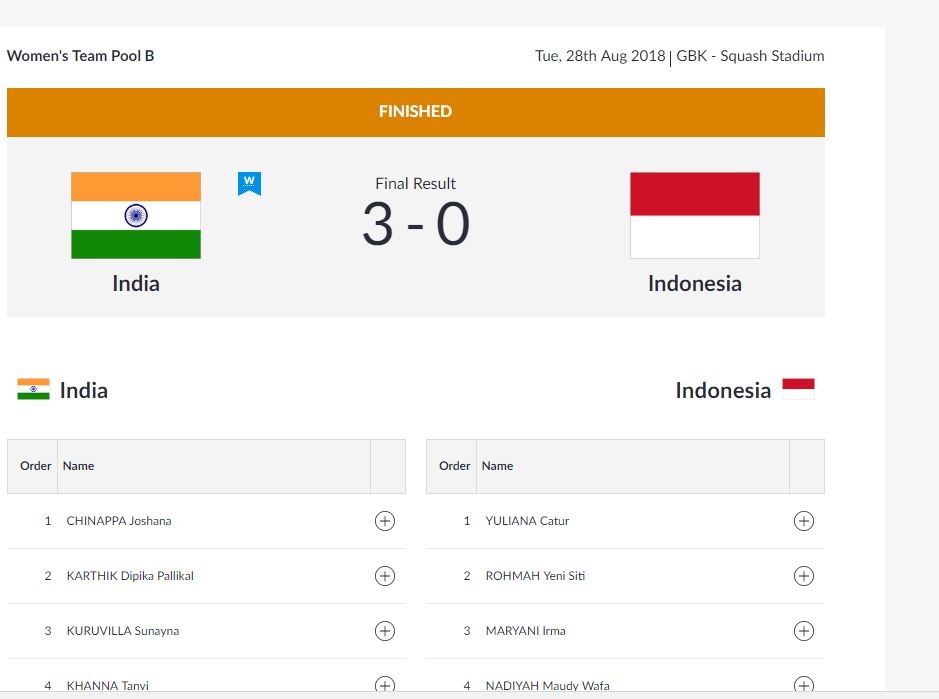 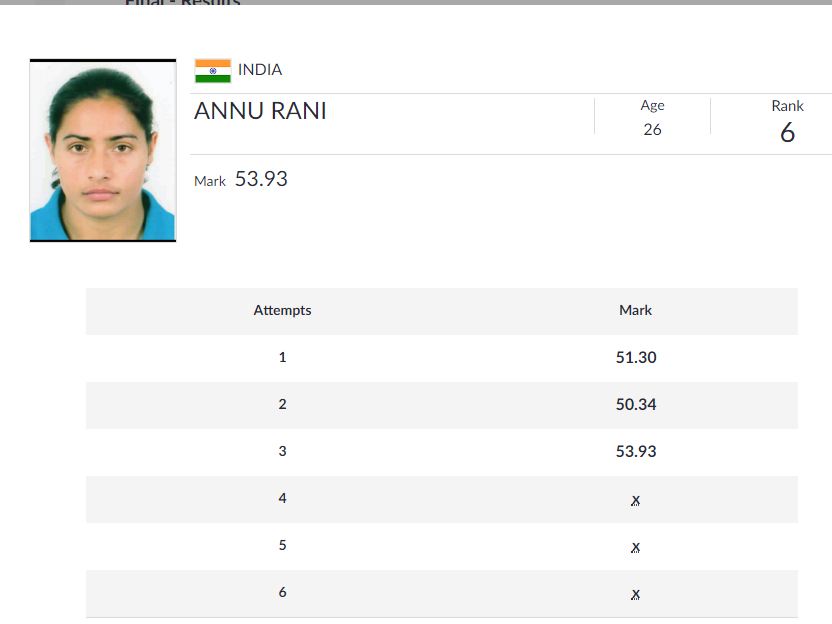 Asian Games 2018, Day 10 latest update: The Indians are showing just why they are the top-ranked team at the Asian Games. With the first quarter still some way away from ending, the Indian’s have raced into a 3-0 lead

After the third day of athletics competition, India has won two gold and six silver from the blue-riband discipline.

The 20-year-old Chopra, a farmer's son from a village near Panipat in Haryana, shattered his own national record by clearing a distance of 88.06m in his third attempt to seal the gold.

This was the second track and field gold in the ongoing Asian Games after Tejinderpal Singh Toor's Games record shattering performance in the men's shot put on the first day of competitions on Saturday.

Chopra's gold is India's only second medal in javelin throw in Asian Games history after Gurtej Singh won a bronze in 1982 in New Delhi.

Liu Qizhen of China was a distance second with a best throw of 82.22m while Pakistan's Arshad Nadeem won the bronze with a 80.75 effort.

The Commonwealth Games and reigning Asian champion completely dominated the competition as he bettered his own national record of 87.43 which he had come up with in Doha during the first leg of the Diamond League series in May. None of the competitors in the field had a 85-plus throw this season.

Chopra's biggest rival was expected to be Chao Tsun Cheng, who last year recorded a throw of 91.36m but the Chinese Taipei thrower could manage a best of 79.81 to finish fifth.

Chopra, the world junior record holder of 86.48, has been in tremendous form this season as has consistently crossed the 85m mark.

He won the Federation Cup in March with 85.94m, clinched a gold in the Gold Coast Commonwealth Games with a throw of 86.47m, before the 87.43 effort in Doha. Before coming here, he had 85.17 and 85.69 in France and Finland during his preparations for the Asian Games.

Although, he won the gold quite easily, Chopra said the competition was tough.

"It was not easy. Good throwers had come but they could not perform well. I had prepared well and wanted to create an Asian Games record but the height of javelin was an issue and that is why I could not get the desired distance," Chopra said.

The Asian Games record is 89.15m, which Zhao Qinggang of China had set in 2014 in Incheon.

"But it was still is a national record, so I am happy. I will try to better it further," said Chopra.

Talking about his national record-breaking throw, Chopra said, "All things need to come together for a successful throw. Only when technique and speed is perfect, you get it and it happened it in the third attempt."

He said he did not have any particular target in mind, coming into the Asian Games.

"I don't take pressure by setting targets. I had a gold in World Junior Championships, Asian Championship and at the CWG, but this is my biggest medal so far. The World Championship gold was at junior level, so this is big," he said.

Chopra said the recent death of his former coach Gary Calvert shook him.

"He (Calvert) had told me we will meet at the Asian Games. I was in Finland when I got the news of his death. What can one do, it's God's will. We can't interfere," he said.

Chopra will next compete in Diamond League Final in Zurich on 30 August.

Meanwhile, Neena, a daughter of a daily labourer in Kerala, won her first Asian Games medal in long jump with a season-best effort of 6.51m. She finished behind Thi Thu Thao Bui of Vitenam who cleared 6.55m.

"She (Bui) has always been a tough competitor. She has beaten me a couple of times before but I am happy with this medal," Neena, who lives in Kozhikode, said.

Ayyasamy also shattered his own national record while winning a silver in men's 400m hurdles. He clocked 48.96 seconds to finish behind Qatar's Abderrahman Samba who won the gold with a Games record time of 47.66.

Ayyasamy's earlier national record was 49.45 which he had come up with during the Federation Cup in March.

The 21-year-old from Tamil Nadu was fourth till the 300m mark but passed two competitors in the last 100m stretch to cross the finishing line in 48.96, his personal best mark.

It was India's first medal in the event since Joseph Abraham won a gold in 2010.

She had won a gold in this event in the 2010 Asian Games in Guangzhou.

In the men's 800m, Jinson Johnson and Manjit Singh qualified for the final.

National record holder Johnson topped heat number one by clocking 1:47.39 while Singh was second in heat number three with a timing of 1:48.87.

However, there were disappointing performances by other athletes.