Catch the live updates from Day 7 of the Asian Games taking place in the Indonesian cities of Jakarta and Palembang.

Tajinderpal Singh Toor wins gold in Men's Shot Put event with a throw of 20.75 which is a new Asian Games record. What a performance. What a Champions

Dutee Chand qualifies for Women's 100m semi-final with a timing of 11.38

Sarita's final throw has been called a foul and that means she has failed to win a medal in Women's Hammer Throw Final. She finishes fifth in the final charts

Disappointment for Saurav Ghosal who loses the semi-final 2-3 against China's Chun Ming Au despite leading 2-0. He will have to settle for bronze in Men's Singles Squash

Great news coming in from the squash court as India's Dipika Pallikal Karthik has ensured India win a bronze medal. She lost her semi-final to Nicol David, but with both semi-finalists assured a bronze, she's taken India's medal tally to 26.

India's PV Sindhu is in the quarters after defeating Mariska Tunjung Gregoria 21-12, 21-15. The match lasted just 34 minutes. She joins compatriot Saina Nehwal in the Last-8.

The men's doubles pair of Satwiksairaj Rankireddy-Chirag Shetty have crashed out from the men's doubles event after a 17-21, 21-19, 17-21 defeat against Choi S and Kang M.

In 31 minutes, Saina Nehwal breezes into the quarters of the women's singles event with a 21-6, 21-15 win over Indonesia's Fitriani Fitriani.

Tajinderpal Singh Toor won India’s ninth Asian Games gold in shot put. He also ensured India did not go without a gold medal as he won India’s seventh gold of the 18th Asian Games on the seventh day of the quadrennial Games. Leading almost from the first round, Tajinderpal, who won a silver at Asian Championships last year in Bhubaneshwar, had a best of 20.75m, which was also the Games record.

Right from his first throw, which came close to 20m at 19.96m, Tajinder led the field. He followed with 19.15m and then a foul. On his last three throws, he touched 19.96m once again before finally breaching the 20m mark with 20.75m and then exactly 20 metres.
China’s Liu Yang came second with a best throw of 19.52 on his third attempt and Ivan Ivanov of Kazakhstan finished in third with a best of 19.40.

Tajinder seemed to realize his chance when Saudi Arabia’s Sultan Abdul Majeed Alhebshi, the gold medallist at last three Games and Asian Record holder, failed to register a legal throw in his first three attempts and crashed out.

That's all for today. Tajinderpal Singh lights up India's day with a late gold in Men's Shot Put final. Ear;ier in the day, squash trio of Joshna Chinappa, Dipika Pallikal and Saurav Ghosal added thre bronze medals to India's kitty after they lost in their respective semi-final clashes.

Hima Das broke national record in the Women's 400m qualifiers and will play in the final tomorrow.

So we will be back again tomorrow with all updates from an action-packed day at Jakarta. Good night 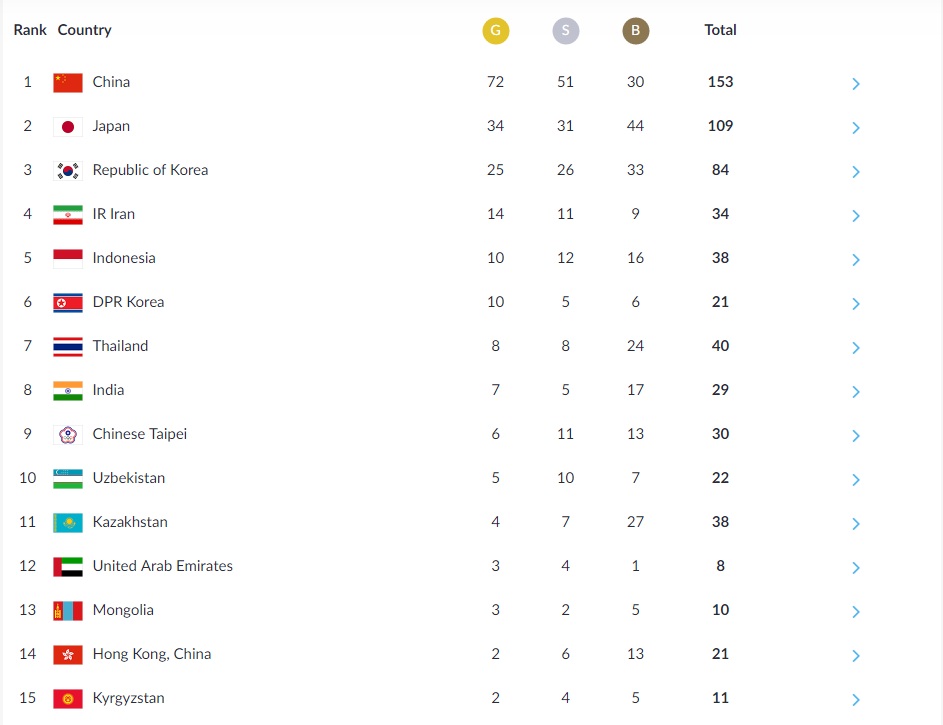 And that’s it. India sits on top of Pool B with nine points. They have beaten South Korea 4-1. A powerful 4th quarter with errors minimised has given India a memorable victory. They now have one match remaining against Thailand. Against a tiring Korea, India used the midfield well and Gurjit finally flicked to her potential with two goals in the 4th quarter.

India squander their leads after the first and third set to lose 3-2 to Chinese Taipei. The Indians remain rooted at the bottom of the their Pool B table, with four losses in four matches. 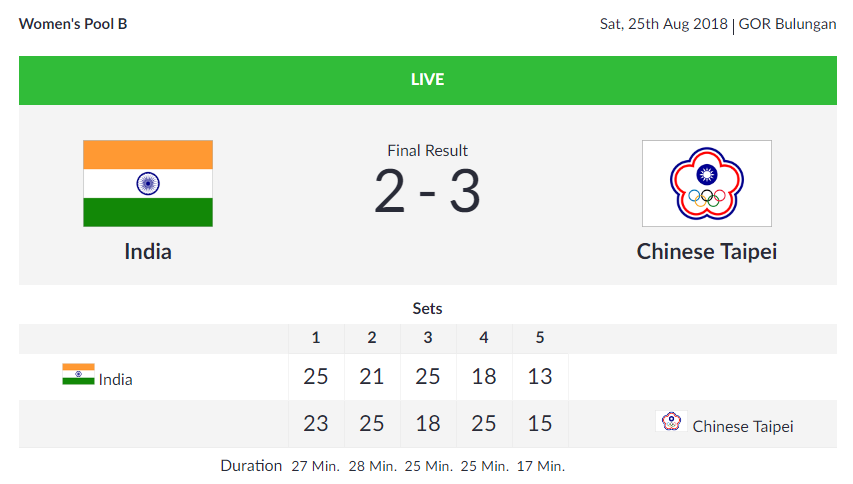 It’s 4-1. Three goals in three minutes and the Koreans have been outclassed. Lovely pick and move by Vandana, cutting towards the right and shooting past the goalkeeper. India leads 4-1 with four minutes left.

Muhammad Anas qualifies for the final of the Men's 400m final with a fabulous run to win the semi-final with a timing of 45.30

Gurjit scores her second consecutive goal with a clean flick high into the net. Neat and powerful flicks have given India a 3-1 lead. Less than 5 minutes left.

And they have scored. Gurjit flicks it high and it settles into the net. India leads 2-1. But Korea wants a referral. The goal stands. India is up 2-1.

India's Arokia Raviv qualifies for the final of Men's 400m after finishing second in the semi-final with a timing of 46.08 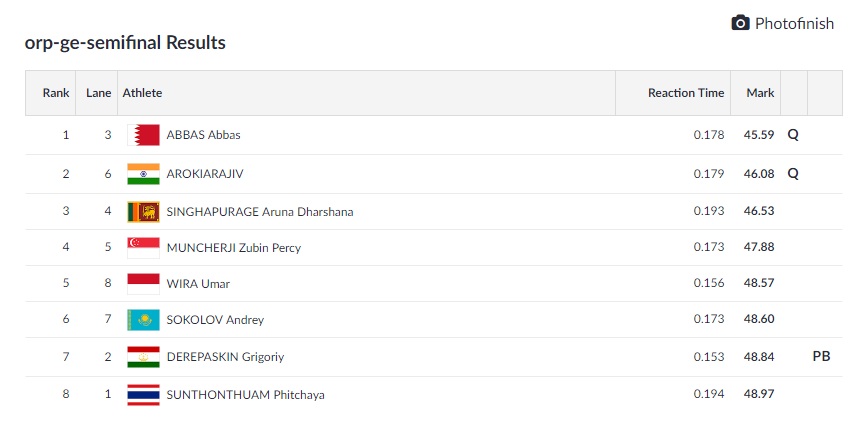 Tajinderpal Singh Toor wins gold in Men's Shot Put event with a throw of 20.75 which is a new Asian Games record. What a performance. What a Champions

A best-ever haul in rowing, underlined by a gold medal, a title-winning performance in men's doubles tennis and yet another historic defeat in kabaddi were the highlights of the Indian campaign at the 18th Asian Games on Friday.

Apart from this, the shooting ranges yielded yet another medal for India with Heena Sidhu taking bronze in women's 10m air rifle. The squash singles stars made it to the semi-finals, ensuring three medals. This will be the first time ever that Indians will climb the podium in the squash competition.

India clinched a total of seven medals on the day, taking the eighth spot with a tally of six gold, five silver and 14 bronze. China leads the list with 66 gold, 46 silver and 27 bronze medals.

This edition of the Asiad has showcased the considerable progress Indian rowers have made at the international level.

The Indian quadruple sculls team clocked a time of 6 minutes and 17.13 seconds while hosts Indonesia clocked 6:20.58 to take the silver. Thailand had to be content with the bronze at 6:22.41.

This is only the second gold for India since they started participating in the rowing events at the Asiad. The first was won by Bajrang Lal Takhar in men's singles sculls at the 2010 Games.

Dushyant started India's campaign on the sixth day of the Asian Games on a positive note by bagging the bronze medal in the men's lightweight single sculls final. The 25-year-old, who had also clinched a bronze at the 2014 Asiad, clocked a time of 7 minutes and 18.76 seconds to finish the competition at the third place.

Tennis stars Rohan Bopanna and Divij Sharan then added to the cheer in the Indian camp when they defeated Denis Yevseyev and Aleksandr Bublik of Kazakhstan 6-3, 6-4 in the men's doubles final.

This is the fifth time that India have won gold in men's doubles at the Asian Games. This is also the maiden Asian Games title for top seeds Rohan and Divij.

In the singles category, Prajnesh Gunneswaran had to settle for a bronze medal after being outplayed by Uzbek top seed Denis Istomin 2-6, 2-6 in the semi-finals.

In the shooting range, India continued its good show. Heena earned her first individual medal in the Asian Games as she got a bronze medal in the women's 10m air pistol event.

Heena scored 219.2 in the final. Qian Wang of China won gold with a Games record score of 240.3, while South Korea's Kim Minjung took the silver with a score of 237.6.

Manu Bhaker, the other Indian to reach the final, finished at the fifth position with a score of 176.2.

In squash, Saurav Ghosal, Dipika Pallikal Karthik and Joshna Chinappa registered convincing victories to assure India of a medal each as they entered the semi-finals.

But the celebratory mood of Indian fans was dampened when the Indian women's kabaddi team suffered a historic loss to Iran in a hard-fought final which saw the defending champions lose their crown after an eight-year reign.

The defending champions lost 24-27 in a nail-biting encounter as Iran celebrated its first-ever gold medal at the Asiad.

For India, this was a devastating blow, especially after their men's team was outplayed by Iran in Thursday's semi-finals. This is the first time that India have failed to win gold in a major championship.

Later on Friday, Iran made a grand double as its men's team got a 26-16 win over South Korea in the final. This is the first time the Asiad saw a team other than India win the gold medal.

The boxing competitions, which started on Friday, saw the Indian campaign get off to a mixed start. Gaurav Solanki was eliminated in the very first round of the men's flyweight (52kg) division when he was outpunched 5-0 by Japan's Tanaka Ryomei.

Seasoned boxer Manoj Kumar brought the smiles back to the Indian fans with a 5-0 thrashing of Bhutan's Sangay Wangdi in a Round-of-32 clash in the men's welterweight (69kg) category.

Meanwhile in badminton, women's doubles pair of Ashwini Ponnappa and N Sikki Reddy advanced to the Round-of-16, while men's singles shuttlers Kidambi Srikanth and HS Prannoy perished in the quarter-finals.

Defeat was also experienced in archery, with the compound mixed archery team of Jyothi Surekha Vennam and Abhishek Verma losing 153-155 to Iran in the quarter-finals.

In hockey action, reigning champions India continued their winning streak with an 8-0 victory against Japan in their third Pool A match. India have taken their total goals scored in the tournament to a record 51 after winning 17-0 against Indonesia followed by 26-0 against Hong-Kong China in their first two matches.