That brings us to the end of India's Asian Games campaign, the most successful one till date in terms of medals won, and joint best in terms of gold medals won. India end the Games with a total of 69 medals and 15 golds and are likely to finish in the eighth spot in the medal's tally.

INDIA HAVE THE BRONZE. THEY HAVE BEATEN PAKISTAN 2-1.

Turn-over gives Pakistan their first goal. GOAL! ATIQ CUTS THE MARGIN. IT’S 2-1. This game has come to life in the fourth quarter

GOAL! Lalit gives it to Akashdeep whose flick goes high into the Pakistan goal. India lead 1-0.

India women's squash team clinch the silver medal after losing to Hong Kong 2-0 in the final.

India are currently trailing 0-1 against Hong Kong after losing the first set in the final of the women's team squash event. Should India win, they will have their best-ever gold medal haul at the Asian Games.

ANOTHER GOLD FOR INDIA

Even as boxer Amit Panghal was clinching gold in the boxing ring, 60-year-old Pranab Bardhan and 56-year-old Shibhnath Sarkar earned the country another gold in the men's bridge pair event! India have 67 medals, including 15 golds. That is the country's best-ever performance at the Asiad!

Amit Panghal has won the fight of his life, beating Olympic champion Hasanboy Dusmatov in the final of the 49kg weight class. He’s edged this bout by a split decision of 3-2. But that doesn’t matter! It’s a gold medal in the boxing ring for India.

Preferring to stay on the outside of the ring, Panghal had a more defensive third round. Uzbekistan’s Hasanboy Dusmatov is the Olympic champion, but he seemed to be rattled by what has transpired in the first two rounds.

The first two rounds have seen Amit Panghal dominating the fight. He's had the Uzbek Olympic champion Hasanboy in some trouble with his fearless boxing. That open stance of the southpaw from India has been effective.

India’s 60-year-old bridge player Pranab Bardhan and 56-year-old Shibhnath Sarkar are on top after six rounds in Final 1 of the men’s pair bridge event.  There’s still another Final left, but this is looking promising.

Having won their opener against Nepal, the Indian mixed judo team has crashed out of the Asian Games after losing to Kazakhstan in the quarter-final. For India, Vijay Yadav, Harshdeep Brar, Kalpana Devi and Garima Choudhary all lost their encounters.

Some good news coming from the judo mat!

India’s mixed team of Harshdeep Singh Brar, Vijay Kumar Yadav, Kalpana Devi, Garima Choudhary and Rajwinder Kaur have made it to the last-8 after breezing past Nepal 4-1. India now face Kazakhstan in the quarters.

With just two days of action left at the 2018 Asian Games, India are 8th in the standings with 65 medals. They have more medals than Iran (58), Chinese Taipei (60) and Uzbekistan (59), but these three teams have more gold medals which put them above India.

That's all from our coverage of Asian Games. Thank you for following Firstpost. It was a pleasure bringing you the coverage of the Games. We would like to thank our corespondents Snehal Pradhan, G Rajaraman, Sundeep Misra and V Krishnaswamy for their precious inputs from Jakarta.

That brings us to the end of India's Asian Games campaign, the most successful one till date in terms of medals won, and joint best in terms of gold medals won. India end the Games with a total of 69 medals and 15 golds and are likely to finish in the eighth spot in the medal's tally. 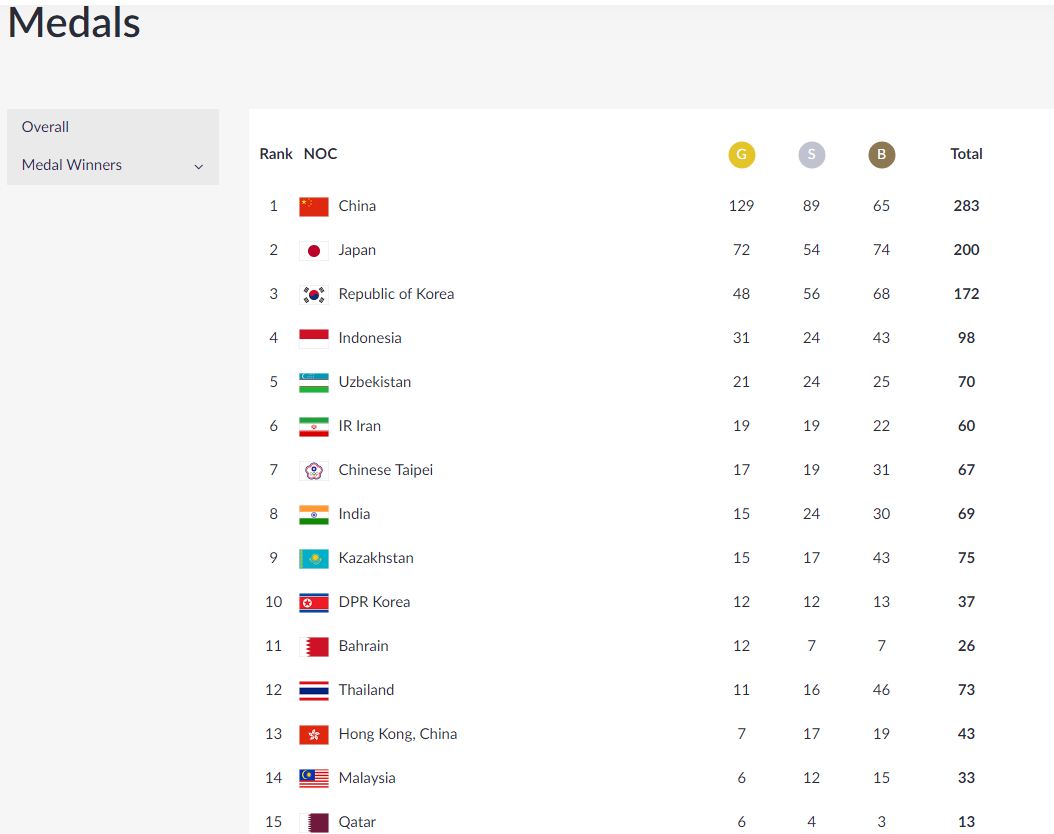 This is India's third bronze medal at Asian Games. For Pakistan this is only the fourth time they have had to settle for a silver medal

The Indian men's hockey team sees off a determined Pakistan side, winning 2-1!

INDIA HAVE THE BRONZE. THEY HAVE BEATEN PAKISTAN 2-1.

Below 3 minutes for India. Sardar hits, Chinglensana deflects it as Pakistan goalkeeper saves brilliantly. Pakistan have pulled off the GK.

India gets their 2nd PC. Akashdeep slips it onto the defenders feet. But Rupinder’s flick is wide. It’s still 2-1 for India.

Turn-over gives Pakistan their first goal. GOAL! ATIQ CUTS THE MARGIN. IT’S 2-1. This game has come to life in the fourth quarter

That’s the end of the 3rd quarter. Only 15 minutes left for Pakistan to find an equaliser or India to increase their lead. But the quarter belongs to Pakistan as they defended well and forced the Indian midfield to yield space. India will need to bring Manpreet through the middle as Pakistan is defending the runs into their flanks.

India giving away turn-overs but then converts a Pakistan attack into a counter; speedy move from India but Pakistan is defending well. Three minutes left in the 3rd quarter. India leading 1-0.

Asian Games 2018, Day 14 latest update: Amit Panghal has won the fight of his life, beating Olympic champion Hasanboy Dusmatov in the final of the 49kg weight class. He’s edged this bout by a split decision of 3-2. But that doesn’t matter! It’s a gold medal in the boxing ring for India. Preferring to stay on the outside of the ring, Panghal had a more defensive third round. Uzbekistan’s Hasanboy Dusmatov is the Olympic champion, but he seemed to be rattled by what has transpired in the first two rounds.

Day 13 report: A golden dream unfulfilled for over 30 years remained just that in women's hockey but India equalled its best ever medal haul as sailors joined the assorted contributors to the country's tally at the 18th Asian Games on Friday.

On the penultimate day of competitions, the euphoria of track-and-field gold rush was far over but the momentum was certainly retained with a silver and a couple of bronze coming in from the sailing events.

The women's hockey team, however, endured a heartbreak, albeit not as big as the men. They lost to Japan 1-2 in the final despite being favourites for gold. But it was still a step up from the bronze that came in the 2014 edition.

The men will square off against Pakistan on Saturday for a bronze.

The Indian position in the overall tally was a steady eighth with 65 medals, which is the same as 2010 – the country's best ever Asiad show. The haul includes 13 gold, 23 silver and 29 bronze medals.

The highlight of the day was the sailing performance, India's best showing.

Varsha Gautham and Sweta Shervegar claimed silver in 49er FX event while two men combined to overcome disqualification in their previous race to grab a bronze.

Thanks to their showing, the country enjoyed its best result since 1982. In 1982, India won a gold in fireball, a silver in enterprise and a bronze in wind-glider.

For Varsha, it was her second Asiad medal as she had won a bronze in 29er with Aishwarya Nedunchezhiyan in the 2014 edition.

Varsha and Sweta were not chosen by the federation to represent India and only after a court battle did they reach the Indonesian capital.

At the helm of her 49erFX, 20-year-old Varsha and her crew partner Sweta, completed the 15-race event with 40 net points to finish second behind winners from Singapore, who had just 14 net points.

Sailors are given points after each race, and the pair, which gets the least points, is declared the winner.

"These were stressful three months. But everything has paid off. There were a lot of up and down. A lot happened. At least 10 times I thought, it's not worth it, I can't handle it but somehow I continued. It was certainly not a glamorous race, there was pressure," Varsha said.

Varun Thakkar Ashok and Chengappa Ganapathy Kelapanda won bronze with a total of 53 after race 15 in the 49er men's event.

The Indian women's hockey team, however, failed to break its 36-year-old gold jinx. The loss will hurt the Indians badly as a gold here would have guaranteed a direct qualification in the 2020 Tokyo Olympics.

Minami Shimizu and Motomori Kawamura scored for Japan through penalty corners in the 11th an 44th minute while Neha Goyal's field goal in the 25th minute was the lone strike for India, who were aiming to win their first Asiad gold since 1982.

The Indians had qualified for the final of the Asian Games after a gap of 20 years gap, having beaten China in the semifinals.

The loss came after the women's team blanked the David-led Malaysia in the semifinals. The team, comprising Joshna, Dipika Pallikal Karthik and Sunayna Kuruvilla, is now assured of at least a silver.

In the boxing ring, it was day of mixed results and emotions.

Debutant Amit Panghal (49kg) continued his sensational run to make the final with a hard-fought win but an injured Vikas Krishan (75kg) had to settle for bronze after being declared medically unfit for his semifinal.

Amit was the lone Indian boxer to make the final in the ongoing edition, beating Philippines' Carlo Paalam in a 3-2 verdict.

The 22-year-old Armyman, who won a silver medal at the Commonwealth Games earlier this year, will be up against reigning Olympic champion and world championships silver-medallist Hasanboy Dusmatov of Uzbekistan in the summit clash tomorrow.

Amit's draining victory made up, to an extent, for the disappointment of Vikas being forced to withdraw from his last-four bout owing to a cut on his eyelid sustained in the pre-quarters.

The 26-year-old was to take on Kazakhstan's Amankul Abilkhan this evening.

"There is inflammation in retina as well and it is too risky to let him fight. He will have to take a break for a few weeks," an official of the contingent told PTI.

India's sensational run in the table tennis event came to an end after Sharath Kamal, G Sathiyan and Manika Batra lost in the pre-quarterfinals of the singles competition.

Sathiyan, who led India to a maiden medal in 60 years with his two wins against Japan in the team event, was not to able to do an encore against Kenta Matsudaira.

There was no respite from losses in judo and volleyball.

IPL Players Auction 2021, Sold, Unsold Players List Live Updates: Follow this space for the latest update on the 2021 IPL Player Auction that will take place in Chennai on Thursday