Asian Games 2018, Day 13 LIVE Updates: With India having won 59 medals in 12 days, Friday will represent an opportunity to go past their best-ever tally of 65 medals at an Asiad. Catch all the action from Jakarta and Palembang on our liveblog

Locked at 6-6, Matsudaira takes five points in a row to claim the fourth game 11-6. The Japanese paddler extends his lead 3-1 over Sathiyan. India's challenge in the men's singles competition in table tennis is one game away from ending.

After Sharath Kamal’s ouster earlier in the day, Sathiyan is the lone representative of the country in the men’s single event. He’s currently in action against World No 19 Kenta Matsudiara in the Round of 16.

Sathiyan holds his nerve to take the first game 11-9 against the Japanese paddler.

India have won a bronze medal in boxing today, thanks to Vikas Krishan. The medal though comes under unfortunate circumstances. According to PTI, the boxer was declared medically unfit to fight his semi-final bout due to a cut on his left eyelid sustained earlier in the event.

The Indian women’s squash team has steamrolled its way into the final! After Joshna Chinappa stunned Nicol David, the four-woman Indian team won their second tie too. Their opponents in the summit clash will be whoever wins the second semi-final between Hong Kong and Japan.

A roaring comeback from Manika to make it 1-3

Having dropped the first three games, Manika was just one game away from elimination. But she came into the fourth game with sensational form, reeling off the first seven points.

However, the Chinese paddler clawed back by winning the next three points. Manika wins the fourth game 11-6.

What a thrilling performance from Sharath Kamal

Sharath Kamal saves six game points to bag the fourth game 16-14. The scores are level now at 2-2. What a thriller!

Rajwinder misses out on medal

India’s Rajwinder Kaur loses her repechage round fight to Chinese Taipei’s Jiawen Tsai. An ippon point for her opponent.

India’s Ragina Kiro finishes sixth and last in her women’s kayak single (K1) 200m heat, which cements her place into the semi-finals. The top three from two heats enter A-final medal round.

Japan, with 174 medals, also relied heavily on their swimmers. Swimming brought Japan 52 medals, while 34 other disciplines have earned the remaining medals.

In contrast, India's medals have come only through 15 disciplines.

With 59 medals in 12 days, India are 8th in the standings. 19 of those medals have come in track and field events.

That's all we have for today. A gold in women's hockey would've been perfect but it was not meant to be. India also clinched medals in sailing while boxer Amit Panghal will fight for gold on Friday. Indian men's hockey team are also in action as they play arch-rivals Pakistan in the bronze medal match.

We will be back tomorrow with all the updates. See you then, good bye!

End of Round of 5 in Men's 3m Springboard.

Two more rounds left and he will look to improve his final ranking. 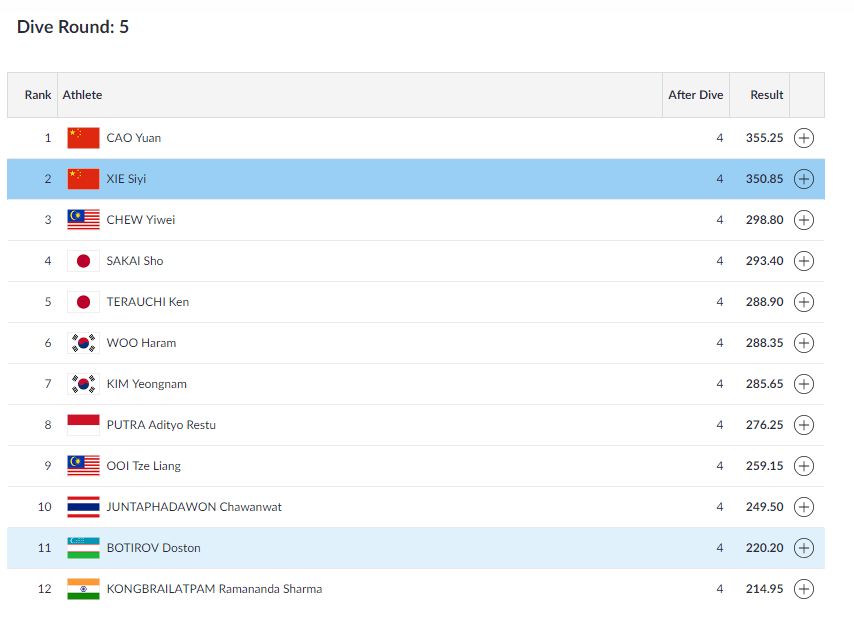 India played well. But the turnovers in the third and fourth quarter cost them the midfield dominance. Japan played a brilliant defensive structure; Mayumi Ono keeping the side together. This women’s side has grown and promises much in the future.

And Japan has won the Gold. They are the champions.

A minute left. Japan in sight of the Asian Games Gold.

India has asked for a referral; looking for a PC. 39.4 seconds left. No PC.

Less than two minutes left as Japan hold onto the ball. Not giving it away as India desperately search for a move upwards. The Japanese too good in possession. It’s 2-1 to Japan. The match moving away from India.

Less than eight minutes left in the match; India down 1-2. Too many turnovers happening for India to make a concentrated move on the Japanese striking circle. India needs to get a goal now before Japan close down the match.

Japan’s second penalty corner with a minute left in the third quarter.

GOAL! Brilliant reverse by Motomi Kawamura. Beat the goalkeeper and Monika on the line. Japan lead 2-1.

And that’s the end of the third quarter.

Asian Games 2018, Day 13 latest update: Time for third quarter. India will look to take the lead in the match.

Day 12 report: There was no stopping the gold rush from track-and-field as India exceeded all expectations for its best Asian Games performance in close to seven decades but heartbreak in hockey took some sheen off the country's sprint past the previous edition's medal haul on Thursday.

The seasoned Jinson Johnson and the women's 4x400m relay team were the joint stars with their golden show on the final day of the track-and-field competition in which India signed off seven gold, 10 silver and two bronze medals, the country's best haul since 1951.

India surpassed its previous edition's overall tally of 57 by making it 59 with two more days of competition left. The country also took its gold tally to 13, two more than 2014.

Johnson, who surprisingly lost the gold to compatriot Manjit Singh in the 800m, more than made up for that blip with a brilliant rally on Thursday. Johnson clocked 3:44.72sec to claim the top honours ahead of Iran's Amir Moradi, who turned in a timing of 3:45.62sec, his season's best effort.

And then the 4x400m women's relay team notched up a fifth successive gold to continue their remarkable dominance of the event. The Indian quartet of Hima Das, M R Poovamma, Saritaben Gayakwad and Vismaya Velluva Koroth clocked 3:28.72sec to claim the gold.

The defending champion men's team could not get the top position but pulled off a creditable silver with the quartet of Kunhu Muhammed, Dharunn Ayyasamy, Muhammed Anas and Arokia Rajiv timing 3:01.85sec to finish behind Qatar, which won gold in an Asian record of 3:00.56sec.

Adding a bronze was veteran discus thrower Seema Punia. The 35-year-old cleared a six-year-best of 62.26m for a third-place finish. Punia won a gold in the 2014 edition.

Chitra entered the race as Asian leader this season but had to settle for a bronze with a timing of 4:12.56 sec.

But losing the men's hockey semifinal to Malaysia came as massive blow for the country, which was not just aiming for a gold but also direct Olympic qualification through a top finish here.

The Malaysians handed India a heartbreaking 6-7 loss in sudden death after an exhausting shoot-off.

India will play eight-time champions Pakistan in the bronze medal play-off. Pakistan lost 0-1 to Japan in the other semifinals.

Malaysia, who had beaten India in the last-four stage eight years ago at Guangzhou, made their wasteful opponents pay for their mistakes, both in regulation time and shoot-off. Both teams were tied at 2-2 after 60 minutes.

In the shoot-off, it was anyone's game and Malaysia handled the nerves better to make their second Asiad final.

India, who had scored a record 76 goals in the group stage, were left stunned after S V Sunil missed his attempt in the sudden death. Only Akashdeep and Harmanpreet scored in the first five shots of the shoot-off while Manpreet Singh, Dilpreet Singh and Sunil faltered.

"Malaysia are the deserving winners. We committed too many unforced errors and paid the price. We did not keep things simple. We tried to show our Indian skills and by doing that we lost the momentum. It is a big setback for Indian hockey. The road to Olympics is a lot bumpier now. We missed the easiest chance to qualify," conceded Indian coach Harendra Singh.

There was no end to the disappointments in sports like volleyball, sepaktakraw where Indians continued to falter and failed to find any wins.

In squash, the Indian women's team lost the all-important match against Hong Kong 1-2 to finish second in Group B, resulting in a tougher semifinal opponent in defending champions Malaysia.

Sunayna Kuruvilla, who is Pallikal's cousin, kept India in the hunt with a fighting win over Tze Lok Ho in the second singles.

In table tennis, Commonwealth Games gold medal winning paddlers A Sharath Kamal and Manika Batra advanced to the pre-quarterfinals of the singles events. The two had cinched a historic mixed doubles bronze on Wednesday.