Happy Birthday Saina Nehwal! With badminton success and a biopic coming soon, India’s star shuttler is on a high

Birmingham: Biopics are big business in Bollywood. The commercial success in recent years of Indian movies on sports stars such as runner Milkha Singh and boxer Mary Kom have spawned a strong desire for more.

Coming soon to the silver screen will be the lives of past and present India cricket captains Mohammad Azharuddin and Mahendra Singh Dhoni, and wrestling coach Mahavir Singh Phogat. Next year will feature Saina Nehwal.

It's to be the story of her rise to become India's first winner of an Olympic badminton medal, a bronze in London four years ago. It won't be a life story, she was 22 at the time.

Indians consume these biopics, not just because the films are well made, but because they're inspirational, and Indian sport hasn't produced a lot of world-beaters. 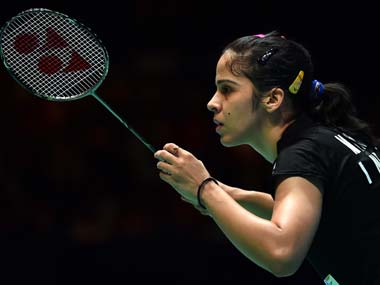 "It's a good thing," Nehwal said. "Youngsters get to see their favorite player's life."

There's always a plot twist or conflict to overcome in these movies. For Milkha Singh, the "Flying Sikh," it was finding redemption after blowing the 1960 Olympic 400-meter final, and for Kom, it was a comeback after having twin boys. Perhaps Nehwal's biopic will reveal her struggle, because her career seems to be one long success story.

Badminton is in her genes. The daughter of players - her scientist father Harvir was a university champ and her mother Usha a state champ - started in the sport at 9, was India senior champion at 17, junior world champion at 18, and winner of her first World Superseries event the following year. Since then, she's been a fixture in the top four of the world rankings, reaching the summit last year.

Nehwal was strong for her age, and pushed to eat right, play right, and focus right by Usha, whom she credits for her attitude and work ethic. Nehwal came to respect and fear her mother, and want to do right by her. Harvir was the carrot to Usha's stick; always encouraging, emptying the family bank account to pay for Nehwal's improvement, and getting her up at 4 a.m. and carrying her on a scooter 25 kilometers to training. She would spend up to three hours in the gym long before her teenage years.

She came to be noticed by SM Arif, who trained anyone who was better than good, including Pullela Gopichand. When Gopichand won the All England title in 2001, he inspired Nehwal, who had practiced on courts beside him. He proved an Indian could beat the world's best, and break China's grip on badminton's biggest titles.

Within three years, she was training under Gopichand in her Hyderabad hometown. Wishing future players would have the infrastructure he never had, Gopichand raised the millions he needed by 2008 to complete his academy, which includes 10 courts, accommodation, gym, pool and cafetaria. He had only 50 kids then, and was still taking anyone who walked in in 2010.

But since then, he's opened up a nine-court annex nearby, satellite academies in four other cities, and still can't meet demand.

Call it the Saina Effect.

Her enduring success, commercial attractiveness, and role-model appeal has sparked the badminton boom in India, especially since her London Olympic medal.

Badminton is second only to cricket in active participation in India, and the fourth most followed sport after cricket, tennis and football. Racket sales have risen 20 percent annually.

The national association cashed in by organizing a badminton league with the third highest TV following after the cricket and field hockey leagues. In the inaugural league, Nehwal was the second highest paid player after top-ranked Lee Chong Wei.

Last year, meeting Nehwal was the one of the prizes in a new junior championships sponsored by insurance company PNB MetLife and organized by Sara Foundation, which scouts for sports talent. Regional competitions for under-9s, -11s, -13s and -15s brought the top two in each to playoffs. It was such a hit, more cities were entered, an under-17s class added, more academy scholarships offered to winners and under-privileged kids, and there were more than 3,800 entries for the second tournament which ends this month.

The growth excites Nehwal, and she would just like to see more girls playing.

"I'm sure if they look at our performances," she says, "they will come."

Last year, she made the finals of the All England and world championships, though losing still annoys her. Near the end, she struggled with right Achilles tendinitis, and somehow still beat top-ranked Carolina Marin in the World Superseries Finals in December. At her first event in three months, the All England last week, her lack of match fitness exposed her in the quarterfinals.

She's the top-seeded player this week in the Swiss Open, where she turns 26 on Thursday. For now, it's all about building to the Rio de Janeiro Olympics, where she could furnish a golden post-script to her movie.

Award-winning screenwriter Amole Gupte, who will also direct the film, used the endearing Hindi word for daughter to describe his vision.

"It's a story of a tigress beti, princess beti, who has set fire to the badminton court with her prowess like no one else before," Gupte said. "The nation needs to know the story of the world No. 1 beti, an icon for the young and the old, for a long time to come."