Golf: Another good start, another poor finish for Anirban Lahiri in final round at The Open

St. Andrews, Scotland: A great start to the final round was undone on the back nine for Anirban Lahiri as he ended tied 31st in the 144th Open Championships, which ended on a Monday for only the second time since its inception in 1860.

Lahiri, three-under for the first nine holes, dropped four shots in the stretch between the 13th and 17th but he closed with a birdie to ensure an even par end to the tournament. He finished with rounds of 69, 70, 71 and 72 for a total of six-under 282. 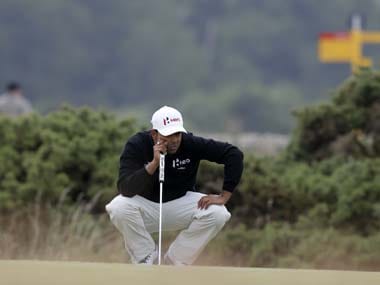 Anirban Lahiri in action at The Open. AFP

He was tied 31st at the time, the same as his best in 2012. But with many of the players still on course, he could improve a place or two and make this his best.

The best finish by an Indian is still Jyoti Randhawa's effort in 2004, when was tied for 27th.

Starting in good weather, which became warmer after a few holes and then again colder as Lahiri and playing partner, the 1999 Open Champion, Paul Lawrie, approached the turn.

For the first time this week Lahiri opened the round with a bogey on first, where both players went into the Swilcan burn (stream) guarding the first green. After birdies on first three days, he began with a bogey.

But he quickly found his bearing and hit the flagstick on the third but managed only a par.

Lahiri who started his round six shots off the lead looked improving his position after a three-under front nine. But then he dropped a lot of shots. He drained birdies on fourth, fifth, seventh and ninth to turn in three-under.

Things stayed steady with three pars from 10 to 12th before the trouble began. Then Lahiri suddenly started getting into the fairway bunkers and each time he did he lost a shot.

His card quickly showed a bunch of bogeys on 13th and then three in a row from 15th to 17th, before his first birdie of the week on the 18th brought back the smile on his face.

"Of course it is disappointing. On the back nine, I kept finding the fairway bunkers and putting myself in bad position. When you hit into these traps and get bitten, you realise how far you have to hit to stay away from them. But it has been a great learning experience and you learn from them especially when you play on the course for the first time," said Lahiri.

"I played with Paul Lawrie today and he's a past champion. He's so comfortable on the greens and it took him just five seconds to know where his putts were breaking. For me, I was still trying to figure it out. So, that speaks volume of what experience does and it showed in me today," said Lahiri.

"It’s good that I’m playing these sort of events and on such courses. I can only get better as I progress."

On the week as such, the 28-year-old Lahiri said, "I played decently. I can't say I played well. I dropped too many
shots. Over the last two days I dropped eight shots and it that was three or four better, I would have been way better off."

Lahiri, who was five-under for the first 36 holes, before needing to take a break on Saturday on account of bad weather, did not feel that he lost momentum.

"I still played well after that. If you see yesterday (third round) I played fine, but missed a lot with the putter. Today I hit the putter much better, but I hit 5-6 fairways bunkers and that cost me shots."

Lahiri will move onto Switzerland to play European Masters later this week and then travel to United States for the World Golf Championships and PGA Championships.