Germany vs Italy: Look out for these top ten players in the third Euro 2016 QF

Bordeaux: Two giants of European football clash when Germany take on Italy in the quarter-finals of the Euro 2016 in Bordeaux on 2 July. The Azzuri hold a favourable record over Germany in major tournaments and will be looking to replicate the past against Die Mannschaft.

Here's a look at the top ten players from the star-studded lineups for both teams: The driving force in Germany's midfield, Kroos keeps the team pushing forward and dictates the pace of play. Already an integral part of the World Cup-winning side in Brazil in 2014, Kroos' importance to Germany has arguably grown since his move from Bayern Munich to Real Madrid two years ago. The 26-year-old has developed into a complete midfielder. He tracks back well and passes with precision.

Kroos has made 444 passes so far at Euro 2016 — more than any other player — and has a passing accuracy of 92.34 percent, according to the Opta statistics service.

"He controls the tempo for us, plays very clever passes, and has taken responsibility in difficult situations," defender Jerome Boateng said of Kroos at the team's tournament base at Evian-les-Bains. "He's become more dangerous shooting on goal and we hope it continues like that." Quiet and softly spoken, Boateng likes to lead by example.

It's a role that he has grown into for Germany and his club side Bayern Munich.

Boateng anchors the German defense expertly — it's no coincidence the side is the only one yet to concede a goal in the tournament — while building attacks from deep.

After scoring his first goal for Germany in the 3-0 win over Slovakia in the round of 16, Boateng will be encouraged to roam forward.

Intelligent, precise and calm, Boateng has a keen eye for the runs of teammates, and he has a pass to match. 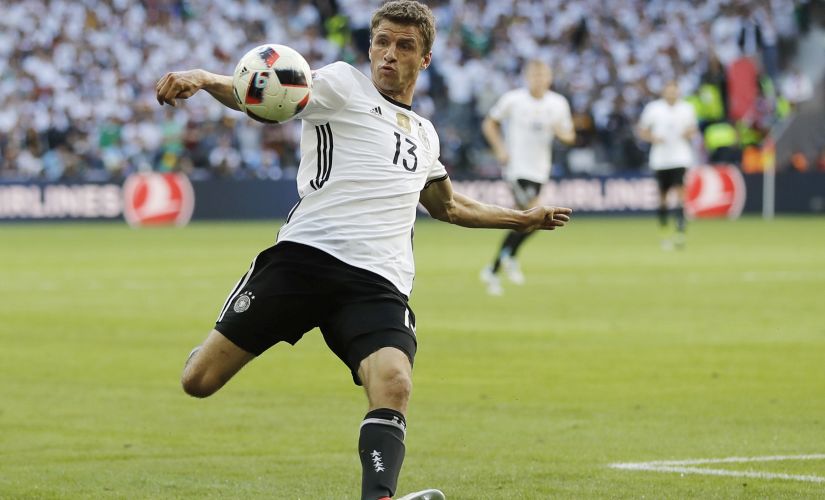 Thomas Mueller will hope to stop his European Championship jinx and score against Italy. AP

Mueller has a curious relationship with the European Championship.

In nine games over two tournaments he is yet to find the net for Germany, a statistic that contrasts his goal scoring feats at the World Cup, where he has scored 10 goals in 13 games over two events.

It's not as if Mueller hasn't had any opportunities. At Euro 2016, he's missed a series of chances particularly in the games against Northern Ireland and Slovakia. So far in the tournament, Mueller has had 17 shots at goal.

Mueller arrived in France following his best season yet for Bayern Munich, scoring 32 goals and setting up 12 others, helping the side to a Bundesliga and German Cup double.

"As soon as a forward has chances it's a good sign," Germany coach Joachim Loew said before the Slovakia game. Mario Gomez has worked his way back into the German squad. AP

Gomez has had to overcome a lot to stake his claim for a place in Germany's squad, never mind the starting 11.

Gomez missed Germany's World Cup win in 2014 when he was left out of the squad after an injury-blighted season. After impressing for Besiktas in Turkey, he was recalled to the German side in November.

He has started Germany's last two games at Euro 2016, scoring in both and earning praise from Loew for creating space for the other attackers.

"The only thing that counts here for me is that we become European champions," Gomez said this week. Manuel Neuer will be tested as Italy have a favourable record against Germany in major tournaments. AP

Neuer is considered by many to be the best goalkeeper in the world, though he'll be facing some competition in Italian veteran Gianluigi Buffon at the other end.

Neither goalkeeper has conceded a goal yet at the tournament, as Buffon was rested for Italy's 1-0 defeat to Ireland in the group stage.

Neuer has needed to be at his best at times in Euro 2016, particularly in the opening game against Ukraine and then again against Slovakia when he denied Juraj Kucka an equalizer before the break.

To be fair, he hasn't had much to do, but when he's been called into action he almost always delivers. Lapses in concentration from inactivity appear a thing of the past.

"Over the last four or five years he has shown that he is an outstanding goalkeeper in every area," Buffon said of Neuer on Friday.

Italy have history on their side as the Azurri have generally succeeded in beating Germany in past major tournaments. Their last meeting in a major tournament was in Euro 2012 when Mario Balotelli scored a screamer to lead the Italians to a 2-0 victory over Die Mannschaft. Here are five Italy players to watch out for: Veteran Gigi Buffon will be instrumental in keeping Germany out. AP

Buffon has been considered the best goalkeeper in the world for years, though he is now facing some competition in Germany's Manuel Neuer at the other end.

Neither goalkeeper has conceded a goal yet at the tournament as Buffon was rested for Italy's 1-0 defeat to Ireland in the group stage, with the Azzurri having already won Group E with a match to spare.

Buffon has been an ever-present in the Italy team since making his debut in 1997 and is the Azzurri's most-capped player with 159 appearances.

At the age of 38, the Juventus goalkeeper shows little sign of slowing down.

Buffon is fresh from helping Juventus secure its fifth successive Serie A title, setting a league record of 974 consecutive minutes without conceding a goal in the process. Italy's defence will be bolstered by Leonardo Bonucci. AFP

He also helped Italy shut out two-time reigning European Champions Spain in the round of 16.

Bonucci is capable of launching attacks from the back as well, and made a telling 40-meter pass for Italy's first goal in its 2-0 win over Belgium. Italy's Mattia De Sciglio has benefited from the trust shown to him by Antonio Conte. AP

De Sciglio's performances at Euro 2016 have reportedly alerted the interest of a number of clubs but AC Milan insists the 23-year-old is not for sale.

That is a long way to come for a player who has been much maligned of late following an indifferent season and was expected to only play a bit part in this tournament.

De Sciglio put in arguably his best performance for club or country in the 2-0 win over Spain, shutting down one of the more quick-minded and experienced players on the pitch in David Silva.

The full-back, who also contributed to Italy's attack down the left side in a standout performance, credits Italy coach Antonio Conte for his resurgence.

"He helped me a lot because he made me feel his confidence all season, calling me up even in months when I didn't manage to give my best," De Sciglio said. The fairytale continues for Graziano Pelle at the Euro 2016. AP

A late bloomer, Pelle is proving crucial to Italy at Euro 2016.

The Southampton forward scored in stoppage time in the opening win over Belgium and did the same against Spain in the round of 16.

That took his tally to seven goals in 16 matches since a goalscoring debut in a 1-0 win over Malta, at the relatively late age of 29.

As well as his goal against Spain, Pelle was a constant threat to the two-time reigning champion, winning headers and releasing attacking partner Eder with clever flicks. Eder is the perfect foil to Graziano Pelle and can trouble Germany's backline. AFP

The inclusion of Brazilian-born Eder caused much debate in Italy, with his coach at Inter Milan, Roberto Mancini, saying footballers born outside of Italy should not play for the national team.

Eder could change that sentiment after he scored a late winner against Sweden to help Italy secure top spot in Group E with a match to spare.

The forward also played a crucial part in the opening goal against Spain as goalkeeper David de Gea couldn't hold on to his free kick and the ball was poked over the line by Giorgio Chiellini.

Eder, whose great-grandfather was Italian, was born in Brazil and moved to Italy at 18 when he signed for Empoli.

A swift, diminutive player, he is the perfect partner for the bigger Pelle.