Berlin: The football teams in Germany's third-division will wear special jerseys against hate, racism and discrimination this weekend following the racially motivated gun attack in Hanau and the racist abuse in the league a week before. 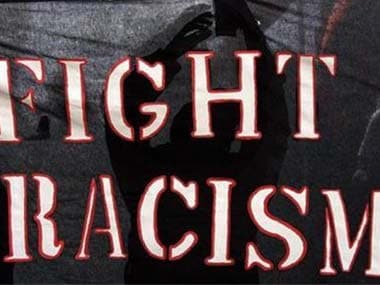 File image of a banner held up at a protest. Reuters

The German football federation said Friday that nearly all the division's teams, the referees and children accompanying the players onto the field would wear shirts with the motto "red card for racism."

There will also be a minute's silence and flowers laid for the victims and families affected by the attack in Hanau, where nine people of foreign background were killed in a rampage by a German gunman.

"We stand together against anyone who attacks our values," federation president Fritz Keller said, referring to the fan reaction when one Preußen Münster supporter directed monkey chants at Würzburger Kickers defender Leroy Kwadwo last Friday.

Münster fans shouted "Nazis out! Nazis out!" and forced the perpetrator to leave.

"The reaction and unity of the fans and clubs are impressive, both immediately after the shameful episode in Münster and now, when it comes to continuing the fight against racism," Keller said.

The German football federation described the fatal attacks in Hanau as "an attack on our deepest convictions and thus on ourselves."