It's all level in the Mixed Doubles Finals match! A match tie-breaker will decide the title!

The first game to go to deuce and Mirza/Dodig grab the opportunity with both hands. They lead 6-4 in the final.

The Serb is one win from being the 3rd man to hold all FOUR major titles at the same time.

Murray 136-1 after winning first two sets in best of five (only defeat vs Nalbandian at Wimbledon 2005).

The Serb saved the only break point he faced and broke Thiem twice.

Serena Williams is through to her fourth French Open and 27th Grand Slam final!

First at Roland Garros. She awaits the winner of Williams-Bertens.

It's the 18th Grand Slam title for Leander Paes - 10 in Mixed Doubles and 8 in Men's Doubles.

Paes/Hingis jumped to a 8-6 lead but Mirza cuts it short with an amazing forehand winner. Back on serve.

Now, Hingis/Paes have pulled two points back! 3-3. This is heading to a close finish.

Mirza/Dodig have surged ahead in the match tie-break, 3-1.

It's all level in the Mixed Doubles Finals match! A match tie-breaker will decide the title! 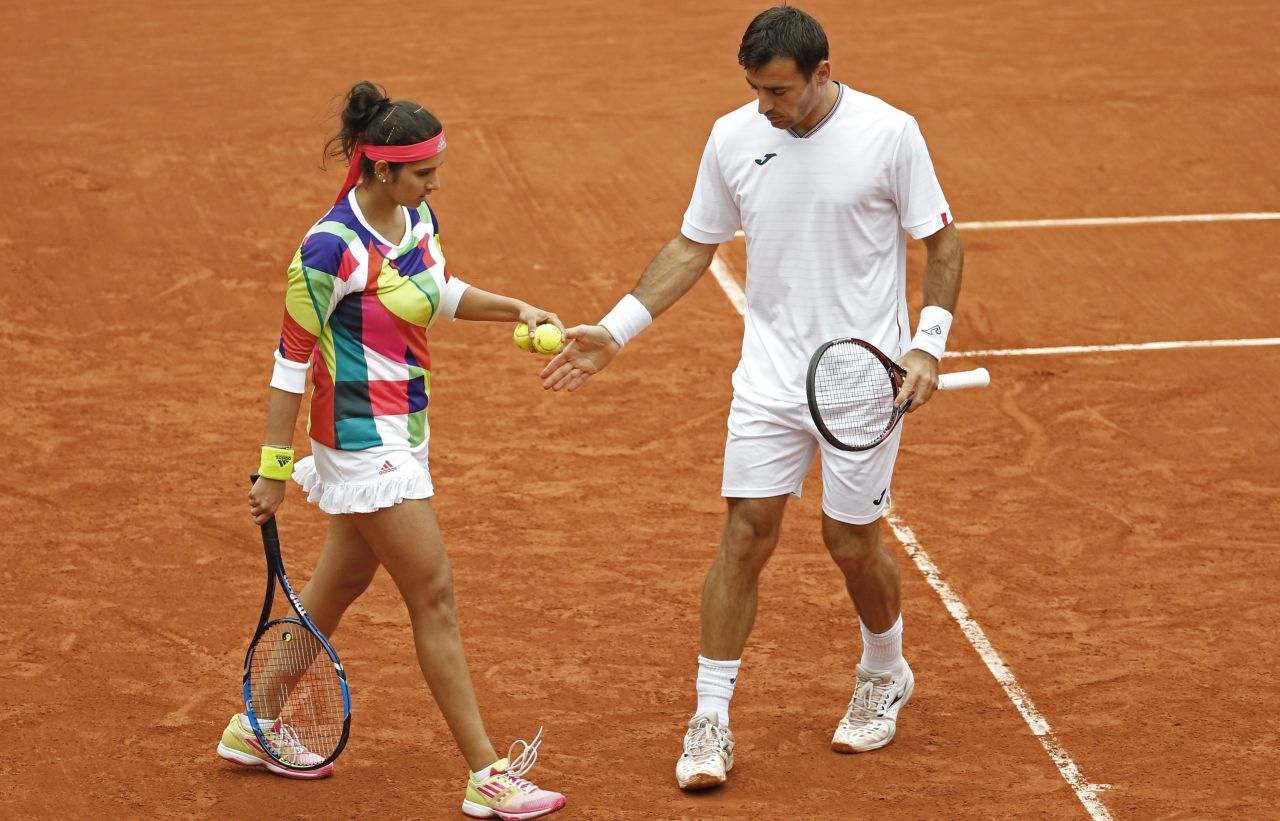 It's back on serve in the second set! Some excellent returning from the Indo-Croat duo as they make it 3-3. 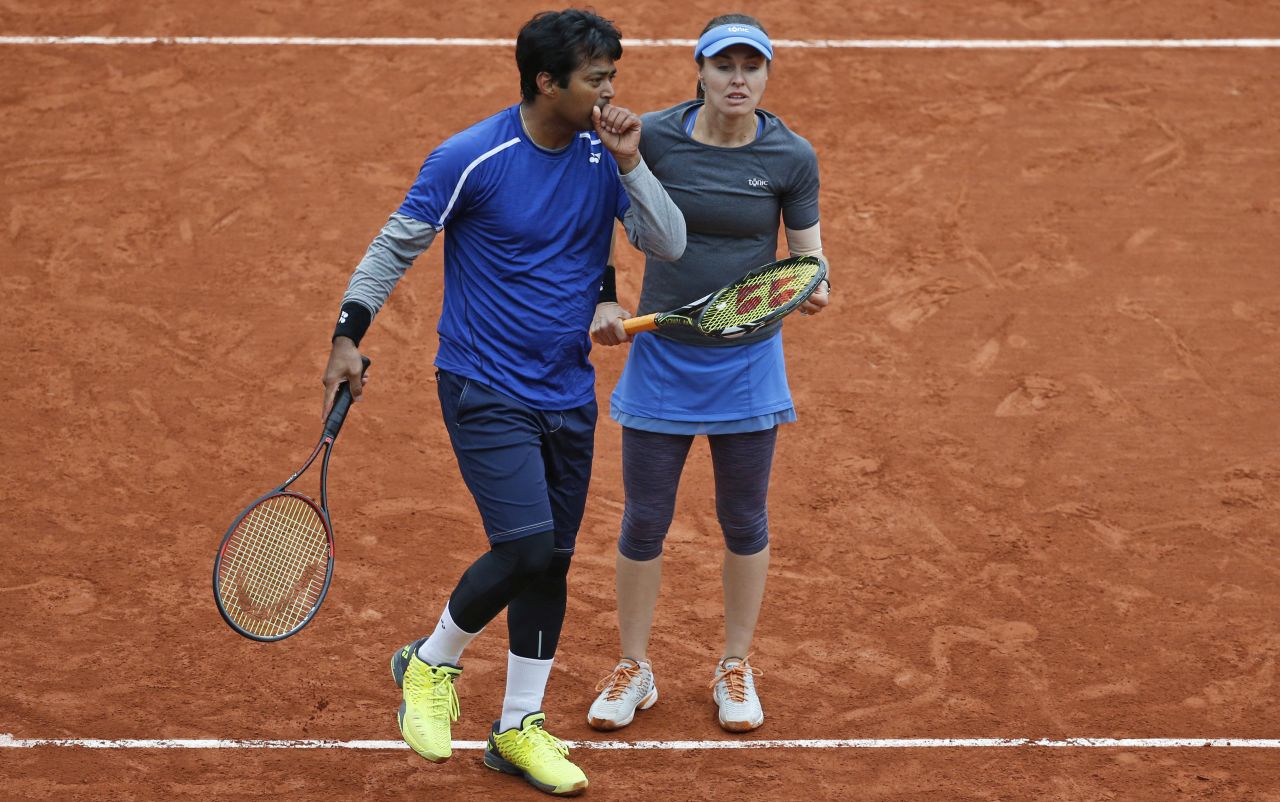 Preview: Novak Djokovic, fresh from breaking the $100 million prize money barrier, aims for a place in a fourth French Open final Friday with fans handed the chance to watch the world number one for just $22.

After a rain-ravaged tournament saw only two hours of play on Monday and Tuesday, Roland Garros organisers have been battling to get back on schedule.

Usually, just the men's semi-finals are played on the second Friday but this year all four semi-finals in the men's and women's singles are being staged with two on the Philippe Chatrier Court and two uniquely on the Suzanne Lenglen arena. That has led organisers to offer 8,000 seats at 20 euros ($22.3) for Lenglen where Djokovic will face Austria's Dominic Thiem after Samantha Stosur and Garbine Muguruza have completed the first women's last-four clash.

In stark contrast, on Saturday and Sunday, the women's and men's finals will respectively be held, as tradition demands, on Philippe Chatrier.

Tickets for those matches, where Serena Williams could equal the Open era majors record of 22 titles and Djokovic can win a first Paris title and complete the career Grand Slam, were being sold late Friday for 555 euros ($620) and 1,330 euros ($1,483).

Roland Garros generosity was no doubt encouraged by the sight of a two-thirds empty Suzanne Lenglen court on Thursday where Thiem defeated David Goffin to make his first semi-final at a major and Kiki Bertens saw off Timea Bacsinszky to reach a maiden women's last-four match-up.

Temperatures at a shivering 12 degrees did little to fill spaces and similar autumnal gloom is forecast for Friday.

The 29-year-old top seed, who already holds the Wimbledon, US and Australian Open titles, will start as overwhelming favourite against Thiem who he has defeated in straight sets in their only two career meetings.

Djokovic will be playing in his 30th Grand Slam semi-final and eighth in Paris while Austrian 13th seed Thiem is into his first at the majors.

Djokovic won the first of his 11 majors at Australia in 2008 as a 20-year-old. Thiem, 22, has yet to make the breakthrough to a final at the Slams.

But he is one of the in-form players in 2016 with his 41 match wins second only to Djokovic's 42. He also has a season-best 25 wins on clay, a run which included a victory over Roger Federer in Rome and the title in Nice.

On Chatrier, Andy Murray has history on his mind as he aims to be the first British man since Bunny Austin in 1937 to reach the final when he faces defending champion Stan Wawrinka.

Murray won't under-estimate Wawrinka who stunned Djokovic in last year's final. The 31-year-old Swiss is the oldest semi-finalist in Paris since Jimmy Connors in 1985.

Murray leads their head-to-head 8-7 but Wawrinka has won their last three meetings. The third seed has also won both their tour claycourt meetings -- in Rome in 2008 and Monte Carlo in 2013.

Also on Chatrier, 34-year-old Serena Williams, who is aiming to be the oldest ever women's champion on Saturday, faces the unexpected challenge of unseeded Bertens.

Serena almost saw her hopes of winning a record-equalling 22nd Grand Slam title in Paris blasted out of the water in a nervy 5-7, 6-4, 6-1 quarter-final win over lowly-ranked Yulia Putintseva.

The other semi-final sees Stosur, 32, looking to return to the final for the first time since 2010 when she faces rising Spanish player Muguruzu, last year's Wimbledon runner-up.

The French Tennis Federation raised the prize money by 6.8 per cent overall compared to three years ago, before the pandemic affected the past two editions.