France meet neighbours Belgium in the semi-finals of the World Cup on Tuesday. Follow our live blog for scores and updates from Russia.

France are through to the World Cup final. Umtiti's second-half goal gets the job done for France.

UMTITI!
Super header from the centre-back as Griezmann delivers a brilliant corner.
00:18 (ist)

Seconds before the break, Umtiti's mistake almost cost his team. He fails to clear a cross from right but Lukaku takes the chance by surprise and before he controls it, the ball heads out.
22:37 (ist)

The playing XI of both the teams are out

Of 11 competitive matches, Les Bleus have won five, lost three and drawn three. France routed Belgium 5-0 at Nantes in the group stage of the 1984 European Championship as Michel Platini scored a hat-trick, then won 4-2 in the third-place game of the 1986 World Cup. Emile Veinante scored in the first minute of France's 3-1 win in Paris in the Round of 16 at the 1938 World Cup.

France take on Belgium at 11.30 pm today at Saint Petersburg

The semi-final matchup of the European neighbours promises to be full of intrigue as France aim to return to the final for the first time since a Zinedine Zidane-led team did so in Germany in 2006.

Belgium will be seeking to break new ground by reaching the final for the first time in their history -- indeed they have only reached the semi-finals once before, in 1986.

The winner will face either Croatia or England, who play on Wednesday, in the final at Moscow's Luzhniki Stadium on Sunday.

So that's all for today. So one team that will compete in the final of the FIFA World Cup 2018 has been decided. France will take on either the winners between England and Croatia. Belgium might have deserved to have more from their campaign but today, France deserved to go. They got the goal and then organised themselves to ensure Belgium are frustrated till the end.

Some big players like Romelu Lukaku went missing today. Hazard and De Bruyne did well but it was just not enough.

We will be back with tomorrow's second semi-final. So have a good day!

Stats from the match! 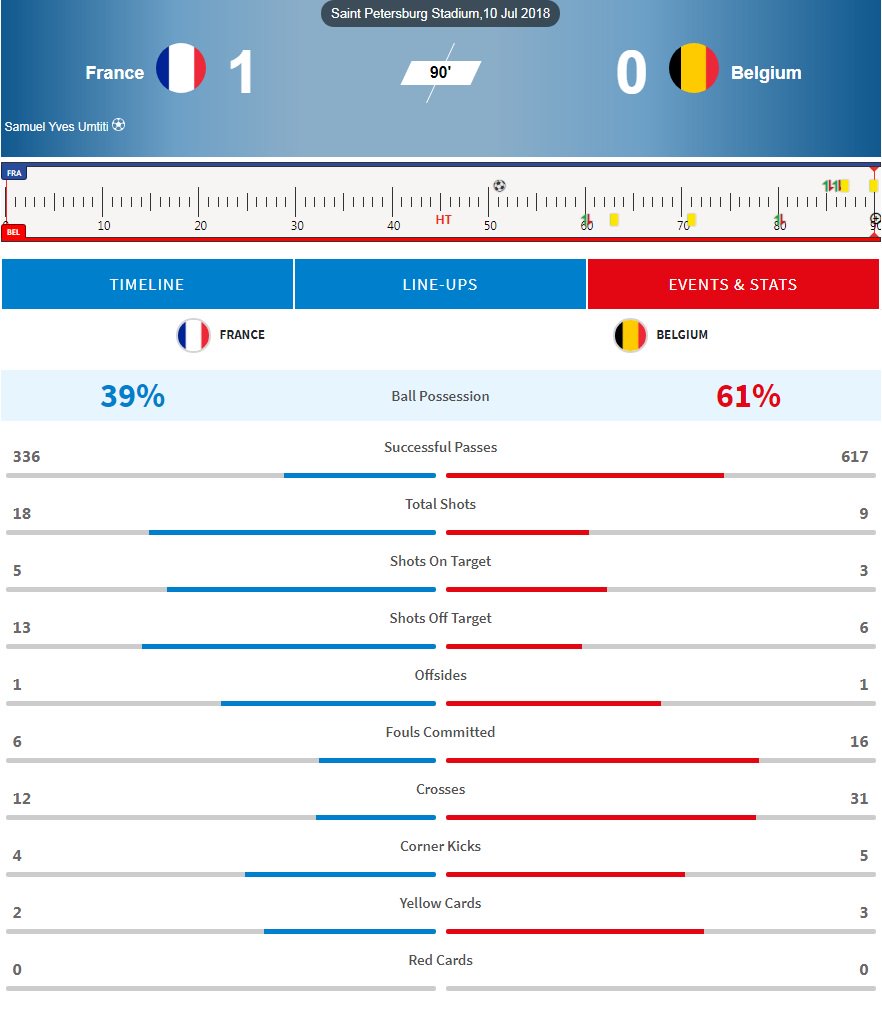 No fear. All fire. 🔥 pic.twitter.com/g85iUwrbF1

Mbappe was superb tonight; the rest of the French team a bit less flamboyant, but Deschamps won't mind - all he desire is victory. He is one step away from eternal glory, 20 years after he won the World Cup as a player. At the time Les Bleus faced Brazil and won 3-0 thanks to a double header from Zidane. On Sunday, they will meet the English, spearheaded by Gareth Southgate, founder of the Order of the Navy Waistcoat, and Harry Kane, or Croatia, who hopes rest with Modric in the midfield. It should be a cracking semi-final tomorrow.

From us here in St Petersburg, it is good night!

3 - Since reaching their first one in 1998, France have reached more World Cup finals than any other nation. Showpiece. #FRA #FRABEL #WorldCup pic.twitter.com/mmpFti6XnR

And that’s it! French players storm the pitch. Deschamps is dancing and Griezmann is in tears. Scenes of delirium: France will play the World Cup final on Sunday against the winner of tomorrow’s semi-final between England and Croatia. Axel Witsel looks utterly dejected. Ultimately, his team didn’t do enough to trouble a well-organised France. Belgium’s golden generation is just that - golden but not victorious. They reached the semis, but ultimately are not world beaters. Umtiti’s goal and France vintage defending was the difference between the two sides in a semi-final that won’t go down as a classic.

France are through to the World Cup final. Umtiti's second-half goal gets the job done for France.

How many saves from Courtois? He pulls off another one to deny Tolisso.

Two nominal strikers for Belgium now. It's the final throw of the dice. They have two minutes left. At the other end, Griezmann should have done better. France trying to run down the clock with a lot of time-wasting.

Chance for Griezmann to finish the game off but Courtois saves it.
Load More

The Belgians have won all five of their matches in Russia, scoring 14 goals and leaving Brazil and Japan by the wayside. In the quarter-final against Brazil they showed their adaptability and in the last-16 they showed their resilience by fighting back from 0-2 down against the Japanese.

Belgium coach Roberto Martinez has shown that he can make changes to his system, using a 4-3-2-1 for most of the tournament, but adapting to a 4-3-3 to exploit Brazil's weaknesses down the flanks. France and Belgium will battle for a place in the FIFA World Cup final. AP

Martinez has succeeded where his predecessors failed by making the team greater than the sum of its parts. The Spaniard has shown great tactical pragmatism by setting up his side to suit the characteristics of his best players and exploit the weakness of opponents. This was exemplified in the team's 2-1 quarter-final victory over Brazil, when Kevin De Bruyne was deployed as a false nine while Romelu Lukaku and Eden Hazard where pulled wide.

It remains to be seen what system he will use against a French side that is rock solid in midfield. One change forced on Martinez is at right back where he will have to find a replacement for the suspended Thomas Meunier. Celtic's Dedryck Boyata may feature as a right-back.

The French drew one group game (against Denmark), but their World Cup has been one of constant progression built around goalkeeper Hugo Lloris, central defenders Raphael Varane and Samuel Umtiti and midfielders, N'Golo Kante and Paul Pogba.

Olivier Giroud provides a focal point in attack. Add to that the pace of Kylian Mbappe and Antoine Griezmann, who will also drop back to help in the middle and Didier Deschamps has a team without any apparent weaknesses.

If Belgium persist with three central defenders, Deschamps will look to full-backs Lucas Hernandez and Benjamin Pavard to push forward and look to exploit spaces between the Belgian defensive trio of Vincent Kompany, Toby Alderweireld and Jan Vertonghen.

France will have to be wary of Eden Hazard and De Bruyne's pace on the break. Martinez and his players have already shown they can change their formation depending on their rivals and Tuesday promises to be an absorbing tactical battle.