London: Australian driver Daniel Ricciardo will join the Renault Formula One team next season after agreeing on a two-year deal, the French manufacturer said in a statement on Friday.

"It was probably one of the most difficult decisions to take in my career so far. But I thought that it was time for me to take on a fresh and new challenge," said Ricciardo. 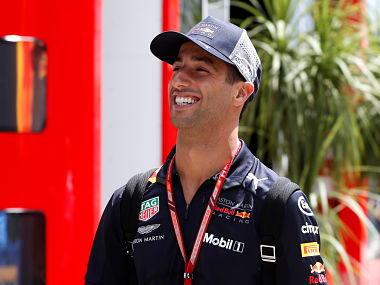 "I realise that there is a lot ahead in order to allow Renault to reach their target of competing at the highest level but I have been impressed by their progression in only two years, and I know that each time Renault has been in the sport they eventually won. I hope to be able to help them in this journey and contribute on and off track," the 29-year-old said in a statement released by Renault.

The surprise announcement will ripple through the driver market, with other teams set to shake up their line-ups as a consequence.

"Daniel Ricciardo has advised us that he is to leave the team at the end of the 2018 season," Red Bull said in a statement without saying where he was headed.

"We fully respect Daniel's decision to leave Aston Martin Red Bull Racing and we wish him all the best in his future," said Red Bull team boss Christian Horner.

"We would like to thank him for his dedication and the role he has played since joining the Team in 2014, the highlights, of course, being the seven wins and the 29 podiums he has achieved so far with us.

"We will now continue to evaluate the numerous options available to us before deciding on which driver partners Max Verstappen for the 2019 season."

Jerome Stoll, President of Renault Sport Racing said, "Renault decided to come back to Formula One to fight for World Championships. Signing Daniel Ricciardo is a unique opportunity for the Groupe Renault towards this objective that could not be missed. We welcome Daniel's arrival to our team, still in the making, but more motivated than ever."

Ricciardo had been out of contract at the end of the year and was assessing his options, but any hope of joining champions Mercedes disappeared when they retained titleholder Lewis Hamilton and Finland's Valtteri Bottas.

Glamour team Ferrari have shown no obvious interest either, with Sauber's Monegasque rookie Charles Leclerc tipped to replace Kimi Raikkonen if the 38-year-old 2007 world champion is not kept on.

The extrovert Australian, a fan favourite with his permanent smile and thrilling overtakes, had indicated before the August break that he was set to stay at third-placed Red Bull and was just 'fine-tuning' details.

Former champions Renault are the best of the rest and had a vacancy, with Spaniard Carlos Sainz there on loan from Red Bull alongside Germany's Nico Hulkenberg.

Sainz could return to the Red Bull fold alongside his former Toro Rosso teammate Verstappen but has also been linked to McLaren, where he could form an all-Spanish line-up with Fernando Alonso.

McLaren have not won a race since 2012 and are going through a rebuilding phase.