Formula E: From teams and drivers to engines, here's all you need to know about the all-electric racing series

Formula E is the new kid on the block. Yes, we say that despite the fact that the 2017-18 season will be the series’ fourth season. While original motorheads might yet be hesitant in flocking to follow the all-electric racing series, the manufacturers are hyper interested. In fact, Formula E has more manufacturers participating in the current season than Formula 1 does. In the seasons to come, there are more manufacturers that will join the series — Mercedes, Porsche and Nissan will join Renault, Mahindra, DS, Jaguar and others. For how long will Ferrari ignore the growing importance of Formula E for car manufacturers?

Admittedly, the car manufacturers are in the sport for innovating electric car technology. But certainly, they seem to be having fun and entertaining us along the way. It is hard to not introduce Formula E by comparing it with Formula 1. But for the die-hard fans out there, maybe this is the best route possible. In many ways, the sporting and business model of Formula E seems to be implementing learnings and improvements from the models in place for Formula 1. Yes, Formula E is un-Formula 1 like. Let’s explain. 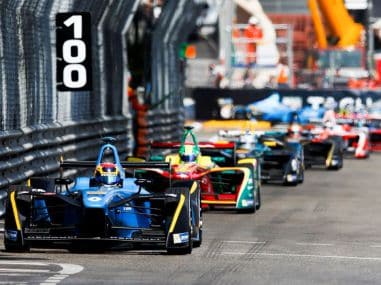 Formula 1 and its teams have had a head start when it comes to capturing the attention of Motorsport fans world over as the sport has been around for more than 60 years. But Formula E is making more of an effort to reach out to fans. The teams are leaner in setup, operations and costs (they have a budget cap) than their Formula 1 counterparts and some of the teams have iconic status in some of the other global racing series.

Andretti Autosport, who run the MS&AD Andretti Formula E team, have a rich racing history in America, whereas Jaguar Racing is the former Formula 1 team. Williams, the company that owns and manages the Williams F1 Team, helps run Jaguar Racing. Dams has run many successful operations in junior racing series and was co-founded by former Formula 1 driver, Rene Arnoux. By now, it is public knowledge that there’s an Indian-owned team — Mahindra Racing. After successful exploits in the two-wheeler racing categories (Moto 3 and Moto 2), the Indian automobile manufacturer has already established itself as a race-winning team by winning last season (Berlin E-Prix).

By the way, if you are a Hollywood fan, chances are that you are a Leonardo di Caprio fan too. The actor co-owns the Venturi Formula E Team and his reason to partner with Formula E is to promote sustainability.

If you are a Formula 1 fan, there’s a high chance that you will identify with nearly 90 percent of this year’s Formula E grid. For talented Formula 1 drivers who have failed to secure cockpits with top teams, Formula E has offered an alternate global platform to showcase their skills and earn some money.

Sebastian Buemi, a former Red Bull Racing junior driver who couldn’t find himself a cockpit with Red Bull Racing (between 2012-2014), switched to other forms of racing, including Formula E. He is the most successful Formula E driver with 12 wins to his credit, followed by Lucas Di Grassi (the reigning Formula E champion) with six. In fact, it is a pleasant surprise that all of the previous series champions are former Formula 1 drivers — Nelson Piqeut Jr (2014-15), Sebastian Buemi (2015-16) and Lucas Di Grassi (2016-17).

The other well known drivers include Nick Heidfeld, Kamui Kobayashi, Sam Bird, Felix Rosenqvist, Neel Jani among others. While we have joked in the past that Formula E is a good retirement option for drivers who have failed to make the cut in Formula 1, the truth is that these drivers are guarantee that Formula E attract top-class talent and that the competitive quotient is comparable to Formula 1. There are also rumours that Felipe Massa will be joining Formula E either this season or next.

Also, since the cost of team operations isn’t a burden on the teams, there are lesser chances of a pay driver to be hired.

Frankly, Formula E races can offer more entertainment than Formula 1 and this isn’t only because they are organised at street races. The teams use a standard chassis (they are allowed to use their own powertrain) and the gaps between the teams is narrow enough to offer racing in close quarters. Eight out of 10 teams have already won a Formula E race — a far cry from Formula 1’s snooty efforts to ensure that winning races if a privilege only for a few.

Apart from that, Formula E races (they are called E-Prix) are usually held on the Saturday of the weekend, with the hope to attract larger audiences. In special cases where there are double headers (or two races at each venue), the first race is held on Saturday followed by the second one on Sunday. In the 2017-18 season, there will be 14 races in total across 11 host cities. Also, the maximum duration of an E-Prix is 50 mins (perhaps keeping in mind the low attention spans of millennial audiences) and includes a mandatory pit-stop.

Since this is an FIA supported series, the top-10 drivers are awarded points, just like they are in Formula 1. Additionally, there are points (3) for scoring pole position and for registering the fastest lap of the race (1 point if the driver has also finished in the top-10).

Formula E cars are battery-powered. In fact, they don’t have engines, they use electric motors and the assembly is called a ‘powertrain’. On the other hand, Formula 1 cars have both, a combustion engine (petrol-powered) and a complex setup of batteries that unleash electric power. Although Formula 1 is chasing engine noise, Formula E is happy to have futuristic-sounding buzzing engine sounds.

While there are only four power unit manufacturers in Formula 1, since Formula E’s second season, the series has at least nine powertrain manufacturers — all of them innovating technologies to improve the efficiency, power, reliability and reach of their electric motors.

Unlike Formula 1 cars, the Formula E powertrain isn’t designed to unleash hyper power. This is why comparing the acceleration and top speeds would be unfair. However, if you still insist, the powertrains are nearly half the measure of their Formula 1 counterparts. They roughly generate 270 bhp (maximum 200kws of power) a far cry from Formula 1’s near 900bhp of power. But given Formula 1’s growing interest in going hybrid, how long before Formula 1 relies more on electric than combustion power? We’ve often debated on our podcast if Formula 1 will go the Formula E way.

Formula E’s official tyre supplier is Michelin, and keeping in mind the road requirements of electric cars, the racing car tyre is also 18 inches. The treaded tyre is suitable for dry as well as wet conditions. While fans may complain about missing the spectacle of lightening pit-stops to change tyres, here’s the real-world simulation that Formula E attempts. The tyres are meant to race in all conditions and a single set of tyres is expected to last an entire racing weekend.

Formula E’s motive is clear — take the sport to the fans. Keeping this in mind, the series organises races on city circuits. In 2017-18, they might visit a few racing circuits, but their best attempt is to race in the cities and they will be doing so in some of the iconic cities across the world — Hong Kong, Rome, New York, Mexico City, Berlin and others.

Frankly, ‘taking the sport to the masses’ is a great idea to promote Motorsport, especially when traveling to circuits that are usually built outside of city could a time-consuming and traffic-causing affair.

Additionally, Formula E’s race tickets are much cheaper than Formula 1’s. Basically, in a lot of ways, Formula E is far more accessible and ‘fan friendly’ than Formula 1 — an aspect that fans across any sport would appreciate the most.

The series has already garnered interest and investments from some of the world’s most well-known and largest automobile companies. It is only a matter of time that Motorsport fans will follow suit. However, to accelerate interest among the global audiences, would a big ticket signing of a current (or former) Formula 1 driver help Formula E? Well, Massa and Jenson Button are definitely good options for the series to consider.

While comparisons with Formula 1 are unavoidable, Formula E has done well to ensure that they constantly communicate that their goal as a racing series is different. Porsche’s pulling out of the World Endurance Championship program to focus only on Formula E immensely helps the series’ brand image and makes it an interesting investment option for other car manufacturers.

To build further on their inaugural seasons of success, Formula E also needs to work on introducing faster racing cars (we have interacted with a driver who chose to not race in Formula E because the cars weren’t quick enough!) while developing battery technology that helps cars last an entire race distance. At the moment, the mandatory race pit-stop includes a car swap, an act that hasn’t been accepted yet by racing aficionados.

Also, the ‘fan boost’ system (a social media led voting initiative that offers three drivers additional power of ~30 kw at certain key moments of the race) is gimmicky and takes away from the serious racing the series otherwise offers.

Formula E’s future seems exciting and this is definitely a series we’ve added to our list of series to follow. While Formula 1’s ‘track to road’ transfer of technology is often questioned, Formula E’s relevance in our world of fossil-fueled cars and pollution seems almost natural. And by the way, if this long read hasn’t sparked your interest in Formula E, here’s one last fact.

Formula E’s support series is called Roborace. This series will have autonomous racing cars race against each other at Formula E venues. Will we see self-driving cars from Uber and Google compete with each other in the near future?