Arrivabene's contract has not been renewed following another disappointing season, with management errors blamed for the team missing out once again to Lewis Hamilton's Mercedes. 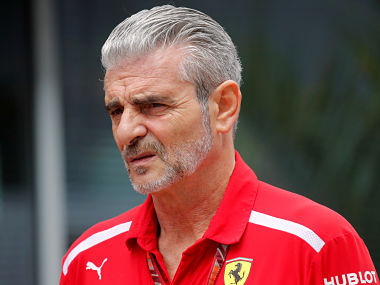 Ferrari president John Elkann, who replaced Sergio Marchionne who died last year, has decided Binotto, 49, is the right man to lead the Italian stable in 2019.

"After four years of untiring commitment and dedication, Maurizio Arrivabene is leaving the team," Ferrari said in a statement.

"The decision was taken together with the company's top Scuderia Ferrari's Team Principal. All technical areas will continue to report directly to Mattia (Binotto)."

Arrivabene, 61, a former marketing chief with tobacco giant Philip Morris, replaced Marco Mattiacci in 2014, but during his four-year reign, Ferrari failed to break Mercedes' stranglehold on the F1 title.

Swiss-born Binotto has been with Ferrari since 1995, starting off as a test engineer, moving up to Chief Engineer before being appointed Technical Director in 2016.

Ferrari's Sebastian Vettel failed to win the title in 2017 and 2018 despite a close fight over much of the season with Mercedes' Hamilton as he finished second both times.

The team will have a new driver next season with Monaco's Charles LeClerc replacing Raikkonen, who is moving to Sauber.