FIFA's corruption crisis: Reactions from around the world

Football's governing body FIFA was rocked early Wednesday morning by the arrests of six senior officials from the Baur Au Lac Hotel in Zurich by the Swiss Police in connection with a US Department of Justice investigation on a variety of charges ranging from wire fraud conspiracy to money laundering. Simultaneously, news emerged of the Swiss authorities investigating unnamed persons in relation to the bidding process for the 2018 and 2022 World Cups, though this investigation was prompted by FIFA.

Reactions came in from from ex-players and officials, as well from Jack Warner, one of those indicted by the DOJ but who resigned from FIFA in 2011. He has claimed he is innocent of all crimes.

There can't be a more corrupt, deplorable organisation on earth than FIFA. The house of cards is falling. Time for change!

If Blatter had even a crumb of dignity remaining, he'd walk away now, creep back to his lair, sit in his armchair and stroke his cat.

FIFA officials arrested for bribery and corruption? In other news the sky is blue and Elvis is dead. 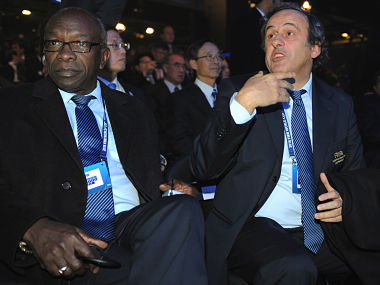 FIFA has said that Friday's election, when Prince Ali bin al Hussein challenges incumbent Sepp Blatter, will go ahead despite the arrests and a separate investigation into the bidding process for the 2018 and 2022 World Cups.

"As one of the associations who nominated Prince Ali, it will not surprise you to learn that if the election for president goes ahead, the FA will be voting for him," Dyke said in a statement on the FA website.

"However, there must be a question mark over whether the election should take place in these circumstances.

"Clearly things are changing very quickly and our delegation to the FIFA congress in Zurich, which I am leading, will discuss the position and what we should do about it with our colleagues in (European governing body) UEFA when we meet tomorrow (Thursday) morning."

Dyke, a vocal critic of 79-year-old Blatter, who is seeking a fifth term in office, described the day's events as "very serious for FIFA and its current leadership".

The seven FIFA officials were arrested in Zurich after the US Department of Justice issued an indictment charging 14 people with racketeering, wire fraud and money laundering conspiracies over a 24-year period.

Swiss police also seized documents and electronic data after raiding FIFA's Zurich headquarters as part of a probe into bribery allegations regarding the 2018 and 2022 World Cups, awarded to Russia and Qatar respectively.

"Our executive committee meets this afternoon and tomorrow there is a meeting of all the national associations so there's nothing else to say until tomorrow morning or this evening," Platini told AFP.

Europe's top footballing body said it was "surprised and saddened by the events that occurred this morning in Zurich" in a separate statement.

UEFA also said it was "waiting for more complete information", adding that "other statements will be made at the appropriate time".

Its executive committee would meet in Warsaw later Wednesday before the Europa League final.

Swiss authorities on Wednesday said a seventh top football official was arrested following a US request in a corruption probe into the awarding of the 2018 and 2022 World Cups to Russia and Qatar and into bribe taking for sports contracts.

FIFA president Sepp Blatter, according to his spokesman, is not involved in the investigations launched into world football's governing body and a presidential vote will go ahead Friday.

FIFA presidential candidate Prince Ali Bin al-Hussein described the arrest of six officials of the world football governing body in Switzerland on Wednesday as a "sad day for football".

Al-Hussein, who will challenge Sepp Blatter for the FIFA top spot this Friday, issued a brief statement after the arrests earlier on Wednesday of six FIFA members over corruption charges in Zurich, Switzerland, reports Efe.

"Today is a sad day for football. Clearly, this is a developing story, the details of which are still emerging. It would not be appropriate to comment further at this time," said a note from the Jordanian Prince.

New York prosecutors are investigating those arrested for allegedly having received or paid bribes totalling more than $100 million from the early 1990s until now, according to a Swiss Federal Department of Justice and Police statement.

Those detained were in Zurich for activities at FIFA's world headquarters prior to the organisation's congress on Friday, at which it will elect its president for the next four years.

Al-Hussein is challenging Sepp Blatter in the election, the latter standing for a fifth consecutive term.

I reiterate that I am innocent of any charges: Jack Warner

Former FIFA vice-president Jack Warner said on Wednesday he was innocent of any charges relating to a US Justice Department probe into conspiracy and corruption at the heart of football's world governing body over the last two decades.

The Trinidadian's name was on a list of nine current or former FIFA officials and five business executives who allegedly "abused their positions of trust to acquire millions of dollars in bribes and kickbacks," US Attorney General Loretta Lynch said in New York.

Warner, formerly head of the FIFA's CONCACAF zone, uniting federations from North and Central America as well as the Caribbean, protested his innocence.

"My attention has been drawn to certain developments in world football which started several hours ago and is at the present time still ongoing," he said on his Facebook page.

"It has been reported that a number of FIFA officials have been arrested in Switzerland and that at least one raid conducted by the Federal Bureau of Investigators in Miami is being executed... at what I presume to be CONCACAF offices.

"My name is being reported by international media as being one of those persons sought in connection with the probe.

"The people of Trinidad and Tobago will know that I quit FIFA and international football more than four years ago and that over the past several years I have recommitted my life to the work of improving the lot of every citizen of every creed and race in this nation.

"I have fought fearlessly against all forms of injustice and corruption.

"I have been afforded no due process and I have not even been questioned in this matter. I reiterate that I am innocent of any charges. I have walked away from the politics of world football to immerse myself in the improvement of lives in this country where I shall, God willing, die.

"The actions of FIFA no longer concern me.

Russia says it has 'nothing to hide' after FIFA bid probe

After Swiss prosecutors opened criminal proceedings Wednesday into FIFA's awarding of the 2018 and 2022 World Cups, Russian Sports Minister Vitaly Mutko told The Associated Press "we've got nothing to hide."

Mutko, who is also a FIFA executive committee member and is in Zurich for the governing body's congress and presidential election, played a leading role in Russia's bid and said his country welcomes the investigation.

"We're prepared to show everything," Mutko said in a telephone interview. "We've always acted within the law. We've got nothing to hide."

Swiss authorities said they are investigating the awarding of the 2018 World Cup to Russia and the 2022 tournament to Qatar. In a separate U.S. investigation, 14 people were indicted on corruption charges and seven of them were arrested in Zurich.

Mutko said the investigations will not hinder Russia's preparations for the 2018 tournament.

"How can it be obstructed? ... We have a contract with FIFA and we're getting ready to hold the draw," Mutko said. "We operated within the regulations that existed at that time."

Alexei Sorokin, who headed Russia's bid committee and now runs the organizing committee, also said there had been no wrongdoing.

"We have stated that many times during the investigation by FIFA and before that investigation," Sorokin said by telephone from Zurich. "Preparations to host the World Cup are continuing and they are going according to plan."

Russia was largely cleared by a FIFA report published in December, although it was noted that the Russians had failed to provide much information because they said the bid committee's computers had been destroyed.

Both Sorokin and Mutko said that they had not been contacted by investigators in connection with Wednesday's developments.

Arsenal manager Arsene Wenger was of the opinion that the corruption rumours must end once and for all. He also questioned FBI's role in stopping the mess.

“I prefer the whole inquiry is finished and done well and the rumours disappear. There is nothing worse than rumours. Or they kill it and come out and say there was nothing wrong in it so we can move on, or the people who have done wrong are punished. Then of course you want to have a new start. Let’s wait until the conclusions come out. It is for sure that we have to move on and not continue to think… the rumours have to be killed, that is for sure.”

“What is embarrassing [for football] is you wonder what the FBI are doing in there, I don’t know,” said Wenger.

“Nothing has been proven. Sometimes we are too quick to convict people who have not been proven guilty, so we have to be very cautious.”