Saint Petersburg: I craned my neck to look at the ceiling. A bespectacled man with raised eyebrows glared straight back at me. I recognised the face. In this room of mirrors, I could finally have the morbid pleasure of watching myself work.

This is what you get for bad hotel choices. I shared the room with a friend, who is also working as a journalist here, and to our chagrin, we realised that the hotel doubled up as a sex parlour. Our pleasure at staying in the centre of Saint Petersburg was brought to earth as soon as we reached the building; its blinking red sign on the door in the shape of a woman keeping us honest. 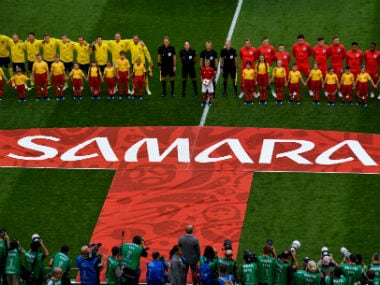 Sweden's and England's players pose prior to the Russia 2018 World Cup quarter-final football match between Sweden and England at the Samara Arena. AFP

There was no elevator but that proved to be the least of our problems. Over the next three days, every time we would enter the hotel, the receptionist would earnestly ask, “Massage?” A show of keys would dispel the confusion, but not before a shade of embarrassment washed over our faces.

Croatia play England at the Luzhniki Stadium in Moscow in Wednesday’s semi-final match at 11.30 pm

The room with multiple mirrors had other surprises in store. Bulbs which emitted multiple hues but remained predominantly pink. A squeaky bed which would grumble at the first touch. Our stay could not end soon, which was at odds with how I viewed the other bits of my time in Russia. Thankfully, there were other memories to distract the mind.

The World Cup of surprises, inevitably, caused a change of plans. The best-laid designs were certain to fail in a tournament which did not have at least one of Argentina, Brazil, or Germany in the semi-finals for the first time ever. So, it was only appropriate that I changed my schedule to make way to Kazan for the quarter-final between Brazil and Belgium.

A late decision meant that the best I could find was a 16-hour train ride from Moscow. After watching England win on penalties in a World Cup, I should have braced myself for other unusual developments. My only co-passenger, Marat, in the coupe was an artist from Kazan who specialised in figurines of popular characters from children’s programmes.

Some have called this the World Cup of the online translator, with the visitors’ bare knowledge of Russian not precluding conversations with a local. However, it demands remarkable patience from all involved. Thankfully, Marat was keen to share all he could. I did not merely learn about his work, but also of the excruciating accident which left a heavily bandaged foot. I wish him a speedy recovery, even as he keeps himself busy with his next creation.

A more difficult conversation occurred in a Belgian bar on the street parallel to Kazan’s main boulevard, Baumana Street. On the night before Brazil was pushed out of the World Cup by a brave performance from Belgium, a group of journalists stumbled upon the most diverse of beer collections. An old man was in charge of the establishment, his sunken eyes and long hair providing a curious image. My curiosity got the better of me as I asked him about the origins of his arrival in Kazan.

The man from Leuven looked at me with a deep pain in his eyes. “I moved here seven years ago because my wife died,” the permanent separation still ringing loud in his voice. I hastened to apologise, and my friend thankfully diverted the discussion to the magnificent resources the bar had. Our Belgian host went on to reveal the range of beers he offers; he remains hopeful of sourcing beers of a thousand variety from his former homeland in the near future.

The following day, drunkenness was a sweet relief for many Brazilian fans whose chants of “Messi tchau! (Goodbye Messi)” were replaced by sombre reflection as their own team stumbled out of the World Cup. It was also time for the tournament to bid goodbye to the marvellous Kazan Arena, a cemetery of champions as Germany, Argentina, and Brazil’s campaigns crashed there. But there was still more to come from the World Cup, and after another night of not enough sleep, we made our way to Samara.

The 350-plus kilometre journey has been my only road trip in Russia yet, driven in a Lada by a woman from Kazan called Albina. Unlike most drivers over the past months, she could converse in English and was happy to share her recollections of a trip to India from a couple of years ago. Her generosity was not limited to helping us reach Samara on time; Albina took a break on the way to buy ice creams for us, a gift we were more than happy to receive on a warm day.

Sitting on the pitch inside Samara Arena and watching Russia play Croatia. Definitely among the highlights of this World Cup pic.twitter.com/H24K1pRFno

As we reached Samara, the temperature rose further. A long walk to the stadium under the scorching sun sapped energy, the England-Sweden quarter-final impacted the morale. But even on such tiresome days, slivers of joy erupted. After completing our work for the day, as my friend and I walked towards the exit at Samara Arena, we overheard a loud cheer from the stadium. Intrigued, we approached a volunteer who informed us that the match between Russia and Croatia was being broadcast on the large screen.

We made our way inside hurriedly, only to find people spread all over the pitch. This was a chance to walk on the field, and hopefully gather an essence of the football that was played there. It was also an opportunity to sit in the dugout where England had rested a few hours ago. I did not have a waistcoat but I could strut around in the technical area like Gareth Southgate. Thankfully this time, there were no mirrors to capture my reflection. That job was left to phone cameras, where a flicker of the World Cup could be stored.