Milan: Gian Piero Ventura defended "one of the best records in 40 years" on Wednesday as he refused to resign as Italy coach despite failing to lead the four-time champions to the World Cup finals.

"I lost only two games in two years," Ventura told Italian television show Le Iene in a brief interview as he boarded a flight to Bari. 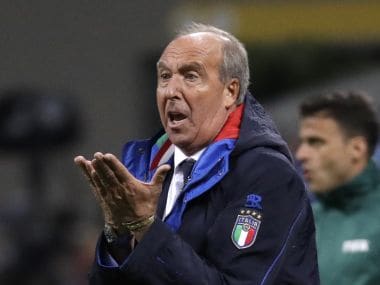 The 69-year-old is under contract until June 2020 but has not resigned despite a 1-0 aggregate play-off defeat to Sweden that saw Italy miss the World Cup for the first time in 60 years.

"I apologised to Italians for this result. It's horrible to see a World Cup without Italy, but it's done now and I can't do anything about it."

Ventura disagreed with the journalist interviewing him that the Azzurri had played "very badly" for the past two years.

"No, because my record is one of the best of the last 40 years. I lost only two games in two years," added Ventura.

The coach's future should be decided during a meeting of the Italian football federation in Rome on Wednesday.

Since the former Torino coach took over in July 2016 Italy have lost three matches — against France in Bari (3-1), Spain in Madrid (3-0) and against Sweden in the World Cup first-leg play-off in Solna (1-0) — winning nine and drawing four.

It has been estimated that Italy's failure to qualify for the World Cup for the first time since 1958 could cost the economy  €1 billion in lost sponsorship and business.

"It will be sad. But what can I do? Unfortunately it's done," added the Italy coach.

The former Torino coach said he would first talk to the Italian football federation president Carlo Tavecchio, who is also under pressure to resign, before making a decision on his future.

"Resign? I don't know. I have to evaluate an infinity of things. I have not yet spoken to the president," said Ventura.

"It doesn't depend on me, I'm not in the state of mind to face this question."

Former Chelsea and Real Madrid manager Carlo Ancelotti has been touted by the Italian press as the favourite to replace Ventura, as the 58-year-old Italian is free since being sacked by Bayern Munich.