Matthaus, who led Germany to 1990 World Cup triumph and also played in 1986 finals, feels that 'Albicelestes' have too many players for a single position.

"When you see the Argentine team, you will see they have 10 great strikers. But you can't play only strikers, you need defenders too," Matthaus, who had some great rivalries with Diego Maradona at the international level as well as Serie A, told PTI during an interaction on Thursday. 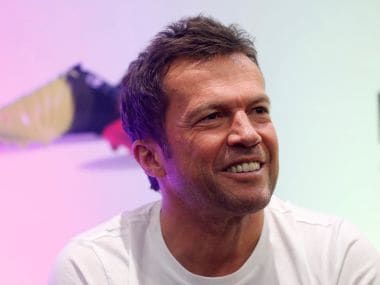 "I know the quality Argentina team has but most players play in the same position. Messi, (Sergio) Ageuro, (Gonzalo) Higuain, (Mauro) Icardi, (Paulo) Dybala everybody plays in the offence but then you need midfielders and you need a good defence, you need a good goalie," Matthaus said on the sidelines of 'Royal Stag Barrel Select Perfect Strokes' event.

In 18 matches in the World Cup qualifiers, Argentina conceded as many as 16 goals, which may be the reason for Matthaus' observation.

"The Argentine coach (Jorge Sampaoli) is lucky he has a good offence but unlucky that he has a bad defence. There was so much nervousness till they won against Ecuador in their last game. It would have been a shame if Argentina would not have qualified for the next year's World Cup," said Matthaus.

While it is a well-known fact, Matthaus made it clear that Argentina are not half as good a team if Messi is not around.

"Argentina without Messi and Portugal without Cristiano (Ronaldo) cannot give the same results as they give with them. It's not about just scoring goals. These two are magicians who know how to score at crucial junctures," the Bayern Munich and Inter Milan legend said.

"It's irrelevant whether it's good or bad. What is possible (such a deal) is possible!

"Paris had this kind of money to bid for Neymar — not only for the transfer fee but also the salary. I know the PSG president (Nasser Al Khelaifi). I know they have not only invested to win the Ligue 1 in France or the Champions League but the investment is to make PSG's name more famous, more public. Neymar is also face for Qatar 2022 World Cup," said Matthaus.

Over the years, the German national team has seen presence of coloured players including the likes of Jerome Boateng and Sami Khedira, and Matthaus believes that it is because they are integrated into their social system from the onset.

"We have always had a nice system of integration and don't forget most of these players have been born in Germany."

He added: "The likes of Boateng and Khedira have not just come here in search of a German passport. They have grown up in German culture, learned the language, German mentality and above everything, they love to play football. They are German passport holders from the start of their lives."

Matthaus is happy that unlike some of the other European nations, Germany does not readily integrate South American professionals especially Brazilians, who arrive in European countries to make a career in football and then get into national teams with respective country providing them citizenship.

"It's different from somebody coming in and getting a passport in three years. I know Brazilian players coming and playing in other leagues. But here you have to be born in Germany to have rights to play for the country. I was the national coach of Bulgaria. There was this Brazilian player playing there in the league and he got a Bulgarian passport," he recollected his stint in the East European nation back in 2010-11.

"But we (Germany) don't just bring anyone and give them passport in order to get better results. You have to build your players and athletes. At the U-17 levels, there are players who don't possess my skin colour yet they are going up the system," he signed off.