World football governing body's vice-president Prince Ali Bin Al-Hussein on Monday backed India's bid to host the 2017 FIFA Under-17 World Cup, saying that the country was crucial for the overall development of the game in the continent.

"I support India's bid to host the 2017 FIFA U-17 World Cup. India is an important country in Asia and a crucial one for growth of the game," Al Hussein, of the royal family of Jordan, said at the sidelines a grassroot programme here.

The FIFA Executive Committee, of which Al Hussein is a member, is expected to name the host country for the 2017 FIFA Under-17 World Cup later this year. 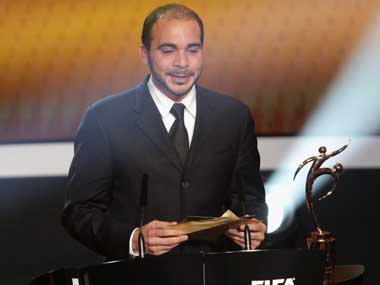 The FIFA Executive Committee, of which Al Hussein is a member, is expected to name the host country for the 2017 FIFA Under-17 World Cup later this year. Getty Images

Al Hussein, one of the eight vice-presidents of the FIFA, said that India should also be given representation in the AFC Champions League, Asia's top-tier club competition.

"India should also be given representation in the AFC Champions League," Al Hussein said.

India does not get direct berth in the AFC Champions League mainly because of lack of infrastructure in the country.

Al Hussein was talking to reporters after launching a grassroot initiative "Kick for Hope" to be run by NGO Magic Bus in collaboration with his brainchild Asian Football Development Project.

He unveiled the AFDP-Pepsico sponsored jerseys and distributed them among underprivileged girl footballers from the Magic Bus India foundation's teams.

"The AFDP is an independent initiative and not under the FIFA or the AFC. Our activities now spread in 17 countries," Al Hussein said.

Asian football witnessed turbulent times recently with its president Mohamed Bin Hammam's involvement in a corruption scandal which ended with the election of a new chief Sheikh Salman bin Ebrahim Al Khalifa of Bahrain earlier in the month, and Al Hussien said it's time to move on.

"Asian football have faced turbulent times but it's time to move on from the past. We need to build the game in Asia now. We need active cooperation of all national federations to root out corruption in the game in Asia, including match fixing issues," he said.