Click here for live coverage of the match between Spain and Korea DPR.

Click here for live coverage of the match between Niger and Brazil.

Kochi: European champions Spain will enter their final group match against DPR Korea as the firm favourites, looking to secure a Round of 16 berth in the FIFA U-17 World Cup on Friday.

Spain are placed second in Group D behind leader Brazil, to whom they lost 1-2 in their tournament opener. 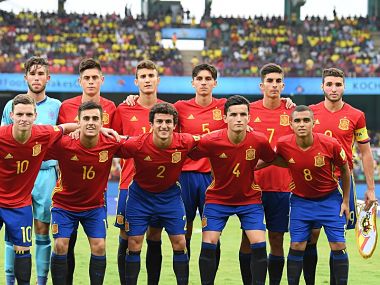 They bounced back from that reverse in style and notched up a 4-0 victory over Niger in their second game.

Now, they are raring to go as they lock horns with the bottom-placed North Koreans, who have lost both their matches to Niger and Brazil.

The Koreans are unlikely to test the tactically superior Spanish side at the Jawaharlal Nehru Stadium.

Abel Ruiz, who plays for Bracelona's B team, was in great form against Niger, scoring a brace and he will look to continue in same vein.

The likes of Ferran Torres and Sergio Gomez will also prove to be tough propositions for the North Koreans, who can take solace from the fighting outing against the formidable Brazilians in their last match.

Spain had come into the tournament as one of the title favourites. They had also started well against the South American giants, taking an early lead through an own goal, before defensive lapses saw them go down 1-2.