After a pulsating 22 days of action culminated in England clinching the coveted FIFA U-17 World Cup title, Firstpost asked its football correspondents and freelancers to weigh in on what they thought were the best moments of the edition, the standout player of the tournament and the biggest disappointment of the World Cup. Here's who they picked as their standout player of the tournament:

Jann Fiete-Arp is the 'number 9' Germany were waiting for ever since Miroslav Klose hung up his boots. The onus will be on the 17-year-old Hamburg striker in the coming years to deliver for the national team, which is obsessed with the concept of 'False 9' — essentially relying on an attacking midfielder for goals. For example, Mario Gotze. However, Arp exceeded expectations in India, scoring five goals in five matches. That is not to say that he is more than just goals.

A keen admirer of Harry Kane, Arp loves to get involved in the build-up to goals and create chances for the wingers. In the 428 minutes he played in India, he was clinical from the very first minute. He terrorised the Costa Rican defence to open his account at the world event. He would go on to score in every game except the 4-0 thrashing Germany endured at the hands of Iran in the second group stage match.

A striker has to have everything in his armoury to become a target man where the whole team creates chances after chances for a true 'number 9'. It was a job well done as Arp did enough to stamp his authority on the world stage.

Interestingly on Saturday, Arp became the first player born in the new millennium to score in the Bundesliga as he struck in Hamburg's 2-1 defeat at Hertha Berlin. He just fits the bill. 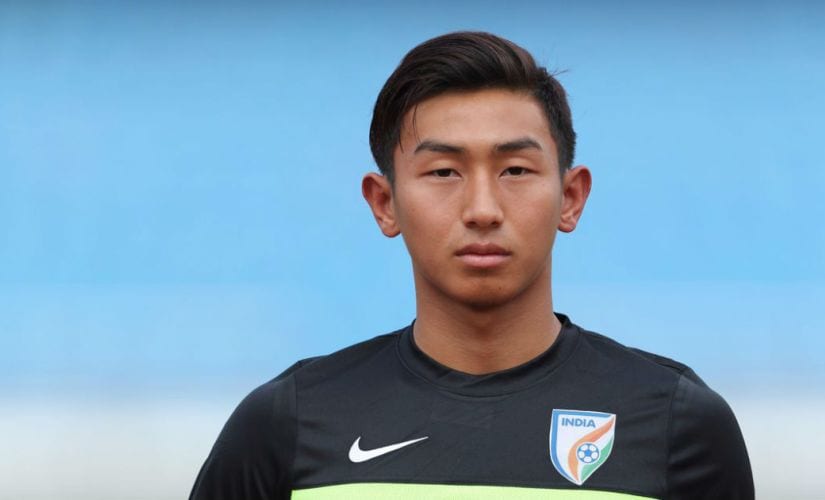 Of course everyone will say Phil Foden or Abel Ruiz or Rhian Brewster or Paulinho. But I'd rather go with India goalkeeper Dheeraj Singh Moirangthem. Of course, India conceded nine goals with him under the bar. But his acrobatic saves and his reflexes raises hopes that India may have found a star for the future. The Indian goal-keeper saved 16 shots in three matches at a save rate of 64 percent, according to FIFA.com. That explains why teams like Scotland's Motherwell, Australia's Perth Glory and a Brazilian club are interested in signing him.

When the Young Lions arrived in Kolkata in the first week of October, not many were aware of Manchester City’s Philip Foden, with his former teammate Jadon Sancho being the centre of attraction. The soft-spoken midfielder, dubbed as ‘the Stockport Iniesta’ in England’s youth circuit has since captured the imagination of fans and how!

From his first goal though an excellent volley against Mexico to his brace in the final against Spain, Phil Foden was the architect of England’s World Cup win. Pep Guardiola visibly beams whenever the youngster is mentioned and Foden proved time and again over the last month why he is so highly rated.

An illustrious passing range, terrific close control, an excellent shot, vision far beyond his age to exploit spaces, nerves of steel and exceptional workrate — you name it and Foden has it. Foden, the ‘Golden Ball’ winner, orchestrated attacking manoeuvres and finished them — his brilliance on the right inside channel helped the likes of Callum Hudson-Odoi and Rhian Brewster to flourish.
Only time will tell whether the Young Lions flourish in senior international football as well, but Foden is undoubtedly the country’s best hope to make it big at the senior level.

He was the hipster’s choice. He was also the popular choice. Phil Foden, with his drifting runs and his suave left foot, won admirers across the board. Pep Guardiola had already unabashedly praised him months ago. The Manchester City manager’s appreciation of Foden only grew over the course of this World Cup.

With three goals and an assist to his name, the Stockport-born playmaker was a worthy winner of the Golden Ball. He, of course, had a role in other England goals too. Placed on the right flank, Foden often moved horizontally to influence play in central areas. His swift movement made it difficult for the opposition to pick him up between the lines of midfield and defence.

Foden saved his best for the last as he ravaged an ascendant Spain in the final. Despite finding his side two goals down, the Manchester City teenager kept probing the opposition and eventually made the breakthroughs he sought. As the game progressed, Foden stood tall above everyone else. His ability to find a pass and make driving runs into the box was too much for the Spanish defence to handle. A brace in the final was a worthy return for Foden’s magnificent display.

This is an obvious one. When England landed in India, everyone was talking about Jadon Sancho. Now after the World Cup is over, Sancho seems like he was smokescreen for Philip Foden. Foden, a Manchester City youth player, is a versatile attacking midfielder. He isn't too flashy but he does a lot of things very well on a football field. His passing ability is top-notch, his vision and awareness on the field is superb and he is a good finisher. He has that rare ability to make other players around him look better.

Yes, Sancho scored three goals in the group stages and Rhian Brewster went on scoring spree when Sancho was called up by his club Borussia Dortmund, but Foden was the one pulling the strings. It was clear that he was the focal point of all English attacks. And he was rightly awarded the Golden Ball. Very few Premier League teams put faith in their young players and they hardly get a chance to develop. If Foden gets the right support and ample opportunities, he has a bright future ahead of him.

Yacine Adli might not have taken his French side beyond the Round of 16 but the ones who watched the PSG starlet would testify that things do start happening when the ball is at his feet. Five assists and a goal in four appearances isn’t a bad return. Rhian Brewster. While Phil Foden rightly won the Golden Ball for running the show in midfield for England, Brewster made his efforts count. The former Chelsea youngster, who joined Liverpool in 2015, has escaped under the radar when the English replete with starlets arrived in India. His stocks may have further fallen when he missed a sitter in the opening minutes of the Young Lions’ group stage game against Mexico.

But like all top players do, he didn’t sulk and got on with the job. Later in the first half, Brewster fired in a sublime free-kick to open his account for the tournament. There was no looking back from there. Brewster scored hat-tricks in the quarter-final against a formidable United States side, and against the mighty Brazil in the semi-final. His talented teammates made it easier for him, but that must take nothing away from the feat. Even coach Steve Cooper, who usually refrains from praising or criticising an individual performance, hailed Brewster for his remarkable achievement.

However, after seven goals, and two hat-tricks, his most crucial goal came in the final when he helped England pull a goal back against Spain just before half time that triggered the incredible English comeback. The fact that Jurgen Klopp took out few minutes of his post-game interview after Liverpool beat Huddersfield in the Premier League to congratulate the youngster, goes to show what a special player he is.