As the full-time whistle blew at the packed Yuva Bharati Krirangan on Saturday, footballing history was being re-written. In a first ever FIFA game officiated by a female referee, New Caledonia took home their first point of the FIFA U-17 World Cup when they held heavyweights Japan to a 1-1 draw.

While the disappointed and tired young Japanese faces looked around in disbelief, the elation in the body language of the New Caledonians was hard to miss. Dominique Wacalie, the New Caledonia coach would later go on to express the sheer significance of what his boys had pulled off against Japan.

“The result was really important; it is a huge point for our country. People will follow football more now. We were determined throughout. New Caledonians are warriors, we fight to strive for success," Wacalie said after the game and he was correct — the likes of Jekob Jeno and Gaizka Ipeze didn’t stop fighting for every inch of the pitch until the last minute, unlike their opponents whose complacency frustrated their manager and embarrassed their fans. 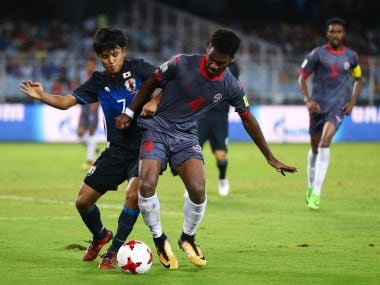 Takefusa Kubo (L) of Japan battles for the ball with Kiam Wanesse of New Caledonia during the FIFA U-17 World Cup. Getty

Japan are one of the finest sides in this year’s World Cup — their panache was on display during their 6-1 win over Honduras and their tactical acumen shone through during their hard-fought loss to France. But, the U-16 AFC semi-finalists sold themselves short during their encounter with New Caledonia.

Having all but qualified for the knockouts and travelling prior to Saturday’s game, Yoshiro Moriyama decided to field a much-changed Japanese starting XI in order to prevent his key players from getting fatigued before the crucial knockout games, but he didn’t count on his players performing a vanishing act.

“We started well, scored early on but then on our players became inactive and timid. They played under a certain pressure. It was difficult. In the end we’re all disappointed with the result,” told Moriyama.

Japan had started the game in a whirlwind fashion — opening up the New Caledonian defence with absolute ease, as Akito Tanahashi and Keito Nakamura combined to create chances at an alarming rate. Nakamura, who had scored the first hat-trick of the competition against Honduras, handed Japan an early lead — breezing past the Caledonian defence in the seventh minute and finding the net from a difficult angle.

A minute later, Japan would register another shot on target, only to be saved by Ipeze, the 16-year-old goalkeeper making his World Cup debut. At this juncture of the game, it seemed the New Caledonians would face yet another long evening in the park, but things didn’t go according to plan for the Asian nation.

Japan, playing a 4-2-3-1 formation, were fluent passers of the ball as Nakamura continuously found himself in dangerous positions. The 17-year-old was the most eye-catching Japanese player on the pitch, completely owning the right wing. His driving runs into the box and pinpoint crosses pegged New Caledonia back into their own defensive third as they struggled to contend with his pace and read his game.

Shimpei Fukuoka, the Japanese skipper, joined in on the action with some excellent through balls and well-weighed passes, but Ipeze stood strong under all the pressure. Although Japan were the better side in the first half, New Caledonia had a few chances of their own.

Not only did the Oceanian side earn a few free-kicks just outside the edge of the penalty area, Theo Bosshard even had a clear-cut chance to score in the 32nd minute when he was straight through on goal, with just Togo Umeda to beat, but the forward blasted his shot over the bar.

As time passed and Japan looked less and less likely to score the game’s second in spite of having a flurry of chances, New Caledonia grew in confidence. Although on occasions, it was their last-ditch defending which kept Japan from extending their lead, Wacalie’s boys seemed to be enjoying the pressure Japanese put them under and started taking the game to their opponent.

Even before the equalizer came in the 83rd minute, New Caledonia had started to assert themselves in the Japanese half, all the while defending doggedly whenever they conceded possession. Jekob Jeno had an excellent overall game, and the New Caledonia captain’s routine header from a perfectly executed corner brought the house down at the Yuva Bharati Krirangan.

The Kolkata crowd, always cheering on the underdogs, as seen during their vociferous support of Iraq last Sunday and their enthusiastic response during Mexico’s attempted comeback against England, had been in New Caledonia’s corner all evening and urged on the World Cup debutants to create history.

Japan, woken up by the shocking turn of events, attempted to find the winning goal with sustained pressure, but it was too little, too late for Moriyama’s side as they stood on the wrong side of footballing history.

The result didn’t affect Japan’s group standing and France’s 5-1 win over Honduras meant the Asian nation would still finish second. Nakamura and Co will face England in Kolkata in their Round of 16 tie and must improve their finishing by miles, should they desire to have any chance of defeating Steve Cooper’s side, who have looked unassailable till date.