Guwahati: Two-time champions Mexico played out a goalless draw in a high-intensity Group F final game but that was enough for them to qualify for the knock-out stage of the FIFA U-17 World Cup on Saturday.

Mexico ended their group engagements with just two points with two draws and finished third in Group F, behind England and Iraq. They still qualified for the round of 16 as one of the four best third-placed teams. 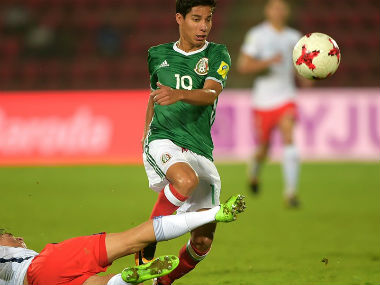 Diego Lainez of Mexico and Martin Lara of Chile in action. Getty Images

They had drawn with Iraq 1-1 in their campaign opener before losing to England 2-3 in their second group match.

The Central American champions are the only side in this edition to qualify for the knock-out round without a win.

Chile, on the other hand, crashed out of the tournament with just a point from today's draw. They had lost to England 0-4 and to Iraq 0-3 in their earlier two matches to finish last in the four-team group.

The South Americans needed a win to advance to the round of 16 but they had very few shots on the Mexico goal and they were mostly defending their citadel for the most part of the match, which ended as the first goalless draw of the group stage of the tournament.

Mexico had the majority of the ball possession with 69 percent of eight shots on target against one for Chile in the match played at Indira Gandhi Athletics Stadium under 26 degree Celsius but with a high humidity.

Jairo Torres and Roberto de la Rosa were in the thick of things in most of Mexico attacks but Chile's star goalkeeper Julio Borquez foiled their attempts several times.

De la Rosa saw a shot from him being saved by Borquez in the 20th minute. Borquez was up to the task in the 24th minute off a shot from Diego Lainez and two minutes later he pulled off another save from a shot by Luis Olivas.

In the second half also, Borquez made a series of saves including the one from Torres late in the match.

Mexico got their best chance in the injury time and could have won the match but for the crossbar.

In search of a goal, all of Chile's 11 players, including the goalkeeper Borquez, pressed into attacking. But Borquez lost the ball well outside the box and Mexico's De La Rosa had all the time to slot the ball home but he hit the crossbar.