Iraq secured their maiden World Cup win against Chile with an emphatic 3-0 result as Mexico’s loss to England handed the Asian champions a realistic chance of progressing to the knockouts of U-17 World Cup. Drawn into a tough Group F, Iraq were the underdogs coming into this competition but their familiarity with the Indian conditions, an intensive pre-tournament preparation and youngsters with extensive experience of playing together at this level have helped Qahtan Chathir’s side script one of the feel-good stories of the tournament.

The 1-1 draw against Mexico testified Iraq’s resilience, but their win over Chile, as they completely outplayed the Latin American nation, could be the watershed moment for Iraqi football. Iraq chose to play out from the back, carefully crafting passes and outwitting the Chilean midfield, in a stark contrast to their direct football against Mexico, as evidenced by Chathir’s post-match declaration that Iraq “have a different strategy for each game”. 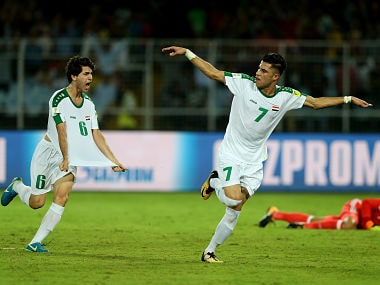 Mohammed Dawood of Iraq celebrates his goal during the FIFA U-17 World Cup India 2017 group F match between Iraq and Mexico. Getty

Iraq, as previously proven in the U-16 AFC Cup and against Mexico in the World Cup opener, relies heavily on Mohammed Ridha’s link-up play and Mohammed Dawood’s attacking prowess to create goalscoring chances.

Dawood, a self-proclaimed Shah Rukh Khan fan, found a second home in Kolkata as the Yuva Bharati crowd cheered on his every touch of the ball. Buoyed by the fans’ support and with the will to prove himself at the highest level, Dawood was undoubtedly the best player on the pitch.

Not only did the Iraq’s No 7, who models his game on Younis Mahmoud, give his team an early lead in the first half, but his curling free-kick in the second half took the sails out of Chile and gave Iraq a much-needed cushion to play their natural game. The forward could have registered a hat-trick, had he not fluffed his late penalty.

Chile, for that matter, did not do themselves any favour. Mistakes all across the pitch, right from the first minute, only allowed Iraq to flourish. It seemed Hernan Caputto’s side had not learnt any lesson from their 4-0 loss to England in the first game.

The fashion in which Chile conceded its third goal spoke volumes about the kind of game Chile had–an Iraqi corner missed by everyone in the box was deflected off Diego Valencia into Chile’s net.

Rodrigo Cancino, playing in goal instead of the suspended Borquez, failed to command his box in set-piece situations and struggled in making routine saves. On another night, another goalkeeper might have saved both of Dawood’s goals but Cancino was simply not up to the mark.

The disjointed defence which toiled hard but floundered even the easiest of clearances and a midfield which laboured to mount attacks, only added to Chile’s woes. Antonio Diaz, once again the sole bright spot in an otherwise lacklustre Chile attack, often cut an isolated figure as the CD O’Higgins winger tried to do too much on his own.

On the eve of the senior Chilean national team’s failure to qualify for the 2018 FIFA World Cup, the South American nation would have turned to their famed youngsters, who earlier this year, took everyone by surprise when they made it to the U-17 CONMEBOL finals.

It wasn't Chile’s incompetency to finish the simplest of passes which frustrated their manager and the spectators, but it was the absolute lack of intent. While Iraq played their heart out and celebrated each goal like their life depended on it, continuing to attack until the last minute, Chile kept making schoolboy errors. On occasions, it seemed the La Roja juniors had completely forgotten how to play football, and it does not bode well for the nation’s future when it comes to ‘the beautiful game’.

“It will be hard to lift the players, but against Mexico we will leave everything on pitch. We have not shown the true level that this team has,” Caputto lamented before adding Chile will “look to show the level of football which helped them qualify for the U-17 World Cup.” Qualification for the knockouts seems distant, but Chile will look to end on a positive note, for the Chilean Football Federation needs to go back to the drawing board to revive La Roja’s footballing future in all tiers.

Iraq will play England in their last game at Guwahati and if their performances in the first two games are any indication, the Asian champions will give the group leaders a tough fight and their pragmatic approach to every opponent will produce an intriguing tactical contest.