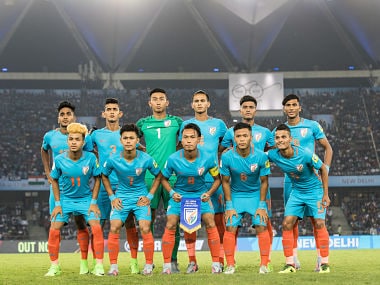 Click here to follow the live score and updates of the Group B match between Paraguay and New Zealand.

Preview: After putting up a brave fight against the USA in their Group A opener in the FIFA U-17 World Cup India 2017, the Indian U-17 National Team coach Luis Norton de Matos asserted his side are ready to take on Colombia on Monday.

Colombia lost 1-0 against Ghana in the opening match of Group A and although the South-Americans are level on points with India (both have zero points), the Indian colts are at the bottom (courtesy goal difference).

A win for India would propel them to stay in contention for qualification for the next stage of the FIFA U-17 World Cup.

Head Coach of the Indian U-17s Luis Norton de Matos wasn't willing to read much into the opposition on Saturday but said: "The team will fight to the last minute and play with confidence giving Colombia a run for their money.

"Colombia are tough opponents and they possess the necessary elements to hurt us. We have to be on our toes all throughout and have to focus on the task at hand. They (Colombia) will also give us a tough physical fight but we are ready for it.

"We will play to win. There is no other alternative for us. Every match we play is to win and if we win against Colombia we will be creating history

"The eventual target is to secure progression to the next stage whilst taking one game at a time. The strength of the Indian team is their collective ability to play football as a combined unit and we bank on that factor to help us win against Colombia."

Matos also said his wards were shy in expressing themselves in the first group-stage fixture against the US.

"Against USA, we had a nervy start and the players were shy and could not play their game against a team of the quality of USA. It was their first match ever in a FIFA World Cup and emotions can be a little hard to control when you play in front of 55,000 people for the very first time," the Portuguese said.

Meanwhile, the players are all geared up for the next challenge.

"Winning and losing are part of football. What matters is how well we recover ourselves and learn from our losses and continue to move forward," said team's star winger Komal Thatal.

"We will give it our very best as it is a do-or-die game for us if we have to remain in contention of progression," he added.

Meanwhile, Aniket Jadhav brushed aside the pressure and said: "Pressure is always there when you play football. We had pressure in the first game and we gave the USA a very tough fight. It will be there against Colombia as well, but this time we are not looking to give a tough fight, we are looking to win."

Skipper Amarjit Singh said: "At the same time we have huge respect for Colombia. They are one of the best teams of their region. But this is a matter of survival for us and we will do everything to be in contention of progression."

The Indian U-17s had played Colombia in a four-nation tournament in Mexico City, Mexico where the colts lost 3-0.

When asked if the team learned anything from that outing, Matos said: "Every match is a new match as every day is a new day and playing in a FIFA World Cup is a different challenge for both teams as compared with a friendly match. It will be a different setting altogether with different tactics and technicalities."