FIFA U-17 World Cup 2017: Germany bounce back with win over Guinea, face Colombia in Round of 16

Kochi: European powerhouse Germany bounced back from their shock defeat in the previous match as they beat African side Guinea 3-1 to qualify for the knockout round of the FIFA U-17 World Cup on Friday.

Germany scored through Jan-Fiete Arp (8th minute), Nicolas Kuehn (62nd) and Sahverdi Cetin (90+2), while Ibrahima Soumah got the lone goal for Guinea in the 26th minute in the final Group C match at the Jawaharlal Nehru International Stadium. 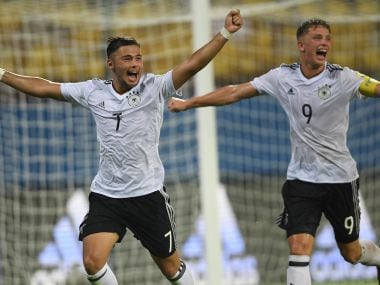 Iran, who beat Costa Rica 3-0 in another group match in Goa on Friday, topped the pool with nine points and an all-win record.

Guinea and Costa Rica were knocked out of the tournament with a point each.

In an open match, Guinea had more possession of the ball with 55 per cent and even had more shots, but most of them were off the target. The African side had just two shots on target.

Germany had 17 attempts at the Guinea goal but out of them eight were on target.

German captain Arp, who recently made his Bundesliga debut for Hamburg, gave his side an early lead as he fired in a low shot past the goalkeeper after a Guinea defender made a blunder.

Guinea restored parity in the 26th minute with Soumah finding the target with his left-footed shot.

Germany pressed hard towards the close of the first session but Guinea goalkeeper was upto the task.

In the 42nd minute, Elias Abouchabaka's left footed shot from outside the box off an assist by Yannik Keitel was saved by Guinea goalie Mohamed Camara.

In the added time of the first half, Guinea had a chance to take the lead but Aguibou Camara's right-footed shot from outside the box was saved by German goalkeeper Luca Plogmann.

The two teams had chances throughout the second half. Germany took the lead in the 62nd minute off a quick counter attack after Arp set up Kuehn.

Guinea might have equalised a handful of times but Sahverdi Cetin converted a penalty in the second half injury time to seal the issue for Germany.