Guwahati: Honduras pumped in five goals without reply against tournament debutants New Caledonia to record an emphatic win in their second group game of the FIFA U-17 World Cup on Wednesday.

Carlos Mejia (25th and 42nd) and Patrick Palacios (51st and 88th) struck twice each while Joshua Canales scored the other goal in the 27th minute in the Group E match. 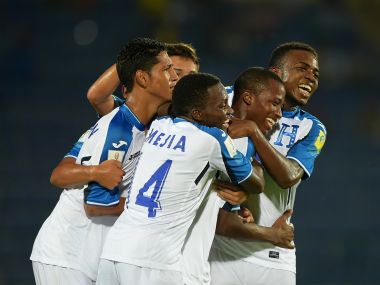 Patrick Palacios (2nd R) of Honduras celebrates with his team after scoring a goal against New Caledonia. Getty

Honduras, who had lost to Japan 1-6 in their campaign opener, now have three points from today's win and they are still contention for a knock-out berth. They play against France on October 14 in their final group game.

New Caledonia, on the other hand, are virtually out of the tournament, having suffered a 1-7 thrashing at the hands of France in their opening match. They play Japan on October 14 in their final group game.

Today's win was Honduras' biggest at a U-17 World Cup since their first appearance in 2007 in South Korea.

The match at the Indira Gandhi Athletic Stadium began on an even keel but just past the midway point of the first half, the Central Americans took control of the proceedings with two goals in as many minutes.

Mejia scored the first of his two goals in the 25th minute off a Joshua Canales assist. Two minutes later, Canales himself turned scorer as he struck home a brilliant free-kick.

Mejia then got his second goal just before the breather as he converted a Santiago Cabrera cross to put Los Catrachos three goals up at half-time.

The CONCACAF side extended their advantage six minutes after the break through a Palacios header before he got his second goal of the match two minutes from regulation time to secure Honduras' biggest win at a U-17 World Cup.