It was the summer of 2001 at Stadium of Light in Sunderland, surrounded by collieries all around, when Spain lifted the U-16 European Championship courtesy a prolific showing from its centre forward. Fernando Torres had arrived. The perky striker from Madrid went on to win every possible international honour at the senior level, but it was this tournament when Spain’s ascent to the pinnacle of world football started.

Born around 400 km east of Madrid, on the Mediterranean coast of Valencia, Abel Ruiz was just one-year old at the time. The Valencia youth product, plucked by Barcelona when he was just 11 has quickly progressed through the ranks and made a name for himself akin to a young Torres. 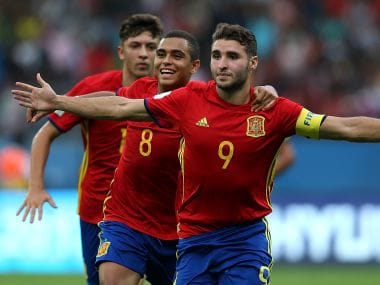 Spain will look to Abel Ruiz for his élan and panache when he leads them to a battle against another continental champion, Mali on Wednesday. GettyImages

In a footballing culture obsessed with passing and more passing, to the point where the opponent is simply transfixed when you finally exploit a gap in the defence and find a team-mate running onto the end of your exquisite through-ball, Abel Ruiz is unique.

A ‘true’ centre-forward in a country which is enamoured by false nines and trequartistas, Ruiz creates chances as well as scores them. He is as comfortable playing with his back towards the goal as he is while exchanging one-twos with his fellow La Masia graduate Sergio Gomez. He can poach the goals in a crowded eighteen-yard box with equal proficiency as he can beat the offside trap to generate and put away clear-cut chances.

“He ticks all the boxes. He scores poachers’ goals, can make goals, take on players and hold the ball up to make goals for other players,” Santiago Denia, Spain U-17 coach once said about Ruiz. The first player born in this millennium to have scored in Spanish Segunda Division, Ruiz is the most experienced campaigner at the U-17 level.

A self-professed Robert Lewandowski fan, Abel Ruiz’s skillset is unlike his compatriots, yet it provides the reigning U-17 European champions their identity. Having already drawn comparisons to the legendary Marco van Basten, Ruiz plays with the air of a man who had never missed a chance in his life.

He does miss a few though, as showcased in the second-half against Iran, when Spain had all but won the game, but Ruiz is Spain’s best bet to win the competition they have never won before. Having mostly flown under the radar for much of their time in India, Spain put their best foot forward in the quarter-finals.

A goal apiece from each of their forward line — Ruiz, Sergio Gomez and Ferran Torres helped Spain book their semi-final berth before Iran got back a consolation goal through substitute Saeid Karimi.

The telepathic understanding between Ruiz, Gomez and Torres, as they interchanged positions and pegged Iran back into their own half, created moments of absolute finesse. Spain did not have much room for error for they were playing a side comfortable with conceding possession for long periods of time, but they played their game at a sublime level which Iran simply could not match.

While Spain’s first goal came due to their persistence, as Ruiz hit the target after the Iranians had blocked two previous shots from him and Gomez, the second was a stunner from Spain’s No 10, curling away from Iran’s custodian Gholam Zadeh to slot into the top right corner.

Yet, it was Ferran Torres’ first goal of the World Cup — a reward after the winger’s profound show of agility, guile and flair on the right wing tormented the Iranian defence the entire ninety minutes — that underlined the versatility of this Spanish attack.

Iran came into the game on the back of an unbeaten run with their steely defence as the backbone of their World Cup campaign. While the scoreline suggests that their otherwise compact defence had a rare off-day, it was rather their midfield which gave away under the Spanish inquisition.

Sharifi and Ghobeishavi were pretty much spectators in the first half as Abbas Chamanian analysed after the game, “We did not start quick and well. We were not in good attacking position in the first 20 minutes of the game. Our big problem today was the coordination between the defenders and the attackers.”

The Iranians failed the test of temperament in the first half, and were consequently outclassed by the Europeans. Only after Antonio Blanco’s withdrawal, did Iran manage to get a foothold into the game and scored through their first real chance of the match. A lapse in concentration from the Spanish centre-halves lit a slim glimmer of hope among the Iranian supporters, but it was too little, too late.

Spain’s leaking backline however has Denia worried ahead of their semi-final clash against Mali, who commented, “Of course, there is room for improvement. We are still conceding goals. We have to improve.”

Whether they manage to improve or not, Spain are in touching distance from their maiden FIFA U-17 World Cup win. And this team, being spoken of in the same breath as the Class of 2009 which had the likes of Isco, Koke and Alvaro Morata in its ranks, will look to Abel Ruiz for his élan and panache when he leads them to a battle against another continental champion, Mali on Wednesday.