Berlin: Germany have injury woes up front for their key World Cup qualifier against Northern Ireland after first-choice striker Timo Werner pulled out on Monday.

After eight straight wins, Germany need just a point in Belfast on Thursday to be sure of a place at Russia 2018.

However, the world champions have both Werner, 21, and veteran striker Mario Gomez sidelined by injury. 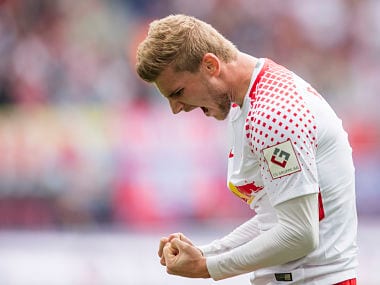 Gomez twisted an ankle last month while Werner is out with neck and spine problems.

The RB Leipzig forward had complained of dizziness in last Wednesday's Champions League game at Besiktas, where the problems first emerged.

"Now is not the time to think about playing, we simply have to make sure that Timo is fit," said Leipzig's coach Ralph Hasenhuettl after Werner missed Sunday's 2-1 Bundesliga win at Cologne.

Germany's head coach Joachim Loew has said he will not call up replacements.

Loew is likely to start either Moenchengladbach's Lars Stindl, Hoffenheim's Sandro Wagner or Manchester City's Leroy Sane up front against the Irish.

Germany are already without goalkeeper Manuel Neuer, out until January with a fractured foot.

In midfield, Loew is missing Mesut Ozil, Sami Khedira and Mario Goetze, who is still below-par after having only returned in August following seven months off with a metabolic disorder.

Germany expect a tough match in Belfast, where Northern Ireland have yet to concede a goal in their four home qualifiers so far.

The world champions ran out 2-0 winners when the teams met in Hanover last October.