Roger Federer's late bid to secure his customary place in the season-ending ATP World Tour finals began with a routine opening round win over Adrian Mannarino in his home town tournament in Basel on Monday.

The 32-year-old Swiss former world number one, in danger of missing out on the eight-man season finale, earned a 6-4 6-2 victory to the delight of the his home fans. 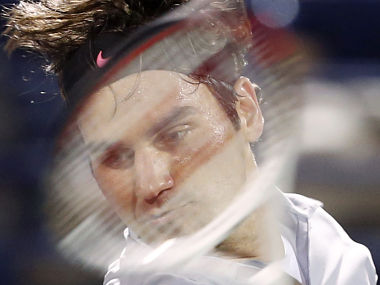 Federer's lean year has meant he has slipped to eighth in the ATP Race standings. Reuters

Federer's lean year has meant he has slipped to eighth in the ATP Race standings, below compatriot Stanislas Wawrinka and with Frenchmen Richard Gasquet and Jo-Wilfried Tsonga both breathing down his neck.

Gasquet, who won the title in Moscow on Sunday is 25 points Federer and Tsonga 90 adrift.

Gasquet is also in action in Basel and, with 500 points on offer for the champion, he will be waiting to pounce should Federer suffer an early exit.

Next week's Paris Masters is the final event of the ATP season in which players can earn points to qualify for London.

The cut-off point for the ATP Tour finals in London will go down to ninth in the rankings as Wimbledon champion Andy Murray has already withdrawn because of back surgery.

Federer has qualified for the season-ender every year since 2002, winning it six times.