The Mercedes-Benz W196 with which legendary Argentine racing driver Juan Manuel Fangio won the second of his five Formula One world titles was sold Friday at auction for 17.5 million pounds ($26.4 million).

The sum sets a record for a car sold at auction, this one being held on the 20th anniversary of the Goodwood Festival of Speed in Chichester, England. 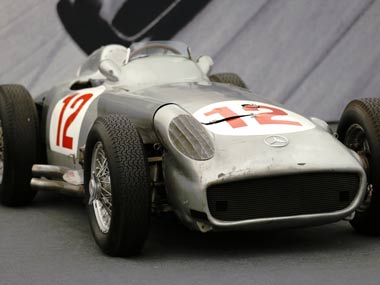 The Mercedes was acquired by a private buyer who put in his bid over the phone, auctioneer Bonhams said.

"We always knew that it was a very, very important car," James Knight, group motoring director at Bonhams, said of the W196.

The vehicle was also driven by Karl Kling, a teammate of Fangio's, in the 1955 Italian Grand Prix, though in that race the prototype suffered a breakdown in the gearbox.