Europa League: Arsenal concerned as Henrikh Mkhitaryan could miss final against Chelsea due to political tensions

London: Arsenal say they are "hugely concerned" that Henrikh Mkhitaryan could potentially miss the Europa League final against Chelsea in Baku because of tensions between Armenia and Azerbaijan.

The Armenia captain skipped the Gunners' earlier fixture in the competition against Qarabag because of a dispute over the Nagorny Karabakh region, an issue that has Arsenal worried again after they saw off Valencia 7-3 on aggregate on Thursday and qualified for the final, which is being hosted in the Azerbaijani capital on 29 May. 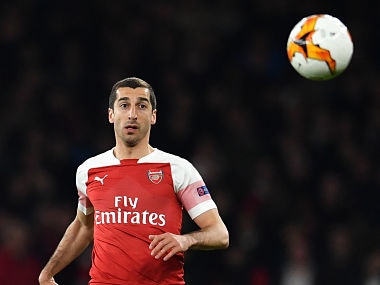 "We are seeking guarantees from UEFA that it will be safe for Henrikh Mkhitaryan to travel to Baku for the Europa League final, which both Arsenal and Micki require for him to be included within our squad," Arsenal said in a statement.

"Acceptable guarantees have not been received yet, and we hope that UEFA will be able to supply these promptly.

"We are of course hugely concerned that the location of the final could lead to Micki not being able to play in a European final."

Azerbaijan and Armenia have feuded over Nagorny Karabakh since Armenian separatists seized the territory in a war that claimed about 30,000 lives in the early 1990s.

A ceasefire was agreed in 1994 but the two countries remain locked in a bitter dispute with frequent exchanges of fire, and tensions are such that Mkhitaryan also did not travel to Azerbaijan with former club Borussia Dortmund for a Europa League match against Galaba FK in 2015.

European governing body UEFA said in a statement to Britain's Press Association: "It is a standard procedure for UEFA to send letters of support to associations, clubs or embassies in order to obtain visas for players and allow them to play in UEFA competition matches."