On Sunday night, Portugal’s hopes of finally winning the European Championship looked like they came to an end in the 25th minute. The Portuguese have gone the most matches without winning the European trophy, and when Cristiano Ronaldo’s two attempts to battle through a knee injury sustained in the seventh minute collision with France’s Dimitri Payet failed, it seemed like the trophy would evade the A Seleção once again.

And yet, at the end of 120 minutes, tears of agony had changed into tears of joy for the main man. The long night at Stade de France ended with Cristiano Ronaldo lifting the trophy for the nation, his memories of heartbreak at 19 years of age against Greece firmly behind him.

After Ronaldo left the pitch, the onus came on every player on the pitch giving in their everything. It’s not like Ronaldo was the focal player in every game, the Real Madrid superstar only made worthwhile contributions in two games — against Wales and Hungary. However, great players have a knack of changing things in seconds and with him off the pitch, it was obviously less likely that they would win. Ronaldo was the probable man to get on the scoresheet. 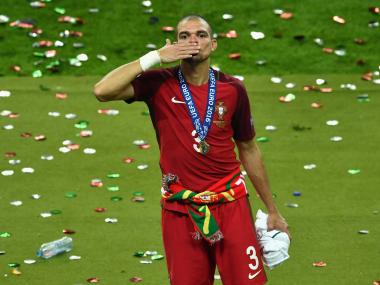 So much for predictions.

It was Eder’s decisive goal in the second period of extra time that ultimately won the battle of wits. The same Eder who was asked to be dropped on numerous occasions by Portuguese fans. They wanted the likes of Hugo Viera, Bruno Moreira among others to get a chance instead. He wasn’t rated by fans or pundits and for good reason. Before his stunning winner against France, he had only scored thrice in 28 international appearances, all goals coming in friendlies.

While Eder would be remembered as the hero of the match, there were another magnificent performances on the pitch. Pepe, a player considered to be an absolute madman on the pitch, was rightfully named the man-of-the-match. He is a player who can back up his cunningness with the requisite smarts. Against Atletico Madrid, his actions were so irking, that Gary Linekar’s five-word tweet: “Pepe is such a dick!” resonated with more than 50,000 people on the social media platform. His second tweet “Pepe is an enormous dick” got even more retweets and likes. The final itself included two simulations and numbers instances of play-acting and afterwards, when he was seen with his tongue sticking out and with a selfie stick, the annoyance caused to anyone who was watching is probably beyond description.

Pepe’s bad behaviour and list of controversies aren’t unknown or new for the football watching world. He was famously awarded a 10-match ban after he shoved his suds at the back of Getafe player Javier Casquero and then tread on his ankle back in 2009. He then smacked Getafe player Juan Albin. As he left the pitch, he shouted “You’re all sons of bitches”. After the game, he said he was “devastated," “disillusioned," “depressed” and had “no desire to return to playing”. He did come back, however, and his subsequent behavioural record hasn’t really shown a change of spots.

People do forget that the reason why the 33-year-old has not been dropped by Real Madrid, has over 300 appearances for Los Blancos is because he marshals the defence well, that he is a solid player who at the end of the day, after all the play-acting and simulations, does his job. The Brazil born defender has been a regular in the national team since his debut in 2007 and now has more than 75 caps and one European trophy to show for it.

Against France, the defender commanded the defence well and gave Rui Patricio, who enjoyed a brilliant outing, lesser to worry about. While Pepe could easily have been the villain of the game had Gignac’s shot gone not rattled the post and gone in, he otherwise enjoyed a solid night controlling the backline alongside Southampton’s Jose Fonte. He made 11 clearances, 3 blocks, 2 interceptions, 1 tackle and crucially made no fouls.

The final is when he really had to step up, especially considering he didn’t play the semi-final against Wales and had to return from injury. He did extremely well except for a couple of moments. He shut down Giroud completely in the air and also closed him down when the Frenchman tried to hold the ball up. He also did well when France was trying to press.

It wasn’t just this game though; Pepe enjoyed a brilliant Euro with great performances against Croatia and Poland specifically. Against Poland, he made 2 tackles, 6 interceptions and 3 clearances. He was comfortably the best player on the pitch and dominated the game. Throughout the tournament, he dominated proceedings, won most aerial duals and anchored a backline that isn’t necessarily the most talented or filled with big names.

Pepe might be “an enormous dick,” but importantly he is a good player and the Sunday final proved that. Villains have ambition, villains have passion. They make stories happen.